Tiau River (or Tio river) a 159 km long river which forms part of the international boundary between India and Myanmar. [1]

It rises near Khuangphah village of Champhai district in Mizoram, India. It ultimately merges with the Tuipui River. [1]

Mizoram is a state in northeastern India, with Aizawl as its capital city. The name is derived from "Mizo", the name of the native inhabitants, and "Ram", which means land, and thus Mizoram means "land of the Mizos". Within the northeast region, it is the southernmost landlocked state, sharing borders with three of the Seven Sister States, namely Tripura, Assam and Manipur. The state also shares a 722-kilometre border with the neighbouring countries of Bangladesh and Myanmar. 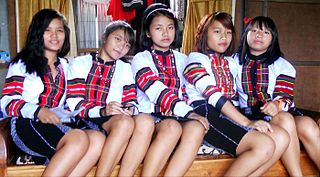 The Mizo people are Zo people native to north-eastern India, this term covers several ethnic peoples who speak various Kuki-Chin languages. The Mizos are indigenous people in the Indian state of Mizoram and its neighboring areas. All Mizo tribes and clans, in their folk legends, claim that Chhinlung/Sinlung/Khul, which means 'enclosed with a rock' in the Mizo language was the cradle of the Mizos.

The Mara are the native inhabitants of Mizoram in India, native to northeastern India, primarily in the Mara Autonomous District Council of the state of Mizoram, where they form the majority of the population. The Maras are related to Kuki and Mizos in India and Kachin, Karen, Shan and Chins in Myanmar. Significant numbers of Maras are also found living south-western and south-central part of Chin State (Burma), in Myanmar - the contiguous area of Mara area in India mostly separated by Kolodyne / Chhimtuipui / Beino river, which forms an international boundary. They were earlier known as the Lakher by outsiders as Tlaikao/Lushai called them by that name and as Zochhia by the Lai and Shendu by the Khumi people, Dai people, Shô people, Matu people, and Rakhaing, and the new name Mara was inserted in List of Scheduled Tribes in Mizoram state in 1978 replacing the old name. The Maras were in early period known to the outside world under different tribal names such as Mara, Lakher, Shendu, Magha, Miram, Baungshel or Shendoo, Maring, Zyu or Zao/Zho, Khuangsai, etc. They constitute a distinct tribal group lying in Siaha / Saiha district of Mizoram, while also occupying northern part of Paletwa township and Matupi township, Western and Southern part of Thlantlang township, Southern part of Haka township. They called themselves "Maras".

Chakhei or Chakhang is one of the villages/towns in Southern part of India's north-eastern state of Mizoram within Mara Autonomous District Council. The inhabitants are mostly Chapi /Hawthai Sizo dialect speaking Mara (Hawthai) tribe who were earlier known to outsiders as Lakher, Zochhia, Miram and Shendu.

Serchhip District is one of the eleven districts of Mizoram state in India. The district occupies an area of 1421.60 km². Serchhip town is the administrative headquarters of the district. This district came into existence on 15 September 1998, being carved out of the larger Aizawl District. Because of the way it was created it includes part of East Lungdar Tehsil and part of Thingsulthliah Tehsil.

Lawngtlai district is one of the eleven districts of Mizoram state in India. The district is bounded on the north by Lunglei district, on the west by Bangladesh, on the south by Myanmar and on the east by Saiha district. The district occupies an area of 2557.10 km². Lawngtlai town is the administrative headquarters of the district.

The Kaladan River is a river in eastern Mizoram State of India, and in Chin State and Rakhine State of western Myanmar. The Kaladan River is called the Chhimtuipui River in India. It forms the international border between India and Burma between 22° 47′ 10" N and 22° 11′ 06" N.

Vaphai is a village at the extreme east of Champhai district of Mizoram. Its original name was "Ivaphai", which literally means "Plains of the river Iva", referring to its original location in the river valley slightly west of its present location. The first syllable got dropped probably by elision in course of time. It is situated at an average altitude of 5,686 feet above sea level.

Rih Dil is a natural lake located in northwestern Chin State in Myanmar. It lies at about 3 kilometers from Zokhawthar, the nearest village situated at an Indo-Burma border. It has a heart-shaped outline. It is about 1 mile in length, half-a-mile in width, about 3 miles in circumference and about 60 feet in depth.

The Kaladan Road Project is a US$484 million project connecting the eastern Indian seaport of Kolkata with Sittwe seaport in Rakhine State, Myanmar by sea. In Myanmar, it will then link Sittwe seaport to Paletwa in Chin State via the Kaladan river boat route, and then from Paletwa by road to Mizoram state in Northeast India. Originally, the project was scheduled to be completed by 2014, but is expected to be operational only by 2019-2020 as all components of the project, including Sittwe port and power, river dredging, Paletwa jetty, have been completed, except the under construction Zorinpui-Paletwa road, construction of which commenced in April 2018.

The Chhimtuipui river, also known as the Chhimmtuipi Lui or Kaladan river, is a river of Mizoram, northeastern India. It flows in a southerly direction through Myanmar.

Mizoram is a land of rolling hills, valleys, rivers and lakes in Northeast India. As many as 21 major hills ranges or peaks of different heights run through the length and breadth of the state, with plains scattered here and there. The average height of the hills to the west of the state are about 1,000 metres. These gradually rise up to 1,300 metres to the east. Some areas, however, have higher ranges which go up to a height of over 2,000 metres.

Phawngpui National Park or Phawngpui Blue Mountain National Park is one of the two national parks of India in Mizoram, the other and the larger being Murlen National Park. It is about 300 km from the main city Aizawl, located in the Lawngtlai district, towards the southeast of Mizoram and relatively close to Burma. It bears the name of the mountain Phawngpui, often called the Blue Mountain of Mizoram, which is the highest mountain peak in the state, reaching 2,157 m asl. The national park covers the entire mountain along with the surrounding reserve forest.

Zokhawthar is a village in the Champhai district of Mizoram, India. It is located in the Khawzawl R.D. Block, on the India–Myanmar border, near the Rih Dil lake. On the Myanmar side is Khawmawi village accessible via a bridge built over the Harhva river.

Mizoram is a state in the northeast of India. Mizoram is considered by many as a beautiful place due to its dramatic landscape and pleasant climate. There have been many attempts to increase revenue through tourism but many potential tourists find the lack of amenities to be a hurdle. However, the State continues to promote itself and many projects have been initiated. The tourism ministry continues to maintain or upgrade its tourist lodges throughout the state. Foreign tourists are required to obtain an 'inner line permit' under the special permit before visiting. The permit can be obtained from Indian missions abroad for a limited number of days or direct from Mizoram Government authorities within India. The state is rich in bird diversity, which has the potentiality to make it a major birding destination. For Mrs Hume's pheasant, Mizoram is a stronghold. There is also a rare record of the wild water buffalo from the state. There are several past records of the Sumatran rhinoceros from Mizoram, then Lushai Hills. The small population of wild elephants can be seen in Ngengpui and Dampa Sanctuaries. Some of the interesting sites are Mizo Poets' Square also known as Mizo Hlakungpui Mual in Mizo, the Great Megaliths locally known as 'Kawtchhuah Ropui'.

The Lungleng river, also known as the Lungleng Lui, is a river of Mizoram, northeastern India. It flows in a southerly direction towards Myanmar.

Rikhawdar, next to Khawmawi, is a border town in Falam District, Chin State, Myanmar. It lies next to Zokhawthar village of the Champhai district of Mizoram, India.