Tibacuy is a municipality and town of Colombia in the department of Cundinamarca, in Sumapaz Province. Tibacuy is situated south of the Altiplano Cundiboyacense in the Eastern Ranges of the Colombian Andes at 87 kilometres (54 mi) southeast of the capital Bogotá. [1]

In the Chibcha language of the Muisca and Panche, Tibacuy means "official chief". [1]

The area of Tibacuy was inhabited by the Muisca and the Panche with the Sutagao living to the southeast. The present town centre is situated at a lower altitude than the original indigenous village. Modern Tibacuy was founded between 13th and 17th of February 1592 by Bernardino de Albornoz. [1]

In Cumaca, rural part of Tibacuy, petroglyphs have been found. [1]

Pasca is a town and municipality in the Cundinamarca department of Colombia located in the Andes. It belongs to the Sumapaz Province. Pasca is situated on the Altiplano Cundiboyacense at a distance of 71 kilometres (44 mi) from the capital Bogotá. It borders Fusagasugá, Sibaté and Soacha in the north, Bogotá D.C. in the north and east, Arbeláez in the south and Fusagasugá in the west. The urban center is located at an altitude of 2,180 metres (7,150 ft) and the altitude ranges from 2,000 metres (6,600 ft) to 3,500 metres (11,500 ft).

The Sutagao are the Chibcha-speaking indigenous people from the region of Fusagasugá, Bogotá savanna, Cundinamarca, Colombia. Knowledge about the Sutagao has been provided by scholar Lucas Fernández de Piedrahita. 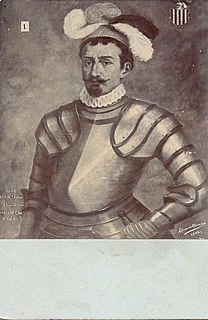 Zoratama, also spelled as Soratama, was a Muisca woman and the lover of Spanish conquistador Lázaro Fonte. Her story reminds of the North American indigenous Pocahontas who married John Rolfe after saving the life of John Smith.

Cachipay is a municipality and town of Colombia in the Tequendama Province, part of the department of Cundinamarca. Cachipay borders Quipile in the west, Zipacón in the east, Anolaima in the north and La Mesa in the south. The urban centre is located 53 kilometres (33 mi) east of Bogotá.

Choachí is a municipality and town of Colombia in the Eastern Province of the department of Cundinamarca. The municipality borders La Calera in the north, Ubaque in the south, in the east Fómeque and westward of Choachí is the Colombian capital Bogotá. The town centre is located at 38 kilometres (24 mi) from the centre of the capital. Within the boundaries of Choachí the Páramo de Cruz Verde is situated.

Pacho is a municipality and town of Colombia in the department of Cundinamarca. Pacho is part of the Rionegro Province and the urban centre is situated at a distance of 88 kilometres (55 mi) from the capital Bogotá at an altitude of 2,136 metres (7,008 ft), while the altitude ranges from 1,000 metres (3,300 ft) to 3,700 metres (12,100 ft). The municipality borders San Cayetano, Villagómez and Topaipí in the north, Supatá and Subachoque in the south, Vergara and El Peñón in the west and in the east Zipaquirá, Tausa and Cogua.

Zipacón is a municipality and town of Colombia in the Western Savanna Province, part of the department of Cundinamarca. The urban centre of Zipacón is situated at an altitude of 2,550 metres (8,370 ft) on the Bogotá savanna, the southern flatlands of the Altiplano Cundiboyacense in the Eastern Ranges of the Colombian Andes. Zipacón borders Anolaima, Facatativá, La Mesa and Bojacá.

El Rosal is a municipality and town of Colombia in the Western Savanna Province, part of the department of Cundinamarca. El Rosal is situated on the Bogotá savanna with its urban centre at an altitude of 2,685 metres (8,809 ft) and a distance of 20 kilometres (12 mi) from the capital Bogotá. It is part of the Metropolitan Area of Bogotá. El Rosal borders Subachoque in the northeast, San Francisco in the northwest, Madrid in the southeast and Facatativá in the southwest. 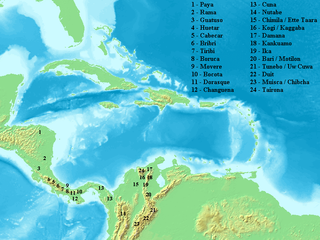 Michuá or Michica was the second zaque of Hunza, currently known as Tunja, as of 1470. His contemporary enemy zipa of the southern Muisca was Saguamanchica.

Hunzahúa was the first zaque; ruler of the northern Muisca with capital Hunza, named after him. His contemporary zipa of the southern Muisca was Meicuchuca. 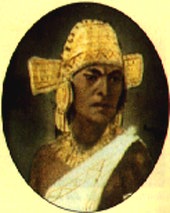 Saguamanchica was the second ruler (zipa) of Bacatá, currently known as the Colombian capital Bogotá, as of 1470. His zaque enemy ruling over the northern area of the Muisca territory was Michuá. 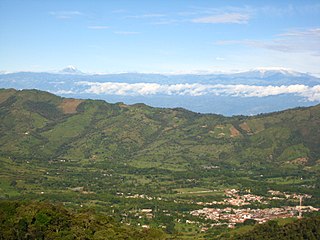 The Panche or Tolima were an indigenous group of people in what is now Colombia. Their language is unclassified – and possibly unclassifiable – but may have been Cariban. They inhabited the southwestern parts of the department of Cundinamarca and the northeastern areas of the department of Tolima, close to the Magdalena River. At the time of the Spanish conquest, more than 30,000 Panche were living in what would become the New Kingdom of Granada. Early knowledge about the Panche has been compiled by scholar Pedro Simón. According to the latter, the word panche in their own Panche language means "cruel" and "murderer".

The Battle of Pasca was fought between the southern Muisca Confederation, led by their zipa (ruler), Saguamanchica, and an alliance between the Panche and the Sutagao, led by the Cacique of Fusagasugá. The battle took place c. 1470 in the vicinity of Pasca, in modern-day Cundinamarca, Colombia, and resulted in a victory for Saguamanchica.

Juan (Francisco) de Céspedes Ruiz was a Spanish conquistador who is known as the founder of the town of Pasca, Cundinamarca, in the south of the Bogotá savanna, Colombia. De Céspedes arrived in the Americas in 1521 and participated in the conquest of the Tairona and the foundation of Santa Marta under Rodrigo de Bastidas. From 1542 to 1543 and in 1546 he served as mayor of Bogotá and after that until 1570 as lieutenant general of the first president of Colombia. Juan de Céspedes married Isabel Romero, one of the first Spanish women who arrived at Colombian territories and had two legitimate sons and one daughter. His date of death is uncertain; in late 1573 or 1576.

The Battle of Tocarema was a battle fought between an alliance of the troops of Spanish conquistador Gonzalo Jiménez de Quesada and zipa of the Muisca Sagipa of the southern Muisca Confederation and the indigenous Panche. The battle took place on the afternoon of August 19 and the morning of August 20, 1538 in the vereda Tocarema of Cachipay, Cundinamarca, Colombia and resulted in a victory for the Spanish and Muisca, when captains Juan de Céspedes and Juan de Sanct Martín commanded two flanks of the conquistadors.