Last updated August 16, 2020
‹ The template Infobox settlement is being considered for merging. ›
Place in Béjaïa, Algeria

Tibane is a town in northern Algeria.

The Molucca Sea is located in the western Pacific Ocean, around the vicinity of Indonesia, specifically bordered by the Indonesian Islands of Celebes (Sulawesi) to the west, Halmahera to the east, and the Sula Islands to the south. The Molucca Sea has a total surface area of 77,000 square miles. The Molucca Sea is rich in coral and has many diving sites due to the deepness of its waters. The deepness of the water explains the reasoning behind dividing the sea into three zones, which functions to transport water from the Pacific Ocean to the shallower seas surrounding it. The deepest hollow in the Molucca Sea is the 15,780-foot (4,810-meter) Batjan basin. This region is known for its periodic experiences of earthquakes, which stems from the sea itself being a micro plate, in which the Molucca Sea is being subducted in two opposite directions: one in the direction of the Eurasian Plate to the west and the other in the direction of the Philippines Sea Plate to the east.

The Lachen River is a tributary of the Teesta River in the state of Sikkim, India. It is one of the two main tributaries of the Teesta along with the Lachung River, which rise on opposite sides of the Donga Range in neighbouring Bhutan and converge in Chungthang in the North Sikkim district.

Endau is a small town in Mersing District, Johor, Malaysia. It lies on the northern tip of east Johor, on the border with Pahang.

Chemini is a town in northern Algeria, in the province of Béjaïa.

Semaoune is a town in northern Algeria.

Pieńczykówek is a village in the administrative district of Gmina Rajgród, within Grajewo County, Podlaskie Voivodeship, in north-eastern Poland. It lies approximately 11 kilometres (7 mi) south-west of Rajgród, 11 km (7 mi) east of Grajewo, and 70 km (43 mi) north-west of the regional capital Białystok.

Nagaré is a town in the Bogandé Department of Gnagna Province in eastern Burkina Faso. The town has a population of 4,565.

Çökəkoba is a village in the Zaqatala Rayon of Azerbaijan. The village forms part of the municipality of Göyəm.

Łosieniec is a village in the administrative district of Gmina Sieradz, within Sieradz County, Łódź Voivodeship, in central Poland. It lies approximately 8 kilometres (5 mi) west of Sieradz and 60 km (37 mi) west of the regional capital Łódź.

Böyük Xınıslı is a village and municipality in the Shamakhi Rayon of Azerbaijan. It has a population of 448.

Wydrowice is a village in the administrative district of Gmina Niemodlin, within Opole County, Opole Voivodeship, in south-western Poland. It lies approximately 4 kilometres (2 mi) south-east of Niemodlin and 21 km (13 mi) west of the regional capital Opole.

Wola Kamieńska is a village in the administrative district of Gmina Iława, within Iława County, Warmian-Masurian Voivodeship, in northern Poland. It lies approximately 7 kilometres (4 mi) north-east of Iława and 61 km (38 mi) west of the regional capital Olsztyn.

Bałdzki Piec is a village in the administrative district of Gmina Purda, within Olsztyn County, Warmian-Masurian Voivodeship, in northern Poland. It lies approximately 12 kilometres (7 mi) south of Purda and 21 km (13 mi) south-east of the regional capital Olsztyn.

Kause is a village in Lääneranna Parish, Pärnu County, in western Estonia. 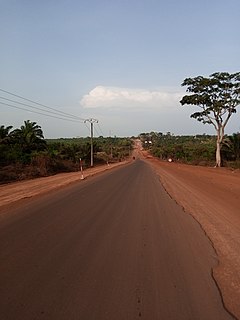 Takon is an arrondissement in the Plateau department of Benin. It is an administrative division under the jurisdiction of the commune of Sakété. According to the population census conducted by the Institut National de la Statistique Benin on February 15, 2002, the arrondissement had a total population of 10,424.

Gul Bandai is an administrative unit, known as Union council of Buner District in the Khyber Pakhtunkhwa province of Pakistan.

Agafonovo is the name of several rural localities in Russia: