The Tibbetts Point Lighthouse is located in Cape Vincent (town), New York. The land upon which the lighthouse stands is a part of a 600-acre (240 ha) grant of land to Captain John Tibbetts of Troy, New York. [2] The lighthouse is a circular tower that stands 69 feet (21 m) above the water

The current lighthouse was constructed in 1854.

The Tibbetts Point Lighthouse is on the Great Lakes Seaway Trail.

Its Fresnel lens is still used. Only 70 such lenses are still operational in the United States, 16 being on the Great Lakes of which two are in New York. [3]

Tibbetts Point Light is listed on the National Register of Historic Places.

The Archives Center at the Smithsonian National Museum of American History has a collection (#1055) of souvenir postcards of lighthouses and has digitized 272 of these and made them available online. These include postcards of Tibbetts Point Light [4] with links to customized nautical charts provided by National Oceanographic and Atmospheric Administration.

The Fire Island Lighthouse is a visible landmark on the Great South Bay, in southern Suffolk County, New York on the western end of Fire Island, a barrier island off the southern coast of Long Island. The lighthouse is located within Fire Island National Seashore and just to the east of Robert Moses State Park. It is part of the Fire Island Light Station which contains the light, keepers quarters, the lens building containing the original first-order Fresnel lens, and a boat house.

The Ludington Light is a 57-foot (17 m) tall steel-plated lighthouse in Ludington, Michigan, which lies along the eastern shores of Lake Michigan, at the end of the breakwater on the Pere Marquette Harbor. Given its location on the northern breakwater where the Pere Marquette River meets Lake Michigan, it is sometimes known as the Ludington North Breakwater Light. Underlying the building itself is a prow-like structure, which is designed to break waves.

The Toledo Harbor Lighthouse is a lighthouse in Lake Erie near Toledo, Ohio, in the United States. The light replaced the 1837 lighthouse on Turtle Island at the mouth of the Maumee River. It is an active aid to navigation.

The Vermilion Lighthouse is a lighthouse on the shores of Lake Erie in Vermilion, Ohio, USA. It is situated on the grounds of the Inland Seas Maritime Museum near the mouth of the Vermilion River. Erected on 23 October 1991 and dedicated on 6 June 1992, the lighthouse is illuminated by a 200 watt incandescent light bulb with a 5th order Fresnel lens. The lighthouse's United States Coast Guard-mandated light color is steady red. 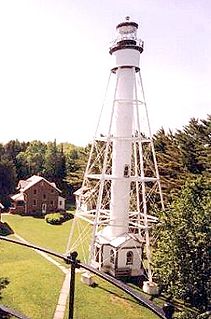 Forty Mile Point Light is a lighthouse in Presque Isle County near Hammond Bay on the western shore of Lake Huron in Rogers Township, Michigan USA.

Braddock Point Light was a lighthouse just west of Braddock Bay at Bogus Point on Lake Ontario in New York. 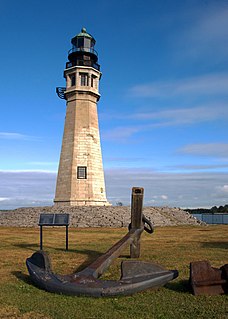 Buffalo (Main) Light is a lighthouse at the mouth of Buffalo River/Erie Canal, directly across from the Erie Basin Marina in Buffalo, New York. 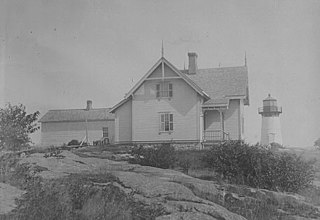 Crossover Island Light is a lighthouse on the Saint Lawrence River in New York state near the Canada–United States border. 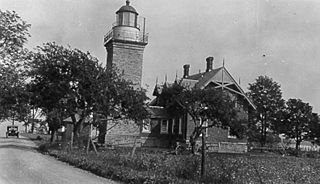 Fort Niagara Light is an inactive lighthouse on the Niagara River on the south shore of Lake Ontario in New York state. It is located on the grounds of Fort Niagara. 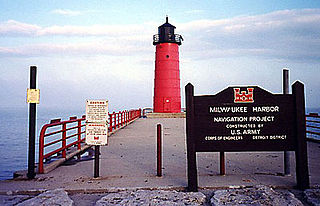 The Milwaukee Pierhead Light is an active lighthouse located in the Milwaukee harbor, just south of downtown. This aid to navigation is a 'sister' of the Kenosha North Pier Light.

Ashtabula Harbor Light is a lighthouse in Ashtabula, Ohio. It was listed in the National Register on August 8, 1983.

Tawas Point Light is located in the Tawas Point State Park off Tawas Bay in Lake Huron in Baldwin Township in Northern Michigan.

Port Sanilac Light is a United States Coast Guard lighthouse located on Point Sanilac, near Port Sanilac on the eastern side of Michigan's Thumb. It is an automated and active aid to navigation on Lake Huron. 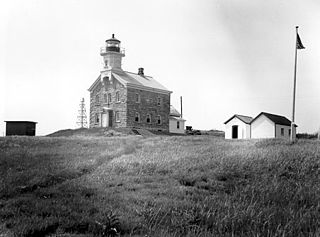 Plum Island Light is located on the western end of Plum Island, which lies east of Orient Point which in turn is at the end of the North Fork of Long Island in the US state of New York. An historic granite lighthouse originally built in 1869 sits at the site, but no longer serves as an active aid to navigation. It was listed on the National Register of Historic Places in 2011. A short distance northwest of the granite lighthouse building is a 14 feet (4.3 m) metal tower that holds the automated light that has served as an aid to navigation since the earlier light was decommissioned in 1978.

The Charlotte–Genesee Lighthouse is an 1822 stone octagonal lighthouse in the Charlotte neighborhood in northern Rochester, New York, United States. The 40 ft (12 m) tower is located on Lake Ontario at the mouth of the Genesee River. It originally had 10 whale oil Argand lamps, which were replaced with a Fresnel lens in 1853.

Thirty Mile Point Light is a lighthouse on the south shore of Lake Ontario in Niagara County, New York. It is part of Golden Hill State Park, a New York state park. The lighthouse is open to the public. It gets its name because it is the point 30 miles east of the Niagara River. The lighthouse was built in 1875 of hand-carved stone. The old tower is being restored.

Buffalo North Breakwater South End Light is a lighthouse formerly located at the entrance to Buffalo Harbor, Buffalo, New York. It is one of two "bottle shaped" beacons located in Buffalo Harbor; the other is the South Buffalo North Side Light. It is a 29-foot (8.8 m) high beacon constructed of boiler plate. It measures 10 feet 3⁄4 inch (3.067 m) at the bottom and 2 feet 3 inches (0.69 m) at the top. It is distinguished by four cast iron port windows and a curved iron door. It was first lit on September 1, 1903, and originally equipped with a 6th-order Fresnel lens. A battery operated 12 volt lamp with a 12 inches (300 mm) green plastic lens was installed in the beacon c. 1960, when a domed roof formerly mounted over the lens was removed. The beacon was removed in 1985, and now stands on the grounds of the Buffalo (main) Light. Its twin is located at the Dunkirk Lighthouse and Veterans Park Museum.