Tiberianus was a 2nd-century Roman politician.

The Byzantine chronicler Johannes Malalas (ed. Dindorf, p. 273) speaks of him as 10th legate of the first province of Palestine (ἡγεμὼν τοῦ πρώτου Παλαιστίνων ἔθνους), in connection with the sojourn of Hadrian in Antioch (114–117). A similar notice may be found in Johannes Antiochenus (In Müller, "Fragmenta Historicorum Græcorum," iv. 580, No. 111) and in Suda, s.v. Τραϊανός. The designation "Palestina prima," which came into use in the middle of the fourth century, gives a historical character to this notice. These authors use a later designation for the earlier period. 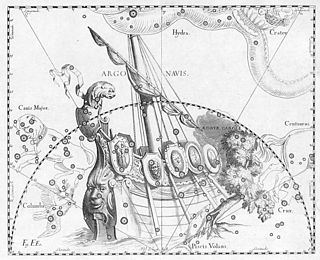 A Bayer designation is a stellar designation in which a specific star is identified by a Greek or Latin letter followed by the genitive form of its parent constellation's Latin name. The original list of Bayer designations contained 1,564 stars. The brighter stars were assigned their first systematic names by the German astronomer Johann Bayer in 1603, in his star atlas Uranometria. Bayer catalogued only a few stars too far south to be seen from Germany, but later astronomers supplemented Bayer's catalog with entries for southern constellations.

Common Era (CE) is one of the year notations used for the Gregorian calendar, the world's most widely used calendar era. Before the Common Era (BCE) is the era before CE. BCE and CE are alternatives to the Dionysian BC and AD notations, respectively. The Dionysian era distinguishes eras using the notations BC and AD. The two notation systems are numerically equivalent: "2022 CE" and "AD 2022" each describe the current year; "400 BCE" and "400 BC" are each the same year. The Gregorian calendar is used throughout the world today, and is an international standard for civil calendars. 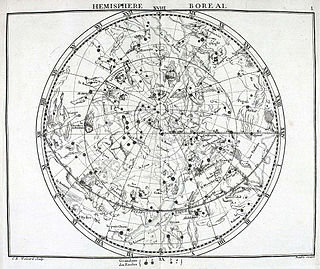 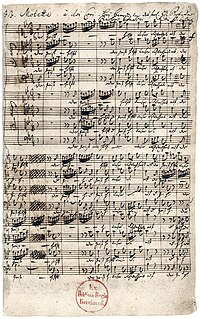 In Western classical music, a motet is mainly a vocal musical composition, of highly diverse form and style, from the high medieval music to the present. The motet was one of the pre-eminent polyphonic forms of Renaissance music. According to Margaret Bent, "a piece of music in several parts with words" is as precise a definition of the motet as will serve from the 13th to the late 16th century and beyond. The late 13th-century theorist Johannes de Grocheo believed that the motet was "not to be celebrated in the presence of common people, because they do not notice its subtlety, nor are they delighted in hearing it, but in the presence of the educated and of those who are seeking out subtleties in the arts".

A physicist is a scientist who specializes in the field of physics, which encompasses the interactions of matter and energy at all length and time scales in the physical universe. Physicists generally are interested in the root or ultimate causes of phenomena, and usually frame their understanding in mathematical terms. Physicists work across a wide range of research fields, spanning all length scales: from sub-atomic and particle physics, through biological physics, to cosmological length scales encompassing the universe as a whole. The field generally includes two types of physicists: experimental physicists who specialize in the observation of natural phenomena and the analysis of experiments, and theoretical physicists who specialize in mathematical modeling of physical systems to rationalize, explain and predict natural phenomena. Physicists can apply their knowledge towards solving practical problems or to developing new technologies.

In astronomy, stars have a variety of different stellar designations and names, including catalogue designations, current and historical proper names, and foreign language names.

In astronomy, a variable star designation is a unique identifier given to variable stars. It uses a variation on the Bayer designation format, with an identifying label preceding the Latin genitive of the name of the constellation in which the star lies. See List of constellations for a list of constellations and the genitive forms of their names. The identifying label can be one or two Latin letters or a V plus a number. Examples are R Coronae Borealis, YZ Ceti, V603 Aquilae. 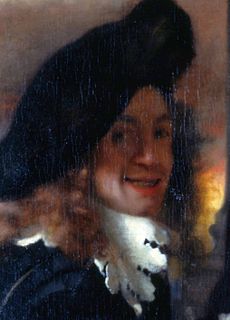 Johannes Vermeer was a Dutch Baroque Period painter who specialized in domestic interior scenes of middle-class life. During his lifetime, he was a moderately successful provincial genre painter, recognized in Delft and The Hague. Nonetheless, he produced relatively few paintings and evidently was not wealthy, leaving his wife and children in debt at his death.

The Syriac language, also known as Syriac Aramaic and Classical Syriac, is an Aramaic dialect that emerged during the first century AD from a local Aramaic dialect that was spoken in the ancient region of Osroene, centered in the city of Edessa. During the Early Christian period, it became the main literary language of various Aramaic-speaking Christian communities in the historical region of Ancient Syria and throughout the Near East. As a liturgical language of Syriac Christianity, it gained a prominent role among Eastern Christian communities that used both Eastern Syriac and Western Syriac rites. Following the spread of Syriac Christianity, it also became a liturgical language of eastern Christian communities as far as India and China. It flourished from the 4th to the 8th century, and continued to have an important role during the next centuries, but by the end of the Middle Ages it was gradually reduced to liturgical use, since the role of vernacular language among its native speakers was overtaken by several emerging Neo-Aramaic dialects. 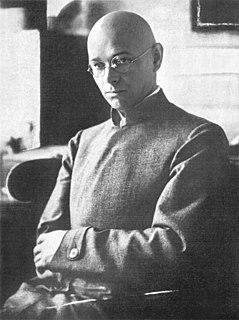 Johannes Itten was a Swiss expressionist painter, designer, teacher, writer and theorist associated with the Bauhaus school. Together with German-American painter Lyonel Feininger and German sculptor Gerhard Marcks, under the direction of German architect Walter Gropius, Itten was part of the core of the Weimar Bauhaus.

Bellatrix, with Bayer designation γ Orionis, is the third-brightest star in the constellation of Orion, positioned 5° west of the red supergiant Betelgeuse. With a slightly variable magnitude of around 1.6, it is about the 25th-brightest star in the night sky. Located 250 ± 10 light-years away from Earth, it is a blue giant star around 7.7 times as massive as the sun, with 5.75 times its diameter.

The First Viennese School is a name mostly used to refer to three composers of the Classical period in Western art music in late-18th-century to early-19th-century Vienna: Joseph Haydn, Wolfgang Amadeus Mozart and Ludwig van Beethoven. Sometimes, Franz Schubert is added to the list.

Anonymous IV is the designation given to the writer of an important treatise of medieval music theory. He was probably an English student working at Notre Dame de Paris, most likely in the 1270s or 1280s. Nothing is known about his life, not even his name. His writings survive in two partial copies from Bury St Edmunds; one from the 13th century, and one from the 14th.

The sound recording copyright symbol or phonogram symbol, represented by the graphic symbol ℗, is the copyright symbol used to provide notice of copyright in a sound recording (phonogram) embodied in a phonorecord. It was first introduced in the Rome Convention for the Protection of Performers, Producers of Phonograms and Broadcasting Organisations. The United States added it to its copyright law as part of its adherence to the Geneva Phonograms Convention. Its use is currently set out in 17 U.S.C. § 402, the codification of the Copyright Act of 1976. 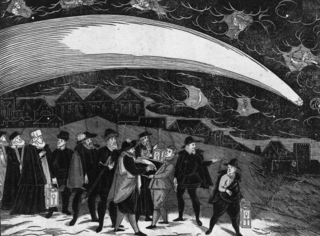 The Great Comet of 1577 is a non-periodic comet that passed close to Earth during the year 1577 AD. Having an official designation beginning with "C" classes it as a non-periodic comet, and so it is not expected to return. In 1577, the comet was visible to all of Europe, and was recorded by many contemporaries of the time, including the famous Danish astronomer Tycho Brahe and Turkish astronomer Taqi ad-Din. From his observations of the comet, Brahe was able to discover that comets and similar objects travel above the Earth's atmosphere. The best fit using JPL Horizons suggests that the comet is currently about 320 AU from the Sun.

CK Vulpeculae is an object whose exact nature is unknown. It was once considered to be the oldest reliably-documented nova. It consists of a compact central object surrounded by a bipolar nebula.