Tiberias Municipal Stadium (Hebrew : האצטדיון העירוני של טבריה, HaItztadion HaIroni Shel Tverya), is a football stadium currently being built in Tiberias for Ironi Tiberias F.C., the football team of the town, and will replace the old stadium located downtown. Once completed, the new stadium will include 7,554 seats. It is located at the southern entrance to the city, near the junction of Poriya Hospital as a part of a sports complex also including a multi-purpose 2,500-seat sports hall, a training field and a swimming pool. As of late 2020, the project was frozen due to lack of funds.

The Haifa Municipal Stadium, more commonly known as Kiryat Eliezer, was a multi-use stadium in the Kiryat Eliezer neighborhood of Haifa, Israel. It was mostly used for football matches and as the home stadium of Maccabi Haifa and Hapoel Haifa. It was replaced by the new Sammy Ofer Stadium at the southern entrance to the city in 2014. 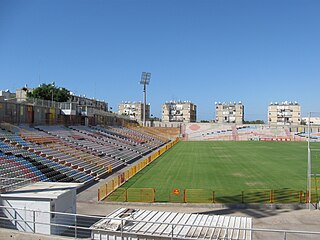 The Yud-Alef Stadium is a football stadium in Ashdod, Israel, that was built for local football sides Maccabi Ashdod, Beitar Ashdod and Hapoel Ashdod.

Maccabi Ironi Ashdod F.C., commonly known as Ironi Ashdod, is an Israeli football club based in Ashdod city. In 1999, the club was forced to merge with local rivals Hapoel Ashdod to create F.C. Ashdod. Ironi Tiberias is a football club from Tiberias, Israel. The club is not connected to Hapoel Tiberias, a former club which spent several seasons in the top division of Israeli football in the 1960s and the 1980s, making its last appearance in the top flight in 1989. 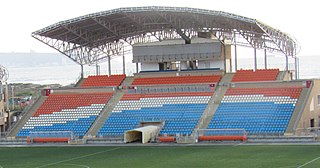 Acre Municipal Stadium, also Toto Acre Stadium, is a soccer stadium in Acre, Israel. It is the home ground of Hapoel Acre which plays in Liga Leumit, the second tier of the Israeli football league system. The stadium is located at the southern entrance of town, near the Ein HaMifratz intersection.

Grundman Stadium is a football stadium in Tel Aviv District city of Ramat HaSharon, Israel. It is the home stadium of Ironi Nir Ramat HaSharon. The stadium holds 4,300 and was built in 1998 and been renovated in 2012.

Ironi Nesher is an Israeli football club based in Nesher. They are currently in Liga Alef and play home matches at the Nesher Stadium.

Lod Municipal Stadium is a football stadium in Neot Itzhak neighborhood of Lod, Israel. It is currently the home stadium of Hapoel Bnei Lod.

Tiberias Municipal Stadium, is a football stadium in Tiberias.

Ramla Municipal Stadium, officially known as Toto Stadium Ramla, is a football stadium in Ramla, Israel. It is currently the home stadium of Beitar Tel Aviv Ramla and of the U-19 team of Maccabi Tel Aviv.

The 2020–21 Liga Alef season is the 12th season as third tier since its re-alignment in 2009 and the 54th season of third-tier football in Israel.

The 2020–21 Liga Bet season is the 65th season of fourth-tier football in Israel.