Tiberiopolis (Ancient Greek : Τιβεριούπολις; sometimes in sources, Tiberiapolis, and Pappa-Tiberiopolis; formerly Pappa) [1] [2] was a town in the Roman province of Phrygia Pacatiana, mentioned by Ptolemy, [3] Socrates of Constantinople [4] and Hierocles. [5] At various times, it was considered as part of Phrygia, Isauria, and the late Roman province of Pisidia. [6]

It struck its own coins at least from the time of Trajan.

It was situated at the modern village of Yunuslar, Beyşehir district, in Konya Province, Turkey. [2] At Tiberiopolis the famous Roman sarcophagus showing the Twelve Labours of Hercules now displayed at the Konya Archaeological Museum was recovered. [2]

It must have been Christianised at an early date. Nicephorus, a presbyter at Tiberiopolis was martyred in 361 or 362, and later canonized. [7] His feast is celebrated on 28 November. [7]

The bishopric of Tiberiopolis appears in the oldest Greek Notitiae episcopatuum among the suffragans of Laodicea in Phrygia, capital and metropolitan see of the late Roman province of Phrygia Pacatiana, but in the 8th century it was attached to Hierapolis in Phrygia, capital and metropolitan see of Phrygia Pacatiana Secunda, and as such appears in the Notitiae episcopatuum of the Ecumenical Patriarchate of Constantinople until the 13th century, when the area was overrun by the Seljuk Turks.

Le Quien [8] mentions five of its bishops known by their presence at councils:

Tiberiopolis remains a titular see in the Roman Catholic Church. [9] Titular bishops have been: [9]

Under the name of Pappa, the town was also a bishopric of the province of Pisidia, and later a titular see of the Roman Catholic Church. [10]

Acmonia or Akmonia is an ancient city of Phrygia Pacatiana, in Asia Minor, now known as Ahat Köyü. It is mentioned by Cicero and was a point on the road between Dorylaeum and Philadelphia. Under the Romans, it was within the conventus iuridicus of Apamea.

Palaeopolis was a city in ancient Lydia that was included in the late Roman province of Asia Prima. Its bishopric was thus a suffragan of Ephesus, the metropolitan see of that province.

Parlais is a former Roman city of Pisidia.

Harpasa was a city and bishopric in ancient Caria in Roman Asia Minor, which only remains a Latin Catholic titular see.

Cotenna or Kotenna was a city in the Roman province of Pamphylia I in Asia Minor. It corresponds to modern Gödene, near Konya, Turkey.

Cidyessus or Kidyessos was a city of some importance, west of Ammonia in west-central ancient Phrygia, in the territory of the Setchanli Ova, or Mouse Plain; this large and fertile valley projects far into Phrygia Salutaris, but the city was in Phrygia Pacatiana.

Trapezopolis or Trapezoupolis (Τραπεζούπολις) was a city of ancient Caria, and later in the late Roman province of Phrygia Pacatiana Prima.

Dalisandus or Dalisandos was an ancient city and bishopric in eastern Pamphylia, in Asia Minor and remains a Latin titular see. 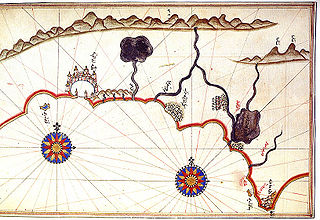 Etenna was a city in the late Roman province of Pamphylia Prima. Centuries earlier, it was reckoned as belonging to Pisidia, as by Polybius, who wrote that in 218 BC the people of Etenna "who live in the highlands of Pisidia above Side" provided 8000 hoplites to assist the Seleucid usurper Achaeus.

Coela was a Roman city and bishopric in the province of Europa and is now a Latin Catholic titular see.

Agathonice or Agathonicea was a town and bishopric in Thrace during the Middle Ages. It remains a titular see of the Ecumenical Patriarchate of Constantinople, of the Bulgarian Orthodox Church, and of the Roman Catholic Church. 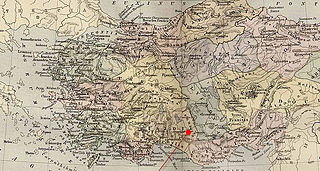 Isauropolis was a Roman and Byzantine-era town in southern Turkey.

The Stauropolis is the former metropolitan see of Caria in Asia Minor within the Patriarchate of Constantinople. It remains a titular see of the Roman Catholic Church.

Metropolis was an ancient town in the southern part of Phrygia, belonging to the conventus of Apamea. That this town is different from the more northerly town of the name in northern Phrygia, is quite evident, even independently of the fact that Stephanus of Byzantium mentions two towns of the name of Metropolis in Phrygia, and that Hierocles. and the Notitiae speak of a town of this name in two different provinces of Phrygia. In Roman times, it was assigned to the province of Pisidia, where it became a bishopric. No longer a residential see, it remains, under the name Metropolis in Pisidia, a titular see of the Roman Catholic Church.