Tiberiu Popoviciu High School of Computer Science from Cluj-Napoca, Romania (Romanian : Liceul de Informatică „Tiberiu Popoviciu”) is a Romanian high school founded in 1971, together with three other similar high schools in Bucharest, Iaşi and Timișoara. [1] From 1993 it holds the name of mathematician Tiberiu Popoviciu (1906–1975), known for establishing the academic field of computer science in Romania.

Ovidius University of Constanța is a public higher education institution in Constanța, Romania founded in 1961 as a Pedagogical Institute and transformed into a comprehensive university in 1990. As the Charter of the university states, the Pedagogical Institute was founded by Order of the Ministry of Education no. 654 of 1961, comprising four faculties. By State Council Decree no. 209 of 1977 the institute became a Higher Education Institute and reorganized. By Government Decision 209 of 1990 the institute became a university and, a year later, by Order of the Ministry of Education and Science no. 4894 of 1991, the university was given the present name.

Băneasa Forest is a wood in the north of Bucharest, Romania. Covering 80,000 hectares, the ground is located in proximity to Băneasa neighborhood and Băneasa Airport. On its southern edge, there is the Zoo Băneasa zoological garden.

The Bacalaureat is an exam held in Romania and Moldova when one graduates high school.

Gheorghe Șincai National College is a public day high school for grades 9 to 12 in Baia Mare, Romania, attended by some 900 pupils aged 14 to 19. Grades 5 to 8 opened in 2010. The school is named after historian, philologist and educator Gheorghe Şincai. It is one of three high schools in Baia Mare designated a "National College", the most prestigious rank for institutions of secondary education in Romania. It also ranks high on the national level in results at the Romanian Baccalaureate, university admissions and school contests. Over 17,000 have graduated from Șincai, with the majority going on to university.

Grigore Moisil National College of Computer Science is a high school in Brașov, Romania, that carries the name of academician Grigore Moisil, the "founder" of Romanian computer sciences.

In convex analysis, Popoviciu's inequality is an inequality about convex functions. It is similar to Jensen's inequality and was found in 1965 by Tiberiu Popoviciu, a Romanian mathematician.

The Tudor Vianu National High School of Computer Science, often referred to as "CNITV" of Bucharest can trace its roots back to 1928 and enjoys nowadays a very good reputation in Romania and even in the world, due to its students that won many International Competitions in physics, mathematics, computer science and chemistry. 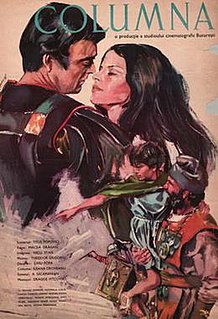 The Column is a 1968 Romanian historical film directed by Mircea Drăgan. The film was selected as the Romanian entry for the Best Foreign Language Film at the 41st Academy Awards, but was not accepted as a nominee.

Tiberiu is a Romanian-language masculine given name that may refer to:

Hajongard cemetery, on Avram Iancu Street, is one of the oldest cemeteries in Cluj-Napoca, Romania, founded in the sixteenth century. It is one of the most picturesque sights of the city. It covers an area of approximately 14 hectares.

This article describes the history of computing in Romania.

Elena Moldovan Popoviciu was a Romanian mathematician known for her work in functional analysis and specializing in generalizations of the concept of a convex function. She was a winner of the Simion Stoilow Prize in mathematics.