Last updated September 26, 2022
This article is about the co-emperor of the 7th century. For the first century Emperor, see Tiberius.
Byzantine co-Emperor

Tiberius (Medieval Greek : Τιβέριος, romanized: Tiberios) was Byzantine co-emperor from 659 to 681. He was the son of Constans II and Fausta, who was elevated in 659, before his father departed for Italy. After the death of Constans, Tiberius' brother Constantine IV, ascended the throne as senior emperor. Constantine attempted to have both Tiberius and Heraclius removed as co-emperors, which sparked a popular revolt, in 681. Constantine ended the revolt by promising to accede to the demands of the rebels, sending them home, but bringing their leaders into Constantinople. Once there, Constantine had them executed, then imprisoned Tiberius and Heraclius and had them mutilated, after which point they disappear from history.

Tiberius was the youngest son of Constans II. His mother was Fausta, daughter of the Patrician Valentinus. [1] Although his eldest brother Constantine IV had been raised to the rank of co-emperor in 654, [2] in 659, shortly before his father's departure for Italy, Tiberius was also elevated by Constans to the rank of co-emperor, alongside his older brother Heraclius. The coronation ceremony took place between 27 April and 9 August. Given that most coronations took place in festive days, it's very likely that this one took place on Whitsunday (2 June). [3] In 663, Constans tried to have his sons join him in Sicily, but this provoked a popular uprising in Constantinople, [4] led by Theodore of Koloneia and Andrew, [5] and the brothers remained in the imperial capital. [4]

With Constans II's death in 668, Constantine IV became the senior emperor. [6] After ruling alongside Tiberius and Heraclius for thirteen years, Constantine attempted to demote his brothers from the imperial position, but this provoked a military revolt in the Anatolic Theme (in modern Turkey). [7] The army marched to Chrysopolis, and sent a delegation across the straits of the Hellespont to Constantinople, demanding that the two brothers should remain co-emperors alongside Constantine IV. [7] They based their demand on the belief that, since Heaven was ruled by the Trinity, in the same way the empire should be governed by three Emperors. [6] Confronted by this situation, Constantine kept a close eye on his brothers, and sent across a trusted officer, Theodore, the captain of Koloneia. Constantine gave Theodore the delicate task of praising the soldiers for their devotion and agreeing with their reasoning, with the objective of persuading them to return to their barracks in Anatolia. [8] He also invited the leaders of the rebellion to come over to Constantinople and consult with the Senate in order that they may begin the process of confirming the army's wishes. [8] Happy with this apparently positive outcome, the army departed back to Anatolia, while the instigators of the movement entered the city. [8] With the military threat now gone, Constantine moved against the leaders of the revolt, captured them and had them hanged at Sycae. [9]

Because he was the focus of a plot to curtail Constantine's power, both he and his brother were now suspect in the senior emperor's eyes; also, the emperor was keen to raise up his own son, the future Justinian II. [10] Sometime between 16 September and 21 December 681, Constantine ordered the mutilation of his brothers by slitting their noses, and ordered that their images no longer appear on any coinage, and that their names be removed from all official documentation; [11] likely to ensure that his son, Justinian II would, succeed him. [10] After this point, neither are mentioned again by history. [12] 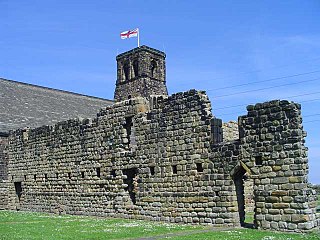 Year 681 (DCLXXXI) was a common year starting on Tuesday of the Julian calendar. The denomination 681 for this year has been used since the early medieval period, when the Anno Domini calendar era became the prevalent method in Europe for naming years.

Heraclius, known by the diminutive Heraclonas or Heracleonas, and sometimes called Heraclius II, was the son of Heraclius and his niece Martina. His father had stipulated in his will that both of his sons, Heraclonas and Constantine III, should rule jointly upon his death. Heraclius also specified that his wife, Martina, was to be called "Mother and Empress" insofar as she might have influence at court as well. The emperor Heraclius died in February 641 from edema. When Martina made the late Emperor's will public she faced staunch resistance to her playing any active role in government, but both Heraclonas and Constantine were proclaimed joint-emperors in February 641 without incident. After Constantine died of tuberculosis in May 641, Heraclonas became sole emperor, under the regency of his mother due to his young age. He reigned until October or November 641, when he was overthrown by Valentinus, a general and usurper of Armenian extract, who installed Constans II, the son of Constantine III. Valentinus had Heraclonas' nose cut off, then exiled him to Rhodes, where he is believed to have died in the following year.

Constans II, nicknamed "the Bearded", was the Eastern Roman emperor from 641 to 668. Constans was the last attested emperor to serve as consul, in 642, although the office continued to exist until the reign of Leo VI the Wise. 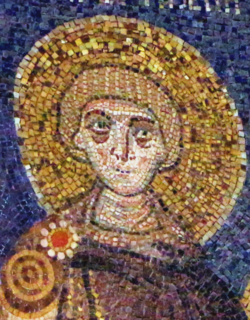 Constantine IV, called the Younger and sometimes incorrectly Pogonatos out of confusion with his father, was Eastern Roman Emperor from 668 to 685. His reign saw the first serious check to nearly 50 years of uninterrupted Islamic expansion, while his calling of the Sixth Ecumenical Council saw the end of the monothelitism controversy in the Byzantine Empire; for this, he is venerated as a saint in the Eastern Orthodox Church, with his feast day on September 3. He successfully defended Constantinople from the Arabs. 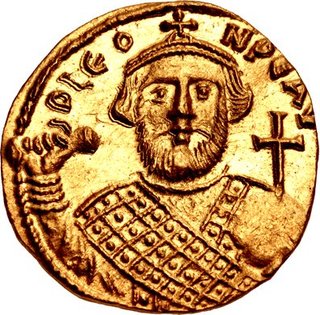 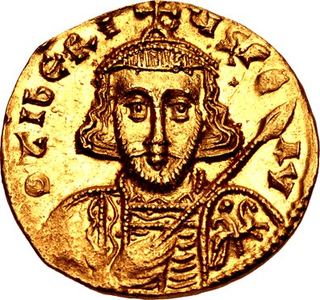 Sermon was an early 11th-century voivode (duke) of Syrmia and a local governor in the First Bulgarian Empire, vassal of Bulgarian emperor Samuil. His residence was in Sirmium. He was described in Byzantine sources as: "ruler of Syrmia and brother of Nestongos". 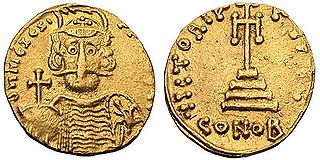 Mizizios or Mezezius was an Armenian noble who served as a general of Byzantium, later usurping the Byzantine throne in Sicily from 668 to 669.

Constantine Lips was a Byzantine aristocrat and admiral who lived in the later 9th and early 10th centuries. He was killed in 917 at the Battle of Acheloos against Bulgaria. Constantine Lips is most notable for his foundation of the convent bearing his name at Constantinople.

Fausta was the Byzantine empress as the wife of Constans II.

Gregory the Patrician was a Byzantine Exarch of Africa. A relative of the ruling Heraclian dynasty, Gregory was fiercely pro-Chalcedonian and led a rebellion in 646 against Emperor Constans II over the latter's support for Monothelism. Soon after declaring himself emperor, he faced an Arab invasion in 647. He confronted the invaders but was decisively defeated and killed at Sufetula. Africa returned to imperial allegiance after his death and the Arabs' withdrawal, but the foundations of Byzantine rule there had been fatally undermined.

Valentinus was a Byzantine general and usurper. 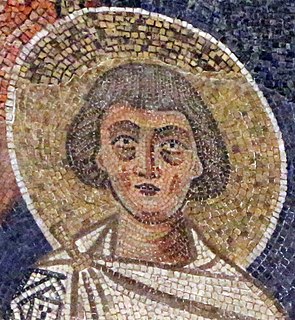 Gennadius, sometimes referred to as Gennadius II, was a Byzantine general who exercised the role of Exarch of Africa from 648 to 665. In 664 Gennadius rebelled against Emperor Constans II and was himself overthrown the next year by a loyalist uprising. 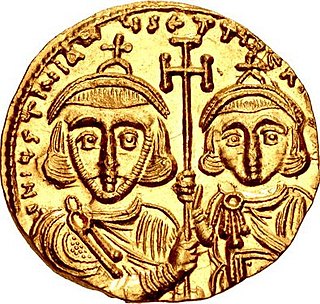 Tiberius, sometimes enumerated as Tiberius IV, was the son of Emperor Justinian II and Theodora of Khazaria. He served as co-emperor of the Byzantine Empire with his father Justinian II, from 706 to 711. Both were killed in 711, when Bardanes led a rebellion which marched on Constantinople. After Tiberius' death, two different individuals impersonated him, with one, named Bashir, going on to be hosted by Hisham ibn Abd al-Malik, the Umayyad caliph, before his lie was discovered and he was crucified.

Saint Antony the Younger was a Byzantine military officer who became a monk and saint. He is commemorated by the Eastern Orthodox Church on 1 December.

Heraclius was born between 667 and 685, and was the son, and second of two children, of Byzantine Emperor Constantine IV and his wife, Empress Anastasia.

Martinus or Marinus was caesar of the Byzantine Empire from c. 638–September/October 641. Martinus was the son of Emperor Heraclius and Empress Martina. Under Heraclius, Martinus was elevated to caesar in c. 638. Heraclius left the Byzantine Empire to two of Martinus' brothers, Constantine III and Heraclonas; Constantine soon died of tuberculosis, though some of his partisans alleged that he was poisoned by Martina. One such partisan, Valentinus, led troops to Chalcedon to force Martina to make Constans II, the son of Constantine, co-emperor. Valentinus seized Constantinople regardless in September/October 641, and deposed Martina, Heraclonas, and Martinus, and cut off Martinus' nose and emasculated him, before exiling him to Rhodes.

David, was one of three co-emperors of Byzantium for a few months in late 641, and had the regnal name Tiberius. David was the son of Emperor Heraclius and his wife and niece Empress Martina. He was born after the emperor and empress had visited Jerusalem and his given name reflects a deliberate attempt to link the imperial family with the Biblical David. The David Plates, which depict the life of King David, may likewise have been created for the young prince or to commemorate his birth. David was given the senior court title caesar in 638, in a ceremony during which he received the kamelaukion cap previously worn by his older brother Heraclonas.