Claudius was the son of an earlier Tiberius Claudius Cleobulus (c.135-c.180) and wife Acilia, the daughter of Manius Acilius Glabrio Gnaeus Cornelius Severus and wife ... Faustina. He married his first cousin, Acilia Frestana, who was the daughter of Manius Acilius Glabrio, consul in 186, and paternal niece of Acilia. Tiberius Claudius Cleobulus and his wife Acilia Frestana together had Claudia Acilia Priscilliana, who would later marry Lucius Valerius Messalla. [2] [3] He also had a son, Claudius Acilius Cleobulus.

AD 91 (XCI) was a common year starting on Saturday of the Julian calendar. At the time, it was known as the Year of the Consulship of Glabrio and Traianus. The denomination AD 91 for this year has been used since the early medieval period, when the Anno Domini calendar era became the prevalent method in Europe for naming years.

Year 191 BC was a year of the pre-Julian Roman calendar. At the time it was known as the Year of the Consulship of Nasica and Glabrio. The denomination 191 BC for this year has been used since the early medieval period, when the Anno Domini calendar era became the prevalent method in Europe for naming years.

The gens Acilia was a plebeian family at ancient Rome, that flourished from the middle of the third century BC until at least the fifth century AD, a period of seven hundred years. The first of the gens to achieve prominence was Gaius Acilius, who was quaestor in 203 and tribune of the plebs in 197 BC.

Manius Acilius Glabrio was a Roman statesman and general, grandson of the jurist Publius Mucius Scaevola. 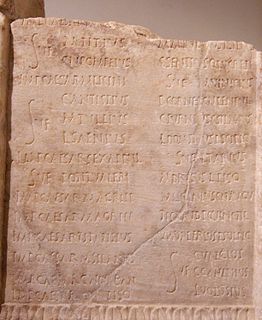 Manius Acilius Glabrio was a Roman general and consul of the Roman Republic in 191 BC. He came from an illustrious plebeian family (gens) whose members held magistracies throughout the Republic and into the Imperial era.

Manius Acilius Glabrio was a Roman Senator who served as consul ordinarius in AD 91 as the colleague of Trajan, afterwards emperor. Although one of many senators executed during the reign of Domitian on the alleged grounds of plotting against the emperor, he was remembered by his contemporaries best for his strength. Domitian summoned Glabrio during the latter's consulate to his Alban estate during the festival of the Juvenalia to kill a large lion; not only did Glabrio despatch the beast, but he escaped all injury. Following his defeat of the lion, Glabrio was banished by Domitian, then executed while in exile. 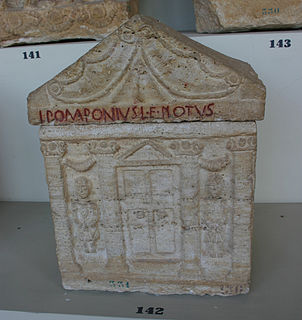 Anicius Acilius Glabrio Faustus was an aristocrat of the later Roman Empire. He was Urban prefect three times before 437, consul in 438, and briefly Praetorian prefect of Italy in 442. Faustus was selected to promulgate the Theodosian Code in the Western Empire.

Marcus Acilius Glabrio was a Roman senator who was appointed consul suffectus in 33 BC.

Manius Acilius Glabrio Gnaeus Cornelius Severus was a senator of the Roman Empire. He was consul ordinarius in 152 with Marcus Valerius Homullus as his colleague. Acilius Glabrio is known almost solely from surviving inscriptions.

Acilius Severus was a member of the Roman aristocracy of the fourth century AD. He is known to have been consul with Vettius Rufinus as his colleague, and to have served as urban prefect of Rome.