Rhescuporis I was the son and heir of the Roman Client King Cotys I and Roman Client Queen Eunice. He was of Greek, Iranian and Roman ancestry. His paternal uncle Mithridates, was a previous Bosporan King.

His paternal grandmother was the late Bosporan Roman Client Queen Gepaepyris. Through her, Rhescuporis I was a descendant of the Roman Triumvir Mark Antony from his second marriage to his paternal cousin Antonia Hybrida Minor (second daughter of Roman Republican Politician Gaius Antonius Hybrida, Antony's paternal uncle), thus Rhescuporis I was related to various members of the Julio-Claudian dynasty. Through Gepaepyris, he was a descendant of Roman Client Rulers Polemon I of Pontus, Pythodorida of Pontus and Cotys VIII of Thrace. The name of Rhescuporis I is an ancestral monarch name of Thracian origin that derived from the family of his paternal grandmother.

His paternal grandfather was the late Bosporan Roman Client King Aspurgus. Through him, Rhescuporis I, was a descendant of the Greek Macedonian Kings: Antigonus I Monophthalmus, Seleucus I Nicator and the regent, Antipater. These three men served under King Alexander the Great. Through his grandfather, Rhescuporis I was a descendant of the monarchs Mithridates VI of Pontus and his first wife, his sister Laodice and the previous Bosporan King Asander.

Little is known of the life of Rhescuporis I. In 63 for unknown reasons, the Roman Emperor Nero disposed Cotys I, and his fate afterwards is unknown. The Bosporan Kingdom was incorporated as a part of the Roman Province of Moesia Inferior from 63 to 68. Perhaps Nero wanted to minimize the role, power and influence of local client rulers and desired the Bosporan to be completely governed by the Roman state.

In June 68, Nero had died and Galba succeeded Nero as Roman Emperor. With the help from his mother, Rhescuporis I successfully attempted to have the Bosporan Kingdom restored as a client kingdom to him from Galba. He was able to make the Bosporan Kingdom stable and semi-independent once more. At least in the first year of his reign, his mother co-ruled with him and acted as his regent. The Bosporan Kingdom was able to continue their trade with Anatolia. His royal title on coins is in Greek: ΒΑΣΙΛΕΩΣ ΡΗΣΚΟΥΠΟΡΙΔΟΣ or of King Rhescuporis. Rhescuporis I was a contemporary of the rule to the Year of the Four Emperors, the Flavian dynasty, in particular the reign of Roman Emperor Domitian.

Rhescuporis I reigned as king until AD 93. [1] His wife is unknown, but from this marriage he had a son Sauromates I, who succeeded him. Through Sauromates I, Rhescuporis I had many descendants who ruled the Bosporan throne until the mid-4th century, four of whom bore his name.

The Bosporan Kingdom, also known as the Kingdom of the Cimmerian Bosporus, was an ancient Greco-Scythian state located in eastern Crimea and the Taman Peninsula on the shores of the Cimmerian Bosporus, the present-day Strait of Kerch. It was the first truly 'Hellenistic' state in the sense that a mixed population adopted the Greek language and civilization, under aristocratic consolidated leadership. Under the Spartocid Monarchs the aristocracy of the kingdom adopted a double nature of presenting as archons to Greek subjects and kings to barbarians which some historians consider unique in ancient history.The Bosporan Kingdom became the longest surviving Roman client kingdom. The 1st and 2nd centuries AD saw a period of a new golden age of the Bosporan state. It was briefly incorporated as part of the Roman province of Moesia Inferior from 63 to 68 AD, under Emperor Nero, before being restored as a Roman client kingdom. At the end of the 2nd century AD, King Sauromates II inflicted a critical defeat on the Scythians and included all the territories of the Crimea in the structure of his state.

Marcus Antonius Polemon Pythodoros, also known as Polemon II of Pontus and Polemon of Cilicia, was a prince of the Bosporan, Pontus, Cilicia, and Cappadocia. He served as a Roman Client King of Pontus, Colchis, and Cilicia.

Antonia Tryphaena also known as Tryphaena of Thrace or Tryphaena was a Pontian Princess and a Roman Client Queen of Thrace. She co-ruled with her son Rhoemetalces II.

Gepaepyris was a Thracian princess, and a Roman Client Queen of the Bosporan Kingdom, the longest known surviving Roman Client Kingdom. She ruled in AD 37/38–39. 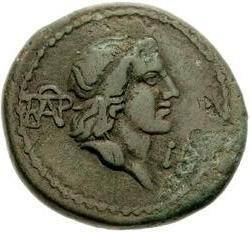 Tiberius Julius Aspurgus Philoromaios was a prince and Roman client king of the Bosporan Kingdom.

Tiberius Julius Cotys I Philocaesar Philoromaios Eusebes, also known as Cotys I of the Bosporus, was a Roman client king of the Bosporan Kingdom. 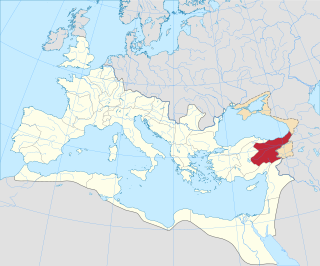 Sauromates I was a Roman client king of the Bosporan Kingdom.

Cotys III or Kotys III was a Roman client king of the Bosporan Kingdom. Like many of the other late Bosporan kings, Cotys III is known mainly from coinage, meaning that the historical events of his reign are largely unknown. His coins are known from the period 228–234. He is known from an inscription to have been the son of his predecessor, Rhescuporis III.

Rhescuporis V, also transliterated as Rheskuporis or Rheskouporis, was the king of the Bosporan Kingdom, a Roman client state, from 240 to 276. The reign of Rhescuporis V overlaps with those of several other Bosporan kings; Pharsanzes (253–254), Sauromates IV (276) and Teiranes (276–278). It is unclear what their relationships and status were relative to each other and if they were co-rulers or rival contenders for the throne.

Cotys III was the Sapaean Roman client king of eastern Thrace from 12 to 18 AD.

The Crimean Peninsula was under partial control of the Roman Empire during the period of 47 BC to c. 340 AD. The territory under Roman control mostly coincided with the Bosporan Kingdom . Rome lost its influence in Taurica in the mid third century AD, when substantial parts of the peninsula fell to the Goths, but at least nominally the kingdom survived until the 340s AD. The Eastern Roman Empire, the eastern part of the Roman Empire that survived the loss of the western part of the empire, later regained Crimea under Justinian I. The Byzantine Empire controlled portions of the peninsula well into the Late Middle Ages.

Eunice was the queen of the Bosporan Kingdom by marriage to King Cotys I. She appears to have been regent during the minority of her son Rhescuporis I in 68-69.

The Tiberian-Julian dynasy was the third and last dynasty of the kingdom of Cimmerian Vosporus. The members of it bare the names Tiberius Julius before their names, on behalf of the Roman Emperor Tiberius Julius. The first member of the family is Tiberius Julius Aspurgus.