When Cotys II died in 132, Rhoemetalces succeeded him. Rhoemetalces ruled as Bosporan King from 132 until his death in 153. He was a contemporary to the rule of the Roman Emperors Hadrian and Antoninus Pius. On coinage his royal title is in Greek: ΒΑΣΙΛΕΥΣ ΡΟΙΜΗΤΑΛΚΑΣ or of King Rhoemetalces.

Hadrian was Roman emperor from 117 to 138. He was born Publius Aelius Hadrianus in Italica, near Santiponce, Spain into a Hispano-Roman family. His father was of senatorial rank and was a first cousin of Emperor Trajan. He married Trajan's grand-niece Vibia Sabina early in his career, before Trajan became emperor and possibly at the behest of Trajan's wife Pompeia Plotina. Plotina and Trajan's close friend and adviser Lucius Licinius Sura were well disposed towards Hadrian. When Trajan died, his widow claimed that he had nominated Hadrian as emperor immediately before his death. 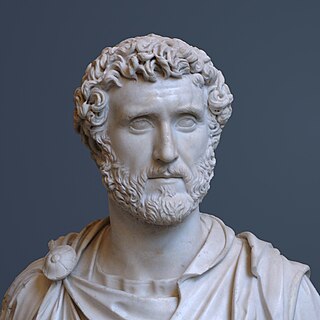 According to the Augustan History, at an unknown date in the reign of Antoninus Pius, Rhoemetalces had travelled to Rome for a hearing of a dispute between him and the imperial commissioner. The nature and causes leading to this dispute are unknown. After the hearing had concluded, the emperor sent Rhoemetalces back to the Bosporan.

The Augustan History is a late Roman collection of biographies, written in Latin, of the Roman Emperors, their junior colleagues, designated heirs and usurpers of the period 117 to 284. Supposedly modeled on the similar work of Suetonius, The Twelve Caesars, it presents itself as a compilation of works by six different authors, written during the reigns of Diocletian and Constantine I and addressed to those emperors or other important personages in Rome. The collection, as extant, comprises thirty biographies, most of which contain the life of a single emperor, while some include a group of two or more, grouped together merely because these emperors were either similar or contemporaneous.

Like his paternal grandfather Sauromates I, Rhoemetalces appeared to be a religious person and was involved in the worship of the Goddess Aphrodite and her cult. This can be confirmed by an inscription found on a statue base from Phanagoria.

Aphrodite is an ancient Greek goddess associated with love, beauty, pleasure, passion and procreation. She is identified with the planet Venus, which is named after the Roman goddess Venus, with whom Aphrodite was extensively syncretized. Aphrodite's major symbols include myrtles, roses, doves, sparrows, and swans.

Not much more is otherwise known on the reign and life of Rhoemetalces. Rhoemetalces married an unnamed woman, and from this marriage; he had a son called Eupator, who succeeded him on his death.

Tiberius Julius Pharsanzes, also known as Pharsanzes was a prince and Roman Client King of the Bosporan Kingdom.

Eunice was the wife of the Roman Client King, Cotys I and through her marriage was a Roman Client Queen of the Bosporan Kingdom.

Rhoemetalces Philocaesar was a prince from Anatolia who lived in the Roman Empire in the 1st century.