Tiberius Sempronius Gracchus may refer to:

Tiberius Sempronius Gracchus was a Roman politician best known for his agrarian reform law entailing the transfer of land from the Roman state and wealthy landowners to poorer citizens. He had also served in the Roman army, fighting in the Third Punic War and in Spain.

Gaius Sempronius Gracchus was a reformist Roman politician in the 2nd century BC. He is most famous for his tribunate for the years 123 and 122 BC, in which he proposed a wide set of laws, including laws to establish colonies outside of Italy, engage in further land reform, reform the judicial system, and create a subsidised grain supply for Rome. 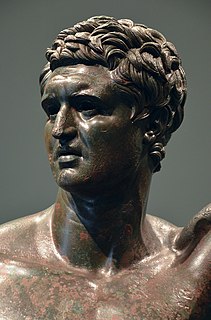 Publius Cornelius Scipio Africanus Aemilianus, known as Scipio Aemilianus or Scipio Africanus the Younger, was a Roman general and statesman noted for his military exploits in the Third Punic War against Carthage and during the Numantine War in Spain. He oversaw the final defeat and destruction of the city of Carthage. He was a prominent patron of writers and philosophers, the most famous of whom was the Greek historian Polybius. In politics, he opposed the populist reform program of his murdered brother-in-law, Tiberius Gracchus.

Publius Cornelius Scipio Nasica Serapio was a politician of the Roman Republic best remembered today for leading a mob that assassinated the tribune Tiberius Gracchus, and hunted and killed Tiberius' supporters afterwards.

Scipio Nasica was the name of several members of the Scipiones, a branch of the patrician Roman gens Cornelia. Metellus Scipio was born into this family, but was later adopted out to the gens Caecilia. He still retained his former name by combining it with that of his adoptive father.

Tiberius Sempronius Gracchus was a Roman politician and general of the 2nd century BC. He served two consulships, one in 177 and one 163 BC, and was awarded two triumphs. He was also the father of the two famous Gracchi brothers: Tiberius and Gaius.

Gaius Claudius Centho or Cento was a 3rd-century BC member of a prominent and wealthy patrician Roman Republican family. He was the third son of Appius Claudius Caecus, and a member of the Claudii. He was consul in the year 240 BC. He was Roman censor in 225, interrex in 217 and Roman dictator in 213.

Gaius Laelius Sapiens, was a Roman statesman, best known for his friendship with the Roman general and statesman Scipio Aemilianus. He was consul of 140 BC, elected with the help of his friend, by then censor, after failing to be elected in 141 BC. Gaius Laelius Sapiens was the son and heir of the Punic War general Gaius Laelius, himself consul in 190 BC. This Laelius had been former second-in-command and long-time friend, since childhood, of the Roman general and statesman Scipio Africanus. The younger Laelius was apparently born around 188 BC, after his father had become consul but had failed to win command of the campaign against Antiochus III the Great of Syria, which would have made him a rich man. His mother's name is unknown.