In 1998 Clenci established Allure Management, a model management company based in Bucharest, Romania. [23]

Andre Birleanu is a Russian-Romanian supermodel and executive producer involved in numerous campaigns and international fashion publications. He is a television personality featured on MTV and Vh1 channel's America's Smartest Model in over 42 countries internationally. Birleanu was featured in many global campaigns throughout the years including for Dolce & Gabbana with actress Monica Bellucci, daughter Azzura and ex-wife Eloisa Birleanu. As executive producer, Birleanu has created fashion covers, global advertising campaigns, interviews and editorials for publications such as Vogue, Elle, GQ, Schön, L'Officiel, Hunger, Numéro, USED, Tatler, S Magazine, and Harper's Bazaar. 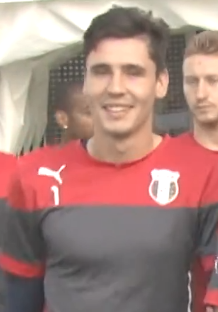 Silviu Lung is a Romanian professional footballer who plays as a goalkeeper for Turkish club Kayserispor.

Born in London, Pamela Hanson is an American photographer and filmmaker. She is one of the first female photographers to succeed in the fashion industry. Her unique bond with her subjects has allowed her to capture images for fashion editorial and advertising campaigns for over 30 years. She has worked throughout the world and published three books. She is currently based in New York.

Frédéric Lagrange is a fashion, travel, portrait, and lifestyle photographer.

Rumi Neely is an American fashion blogger known for her style and photography.

Gia Johnson-Singh is a British fashion model best known for appearances in Vogue and is the face of Tia Maria. She was named Vogue's "Best Hot Stepper on the Ramp" Award as well as making their influential Power List. In 2011, Femina named her one of India's 50 Most Beautiful People.

Antoine Verglas is a New York City based photographer who obtained popular acclaim for his uninhibited documentary-style fashion photographs of 1990s supermodels such as Claudia Schiffer and Stephanie Seymour.

Kai Z Feng is a Chinese-born photographer who has risen to become one of the most well-known fashion photographers from China at an international level. His work includes celebrity portraits and high fashion, shooting both commercial and editorial work for many international brands and publications.

Candice Farmer is an underwater fashion and beauty photographer, based in Uckfield, England. She is known professionally by the mononym, Candice.

Garance Doré is a French photographer, illustrator and author, best known for her fashion blog. She is based in Venice, Los Angeles.

Ioana Ciolacu Miron is a Romanian fashion designer. She received a Designer for Tomorrow Award from Stella McCartney, and has founded her own sustainable fashion Ioana Ciolacu label.

Alyona Subbotina is a Kazakhstani fashion model and entrepreneur. She gained international recognition after exclusively opening the Givenchy fashion show in Paris in 2011. She has worked with designers such as Giorgio Armani, Givenchy and Helmut Lang.

Bridget Malcolm is an Australian model who is best known for appearing in two Victoria's Secret Fashion shows in addition to walking in other fashion shows such as Ralph Lauren and Stella McCartney. Besides shows, Malcolm has also appeared in magazines such as Harper's Bazaar, Playboy, and Elle.

Benjamin Kaufmann is a London-based fashion and beauty photographer.

Doina Ciobanu is a London-based fashion influencer, model, and sustainability advocate. Described as having one of the strongest personal brands in the United Kingdom’s fashion industry, Ciobanu has modelled and collaborated with a list of luxury fashion brands that includes Agent Provocateur, Burberry, and Versace. Her sustainability advocacy has seen her act as an ambassador of the No More Plastic foundation and the United Nations Development Programme.

Steve Hiett was an English photographer, musician, artist and graphic designer based in Paris.

Adut Akech Bior is a South Sudanese-Australian model. Akech made her fashion week runway debut as an exclusive in the Saint Laurent S/S 17 show and went on to close both their F/W 17 and S/S 18 shows as an exclusive. In 2018, she was chosen as "Model of the Year" by models.com, an honour which was repeated the next year.