Tibia Micro Edition was inspired by the online role-playing game Tibia. It was first marketed by CipSoft GmbH only to T-Mobile customers using Nokia 3650 and Nokia 7650 cell-phones. A Java version was released in 2006. Around 50,000 players were registered on the 30 central CipSoft servers which are all located in Germany.

TibiaME is generally free of charge for all mobile users. Players who like to dive into further parts of the TibiaME world can buy a premium account for a fee. TibiaME is especially popular in Eastern Europe and the Far East. In addition to English, TibiaME can be played in German, Portuguese and Malay.

In TibiaME there are two different vocations to choose from.

Warriors Warriors rely on their strength and dexterity which is why they are not very good when using magical weapons. However, they are fearsome in combat and their battle skill increases considerably with every level they gain.

Wizards Wizards prefer to fight with magical weapons which, whilemore effective than normal weapons, consume mana with every successful hit. A wizard’s battle skill increases only slightly when gaining a level. However, this is counterbalanced by their magical power which far exceeds the limited abilities of the warrior class.

The Fantasy Trip (TFT) is a role-playing game that was designed by Steve Jackson and was published by Metagaming Concepts.

A massively multiplayer online game is an online game with large numbers of players, typically from hundreds to thousands, on the same server. MMOs usually feature a huge, persistent open world, although some games differ. These games can be found for most network-capable platforms, including the personal computer, video game console, or smartphones and other mobile devices. 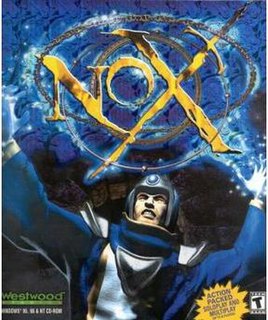 Nox is an action role-playing game developed by Westwood Pacific and published by Electronic Arts in 2000 for Microsoft Windows. It details the story of Jack, a young man from Earth who is pulled into a high fantasy parallel universe and has to defeat the evil sorceress Hecubah and her army of Necromancers to return home. Depending on the player's choice of character class at the beginning of the game, the game follows three largely different linear storylines, each leading to its unique ending. In the multiplayer, players can compete against each other in various game modes such as deathmatch and capture the flag, while the freely downloadable expansion pack NoxQuest added a cooperative multiplayer mode. The game was generally well received by critics and the media.

Tibia is a MMORPG created by CipSoft. It is one of the oldest MMORPGs and was considered most noteworthy in its early years. However, with the development of new MMORPGs, its popularity has grown much slower than others. It was first released in January 1997. It is a free game which is open to the public, though players have the option to pay a fee in order to upgrade to a premium account, granting special in-game benefits, including additional areas to explore, access to vocation promotions, and extra spells.

The Paladin is a staple character class found in computer and pen and paper role-playing games. The template may have been introduced through the eponymous character class from Dungeons & Dragons. The broad concept is that of a "Holy Warrior", combining aspects of both Warrior and Cleric.

Champions: Return to Arms is an action role-playing set in the EverQuest universe. It is the sequel to Champions of Norrath and was developed by Snowblind Studios.

The fighter is one of the standard playable character classes in the Dungeons & Dragons fantasy role-playing game. A fighter is a versatile, weapons-oriented warrior who fights using skill, strategy and tactics.

CipSoft GmbH, or CIP, is a video game developer based in Regensburg, Germany which produces the online roleplaying game Tibia. They also market Tibia Micro Edition, a cell-phone-based version of the game.

The Nokia Game was a series of Alternate Reality Games (ARGs) produced by Human-i Euro RSCG for Nokia. The concept was developed by Joost van Liemt and Sicco Beerda. Although mainly a competition through which Nokia promotes their latest phones, it is a true ARG which fuses various forms of mass media, promotes communication between players, and features involving storylines which change every year.

Nokia X5-00/01 are a pair of smartphones in the X-Series of Nokia's mobile phones. The original China model comes with Symbian OS 9.3, while the worldwide model uses S60 3rd Edition FP2.

Rappelz is a free-to-play massively multiplayer online role-playing game. The game is developed by the Korean company Gala Lab, formerly nFlavor. It is published in Europe and North America by Webzen, Inc. in English, French, German, Italian, Polish and Turkish. As of October 2008, Rappelz was also being published by the South East Asia based game publishing company AsiaSoft as RappelzSEA, but was later dropped by the company on 1 September 2009. The game was also published in Arabic for MENA gamers by the Emirati company Game Power 7. The game was released under a different title known as Hope of Nations, and was commercially launched on 16 March 2009. A new version was released 15 July 2010 by EagleGame in the Philippines, but the PH/SEA version closed in 2016. As of 6 February 2013 it was confirmed by Rappelz GMs that "Gala Net, Inc. and its subsidiaries Gala Networks Europe and Gala-net Brazil have been acquired by Webzen, Inc.", however it is still being developed by Gala Labs and Gala Japan

The Nokia Asha 311 is a "Full Touch" smartphone powered by Nokia's Series 40 operating system. It was announced at Bangkok by Nokia along with two others Asha Full Touch phones - the Nokia Asha 305 and 306. The 311 is considered to be the flagship of the Asha Full Touch family. Its main features are the Full Touch capacitive touchscreen, the pentaband 3G radio, SIP VoIP over 3G and Wi-Fi and the ability to play games. Nokia Asha 311 is available in a number of languages depending on which territory it is marketed for.

The Nokia 1006 is a phone with a basic design for CDMA Technology. It was announced on 8 January 2009 and was released in the same month. This bar-style mobile has Bluetooth features, voice dialing and also has a GPS of A-GPS type.

Maguss is a free-to-play location-based mobile MMORPG with a fantasy theme. The game offers players a wizarding experience, allowing them to cast spells by drawing glyphs, collect ingredients, brew various potions, battle magical creatures, and duel other players for glory and treasure.