Tibisay Lucena was the president of the National Electoral Council or CNE until 2020, one of the five branches of government of the Bolivarian Republic of Venezuela. She was first elected to this post in 2006, and was reelected in 2009 for the 2009-2013 period. [1] [2] The Supreme Tribunal of Justice (TSJ) appointed Indira Alfonzo on June 12, 2020 as the new president of this entity.

Tibsay Lucena was born in Barquisimeto. She studied cello and performed with Venezuela's National Youth Orchestra and Simon Bolivar Symphony Orchestra (1980–87). Lucena earned a B.A. in sociology from the Central University of Venezuela and worked as a researcher at the Institute of Advanced Studies of Administration. She then pursued graduate studies in the United States, earning an M.A. in sociology from the New School for Social Research. She is an expert in electoral fraud.

Lucena is considered to be pro-PSUV by the opposition, despite that the position she holds must be exercised with neutrality.

In July 2017, thirteen senior officials, including Lucena, of the Venezuelan government associated with the 2017 Venezuelan Constituent Assembly elections were sanctioned by the United States for their role in undermining democracy and human rights. [5] [6]

Canada sanctioned 40 Venezuelan officials, including Lucena, in September 2017. [7] [8] The sanctions were for behaviors that undermined democracy after at least 125 people will killed in the 2017 Venezuelan protests and "in response to the government of Venezuela's deepening descent into dictatorship". [7] Canadians were banned from transactions with the 40 individuals, whose Canadian assets were frozen. [7]

The European Union sanctioned seven Venezuela officials, including Lucena, on 18 January 2018, singling them out as being responsible for deteriorating democracy in the country. [9] The sanctioned individuals were prohibited from entering the nations of the European Union, and their assets were frozen. [10]

On 20 April 2018, the Mexican Senate froze the assets of officials of the Maduro administration, including Lucena, and prohibited them from entering Mexico. [13]

Diosdado Cabello Rondón is a Venezuelan politician and current member of the National Assembly of Venezuela, where he previously served as Speaker. He is also an active member of the Venezuelan armed forces, with the rank of captain.

Cilia Adela Gavidia Flores de Maduro is a Venezuelan lawyer and politician. She is married to the President of Venezuela Nicolás Maduro, making her the First Lady. Since 2015, she has also been a deputy in the National Assembly of Venezuela, of which she was president from 2006 to 2011, for her home state of Cojedes. In 2017, the Constituent National Assembly was founded, in which she is a member of the Presidential Commission. 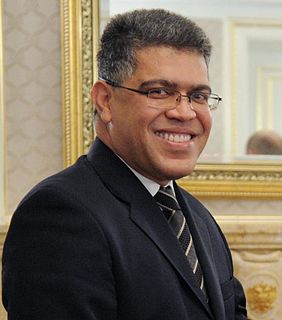 Freddy Alirio Bernal Rosales is the ex-mayor of the Libertador Municipality in Caracas, Venezuela and a member of the United Socialist Party of Venezuela (PSUV).

Francisco Gómez is a Venezuelan politician. He was governor of Bolívar state. In the 2008 Venezuelan regional elections he won 67% of the vote, against Andrés Velásquez' 30%. He was previously president of the Corporacion Venezolana de Guayana (CVG).

José David Cabello Rondón was appointed Venezuelan Minister of Infrastructure in July 2006. In February 2008 he became the head of SENIAT, the Venezuelan tax agency. He had previously been head of Conviasa.

Julián Isaías Rodríguez Díaz is a Venezuelan politician, diplomat and lawyer. He was appointed Vice President of Venezuela on 29 January 2000 by Hugo Chávez, and served in the post until 26 December 2000.

Gladys María Gutiérrez Alvarado was the head of the Venezuelan Supreme Court from May 2013 until February 2017.

Delcy Eloína Rodríguez Gómez is a Venezuelan politician who has been Vice President of Venezuela since 14 June 2018, with her constitutional position under dispute since 2019. She was also Minister of Popular Power for Communication and Information of Venezuela from 2013 to 2014, Minister of Foreign Affairs from 2014 to 2017 and President of the Constituent Assembly of Venezuela from 4 August 2017 to 14 June 2018. She is the target of multiple international sanctions.

Carmen Teresa Meléndez Rivas is a Venezuelan politician and Navy admiral. She was Minister of Interior and Justice from 25 October 2014 to 9 March 2015, and Chief of Staff in President Nicolás Maduro's cabinet for nearly six months from March to September 2015.

Gustavo Enrique González López was the Venezuelan Minister of Popular Power for Interior, Justice and Peace (MPPRIJP) in 2015-2016 and is the current director of the National Intelligence Service (SEBIN).

Néstor Luis Reverol Torres holds the position of Minister of the People's Power for Interior Relations and Justice of Venezuela and is currently Commander General of the National Guard of Venezuela. On 3 August 2016, he was appointed as interior minister by President Nicolás Maduro.

Maikel José Moreno Pérez is a lawyer, doctor of Venezuelan constitutional law, and judge who currently serves as president of the Supreme Tribunal of Justice of Venezuela.

Tarek William Saab is a Venezuelan politician, lawyer and poet. He is a leader of the Fifth Republic Movement (MVR) party founded by Hugo Chávez, President of Venezuela, who publicly called him "The Revolution's Poet". He was the Governor of Anzoátegui from 2004 to 2012, and a member of the Committee for Justice and Truth since 2013. In December 2014, he was elected "People's Defender", or Ombudsman, by the National Assembly for 2014–2021 term. Saab was appointed as President of the Republican Moral Council of Venezuela by the People's Power in 2015. On 5 August 2017, he was appointed as Prosecutor General of Venezuela by the National Constituent Assembly in substitution of Luisa Ortega Diaz.

During the crisis in Venezuela, governments of the United States, the European Union, Canada, Mexico, Panama and Switzerland applied individual sanctions against people associated with the administration of Nicolás Maduro. The sanctions were in response to repression during the 2014 Venezuelan protests and the 2017 Venezuelan protests, and activities during the 2017 Venezuelan Constituent Assembly election and the 2018 Venezuelan presidential election. Sanctions were placed on current and former government officials, including members of the Supreme Tribunal of Justice (TSJ) and the 2017 Constituent National Assembly (ANC), members of the military and security forces, and private individuals accused of being involved in human rights abuses, corruption, degradation in the rule of law and repression of democracy.

Sergio José Rivero Marcano is a Venezuelan general. As of 2017, he was the Commander General of the Venezuelan National Guard. He was formerly a commander of the National Bolivarian Armed Forces of Venezuela.

Socorro Elizabeth Hernández de Hernández is a Venezuelan rector of the country's National Electoral Council (CNE); the United States Department of the Treasury says she was involved in changes to polling stations before the 2017 Venezuelan Constituent Assembly elections in Venezuela.

Sandra Oblitas Ruzza is a Venezuelan vice president and rector of the country's National Electoral Council (CNE); the United States Department of the Treasury says she was involved in disruptions during the 2017 Venezuelan Constituent Assembly elections in Venezuela.

Jesús Rafael Suárez Chourio is a Venezuelan military officer who served as the General Commander of the National Bolivarian Armed Forces of Venezuela from 20 June 2017 until 8 July 2019.