Tibiscus University of Timișoara is an accredited university in Timișoara, Romania. It was established in 1991 and accredited by Law 484/11.07.2002.

Built in 1992 with the aim to support the educational process, the library has around 70,000 publications.

Periodical newspaper edited since 1997 by the Journalism Faculty students.

Timișoara is the capital city of Timiș County, the 3rd largest city in Romania and the main social, economic and cultural centre in western Romania.

The University of Northern Virginia (UNVA) was an unaccredited for-profit private undergraduate and graduate university in Annandale, Virginia, The university offered bachelors, Masters and doctoral degrees. Although UNVA was not well known within the United States, it called itself the most popular American university for students from India.

The West University of Timișoara is a university located in Timișoara, Romania. Established in 1962, it is organized in 11 faculties. Classified as a research and education university by the Ministry of Education, it is one of the five members of the Universitaria Consortium. The West University is an institution of the National System of Research, Development and Innovation in its capacity as an accredited higher education institution.

The American Academy for Liberal Education (AALE) is a United States-based educational accreditation organization with a focus on fostering liberal arts education, both in higher education and in earlier schooling.

Mircea Florian, is a Romanian multi-instrumentalist musician, multimedia artist and computer scientist, based in Germany. Having started his musical career as a folk rock singer, in the late 1960s, he developed a fusion between Romanian folklore and Eastern music, especially Indian sound, moving into psychedelic music. He founded Ceata Melopoică ensemble, with whom he recorded a concept album. These and his solo acts earned him a cult following among rebellious youth, establishing his reputation as one of the most original contributors to Romanian pop music. Florian was also an early member of Cenaclul Flacăra, a traveling music and literature circle, but parted with it when it became increasingly nationalistic. 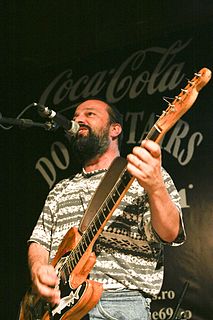 Ioan Gyuri Pascu was a Romanian pop music singer, producer, actor and comedian, also known for his participation in the comedy troupe Divertis and for his activity in Romanian cinema and television. Moving between rock music, rhythm and blues, reggae and jazz, the multi-instrumentalist Pascu founded a number of bands and registered success particularly during the early 1990s, when he was the lead singer of a group known as The Blue Workers. Pascu was the manager of several alternative music acts with his label Tempo Music, and remains an outspoken critic of Romanian commercial radio.

Elena Ceaușescu was a Romanian communist politician who was the wife of Nicolae Ceaușescu, General Secretary of the Romanian Communist Party and leader of the Socialist Republic of Romania. She was also the Deputy Prime Minister of Romania.

International American University (IAU) is a private, for-profit university of higher learning offering programs through both distance education and classroom instruction. The University started operations in 2005 in Los Angeles, as the Management Institute of America, Inc. It currently operates from facilities in Palmdale, California and Los Angeles, California. 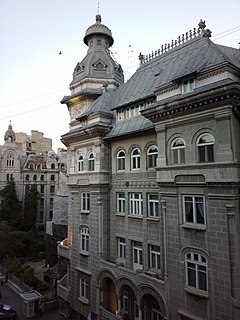 The Spiru Haret University is a private university in Bucharest, Romania, founded in 1991 by the president of Tomorrow's Romania Foundation, Aurelian Gh. Bondrea, as part of the teaching activities of this foundation. The university claims this has been done according to the model used by Harvard University. The university bears the name of a scientist and reformer of the Romanian education, Spiru Haret, who lived before the Great War.

The Embassy of Romania in Chișinău is the diplomatic mission of Romania to Moldova. The embassy is located in Central Chișinău, at 66/1 Bucureşti Street.

The buw Holding GmbH, was an owner-run German company based in Osnabrück acquired by Convergys through a definitive merger, is especially known for its call centres. buw has altogether about 6,000 employees who work in Osnabrück, Münster, Halle, Schwerin, Berlin, Leipzig, and Wismar. in Germany, Pécs in Hungary, and Timișoara and Cluj in Romania.

Arcobara was a fort in the Roman province of Dacia in the 2nd and 3rd centuries AD. It was unearthed in the village Ilişua in 1978. The fort was edified by Ala I Tungrorum Frontoniana. On the site a significant number of ballista projectiles were discovered: 27 stone projectiles having diameter between 7 and 13.5 cm and weigh up to 2 kg. The artillery was used as defensive, probably located in the fort's towers. These artifacts indicates the presence of ballistarii in this fort.

The Diocese of Caransebeș is a Romanian Orthodox diocese based in Caransebeș, Romania, in the historic region of the Banat, and covering Caraș-Severin County. Established by the 17th century, it was moved to present-day Serbia during the 18th century, before being restored in 1865. It was dissolved in 1949 and revived in its current form in 1994.