Tibor Živković (Serbian Cyrillic : Тибор Живковић; 11 March 1966 – 26 March 2013) was a reputable Serbian academic, historian and Byzantinist who specialised in the period of the Early Middle Ages. [1]

Živković was born in Mostar, and history studied at the Faculty of Philosophy at the University of Belgrade between 1985–90, when he graduated at the Department of Antiquity. He received his MA in 1996 with a thesis slavizacija na teritoriju Srbije VII-XI stoljeća (Slavicization on the territory of Serbia 7th–11th centuries). He received his PhD in 2000 with a dissertation Slavs under Byzantine rule from the 7th to 11th Centuries (until 1025). [2]

He participated as a team leader in archaeological excavations along the Ibar river between 2003 and 2009. He taught general Middle Ages at the Faculty of Philosophy at the University of Banja Luka. [2]

His field of historical research involved complex issues related to the Early Middle Age history of South Slavs, and the territory of Serbia, Bosnia, Croatia, Bulgaria, and Greece. [2] The emphasis in his research was on the history of Serbs in the early Middle Ages. He also researched and gave new insights on the De Administrando Imperio (argued that the chapters on Croats and Serbs were based, besides various sources from Byzantine archive, mainly on a lost source hypothetically called De conversione Croatorum et Serborum and written by Anastasius Bibliothecarius in late 8th century [1] ) and Chronicle of the Priest of Duklja (Gesta Regum Sclavorum), the early ecclesiastical history of the Serbian territory, and the early Serbian rulers. He published many scientific papers and books. [2]

De Administrando Imperio is the Latin title of a Greek-language work written by the 10th-century Eastern Roman Emperor Constantine VII. The Greek title of the work is Πρὸς τὸν ἴδιον υἱὸν Ρωμανόν. It is a domestic and foreign policy manual for the use of Constantine's son and successor, the Emperor Romanos II. It is a prominent example of Byzantine encyclopaedism.

The Chronicle of the Priest of Dioclea or Duklja is the usual name given to a purportedly medieval chronicle written in the late 13th century by an anonymous priest from Duklja. Its oldest preserved copy is in Latin from the 17th century, while it has been variously claimed by modern historians to have been compiled between the late 14th and early 16th centuries.

Časlav was Prince of the Serbs from c. 927 until his death in c. 960. He significantly expanded the Serbian Principality when he managed to unite several Slavic tribes, stretching his realm over the shores of the Adriatic Sea, the Sava river and the Morava valley. He successfully fought off the Magyars, who had crossed the Carpathians and ravaged Central Europe, when they invaded Bosnia. Časlav is remembered, alongside his predecessor Vlastimir, as founders of Serbia in the Middle Ages.

The term Unnamed Prince of Serbia, or the Unknown Prince, refers to the Serbian prince from the first half of the 7th century, who according to the De Administrando Imperio supposedly led his people from their original homeland in White Serbia, to settle in the Balkans during the reign of Byzantine Emperor Heraclius (610–641), as mentioned in Emperor Constantine VII's work De Administrando Imperio. The work does not record his name, but states that he was the progenitor of the first Serbian dynasty, and that he died before the arrival of the Bulgars (680), succeeded by his son, and then grandson. 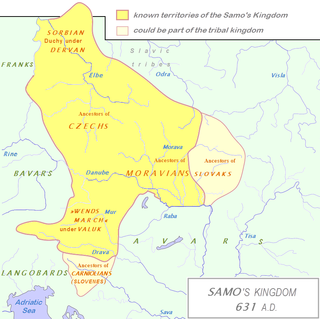 Dervan or Derwan was an early duke of the Sorbs.

The History of the Serbs spans from the Early Middle Ages to present. Serbs, a South Slavic people, traditionally live mainly in Serbia, Montenegro, Bosnia and Herzegovina, Croatia and North Macedonia. A Serbian diaspora dispersed people of Serb descent to Western Europe, North America and Australia.

Vladimir II was King of Duklja from 1103 to 1113. He was a son of prince Vladimir, the oldest son of King Mihailo I of Duklja, and thus a nephew of King Constantine Bodin. He married a daughter of Vukan, the Grand Prince of Serbia, thereby ending rivalries between the two polities. Vladimir had been appointed the rule of Duklja by his father-in-law Vukan, after the death of his uncle, former King Kočopar, in Zahumlje. He was poisoned in 1118 on the orders of Queen-Dowager Jaquinta, the widow of his uncle, Constantine Bodin. Jaquinta soon appointed her son, George, to the throne.

Grubeša Branislavljević was Prince and ruler of Duklja from 1118 to 1125. After the Byzantine Empire defeated King George I of Duklja in 1118, Grubeša assumed the throne as a Byzantine protégé. The Byzantines entitled Grubeša the rule in Duklja, as well as providing him with an army that he would command against George, who was backed by the Grand Principality of Serbia under the rule of the Vukanović dynasty. Grubeša reigned until his death in 1125, when he was defeated by George. He is buried at the Church of Saint George in Bar. 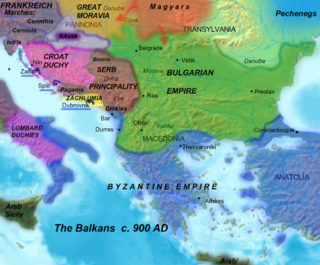 Petar Gojniković or Peter of Serbia was Prince of the Serbs from 892 to 917. He ruled and expanded the First Serbian Principality and won several wars against other family members that sought the crown. He was the first Serbian monarch with a Christian (non-Slavic) name.

Mutimir was prince of Serbia from ca. 850 until 891. He defeated the Bulgar army, allied himself with the Byzantine emperor and ruled the first Serbian Principality when the Christianization of the Serbs took place and the Eparchy of Ras was established. 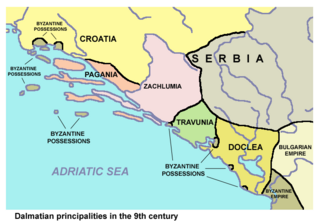 Pomorje, also known as the Lands of Pomorje, is a medieval term, used to designate several maritime regions of Upper Dalmatia and its hinterland, that at the end of the 12th century, during the reign of Stefan Nemanja (1166–1196), became part of the Grand Principality of Serbia, and remained part of the medieval Kingdom of Serbia, whose rulers were styled with the title: "crowned king and autocrat of all Serbian and coastal lands".

Pribislav was Prince of the Serbs for a year, in 891–892, before being deposed by his cousin Petar. He was the eldest son of Mutimir of the Vlastimirović dynasty, who ruled during the expanding and Christianization of Serbia. 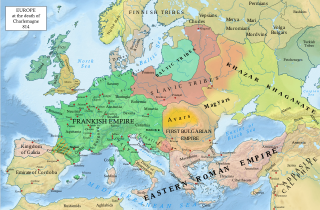 Radoslav was a Serbian Prince who ruled over the early medieval Principality of Serbia at the beginning of the 9th century. He succeeded his father, prince Višeslav, who ruled at the end of the 8th century. Radoslav was succeeded by his son, prince Prosigoj.

Pavle Branovic was the Prince of the Serbs from 917 to 921. He was put on the throne by the Bulgarian Tsar Symeon I of Bulgaria, who had imprisoned the previous prince, Petar after he had become a Byzantine ally. Pavle ruled for four years, before being defeated by Zaharija Pribislavljević, his cousin. Pavle was the son of Bran, the middle son of Mutimir of the Vlastimirović dynasty. 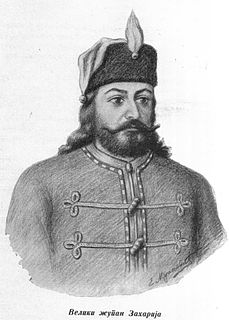 Zaharija Pribislavljević or Zaharija of Serbia was Prince of the Serbs from 922 to 924. He defeated his cousin Pavle in 922. Zaharija was the son of Pribislav, the eldest son of Mutimir of the first Serbian dynasty. 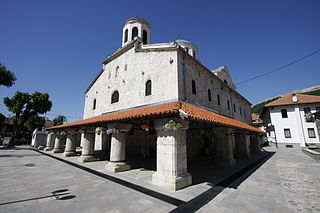 Eparchy of Raška and Prizren or Eparchy of Raška-Prizren and Kosovo-Metohija, is one of the oldest eparchies of the Serbian Orthodox Church, featuring the seat of the Serbian Orthodox Church, the Serbian Patriarchal Monastery of Peć, as well as Serbian Orthodox Monastery of Visoki Dečani, which together are part of the UNESCO World Heritage sites of Serbia. Yet it sustained one of the worst desecrations of historical monuments in history in 1999 and again in 2004 by Albanian irredentists living in Kosovo and Metohija. Serbian cultural and religious sites in Kosovo were systematically vandalized and destroyed over several historical periods, during the Turkish rule, Balkan Wars, World War I, World War II, Yugoslav communist dictatorship, Kosovo War, and 2004 unrest.

The Catepanate of Ras was a province (catepanate) of the Byzantine Empire, established around 971 in central regions of early medieval Serbia, during the rule of Byzantine Emperor John Tzimiskes (969–976). The catepanate was named after the fortified town of Ras, eponymous for the historical region of Raška. The province was short-lived, and collapsed soon after 976, following the Byzantine retreat from the region after the restoration of the Bulgarian Empire.

Tihomir of Raška was a Serbian nobleman, mentioned in the Chronicle of the Priest of Duklja, who served as the Grand Prince of Raška, from around 960 to 969.

Eparchy of Lipljan, later known as the Eparchy of Gračanica or the Eparchy of Novo Brdo is one of the former historical Eastern Orthodox eparchies of Serbian Orthodox located in the central parts of Kosovo region.. It is now part of Eparchy of Raška and Prizren. In older research, it was mistakengly identified as the bishopric of Ulpiana.