Widely regarded as one of the greatest water polo players of all time, [3] Benedek ranks second on the all-time scoring list in Olympic history, with 65 goals. He was the joint top goalscorer at the 1992 Barcelona Olympics, with 22 goals, and the top goalscorer at the 1996 Atlanta Olympics, with 19 goals. Benedek is the ninth player to compete in water polo at five Olympics, and one of ten male athletes who won three Olympic gold medals in water polo. [1] In 2016, he was inducted in the International Swimming Hall of Fame. [4]

Tibor Benedek died on 18 June 2020 due to pancreatic cancer. His death was announced by the Hungarian Water Polo Federation. [5]

384 present in the national team of Hungary

Brenda Villa is an accomplished American water polo player. She is the most decorated athlete in the world of women’s water polo. Villa was named Female Water Polo Player of the Decade for 2000-2009 by the FINA Aquatics World Magazine. She is one of four female players who competed in water polo at four Olympics; and one of two female athletes who won four Olympic medals in water polo. She is a leading goalscorer in Olympic water polo history, with 31 goals. In 2018, she was inducted into the International Swimming Hall of Fame and the USA Water Polo Hall of Fame.

Gergely "Gergő" Kiss is a Hungarian water polo player who plays for Vasas SC in the Hungarian Championship. He plays on the right side, but moves to 2-meters on offense sometimes. He is considered to be one of the best left-handed water polo players in the world. Kiss is one of ten male athletes who won three Olympic gold medals in water polo.

Tamás Märcz is a Hungarian water polo player who played on the gold medal squad at the 2000 Summer Olympics. He is the head coach of Hungary men's national water polo team since 1 January 2017. 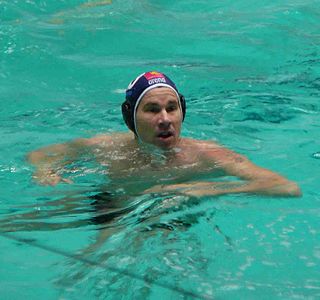 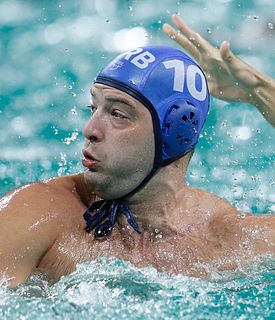 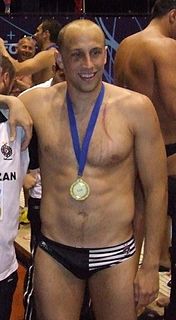 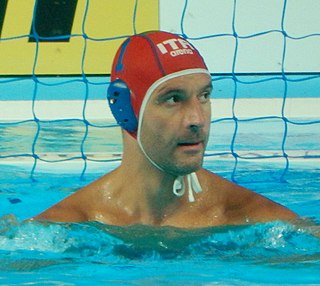 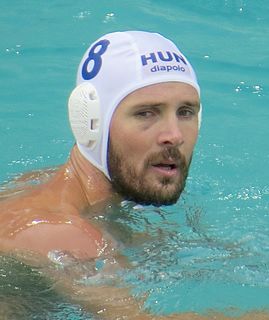 Viktor Nagy is a Hungarian water polo goalkeeper. He took up the sport at the age of 10 at the BVSC Sport Club in Budapest, and made his first appearance for the Hungarian national team in 2006. He won the world title in 2013 and competed at the 2012 and 2016 Olympics.

Márton György Vámos is a water polo player of Hungary. He was part of the Hungarian team at the 2015 World Aquatics Championships.