Tibor Benkő (born 16 October 1955) is a Hungarian military officer and government official. He served as the Minister of Defence from 2018 to 2022. He previously was a four-star general in the Hungarian Defence Forces, serving as Chief of the Defence Staff from 6 June 2010 [1] until 16 May 2018.

Following the 2018 parliamentary election, General Benkő was nominated by Prime Minister Viktor Orbán to serve as Minister of Defence, it was alleged that he would be both a soldier and a minister. [2]

General Benkő is married and has two daughters. [3] 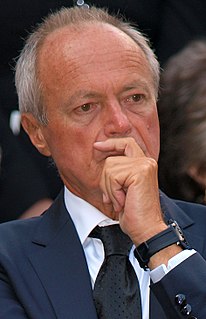 Péter Medgyessy is a Hungarian politician who served as Prime Minister of Hungary from 27 May 2002 to 29 September 2004. On 25 August 2004, he resigned over disputes with coalition partner Alliance of Free Democrats, but remained as acting prime minister for a 30-day period as required by the Constitution, and a few additional days until his successor Ferenc Gyurcsány was confirmed by the National Assembly.

Jean Asselborn is a Luxembourgish politician who has served in the government of Luxembourg as Minister for Foreign Affairs since 2004. He also served as Deputy Prime Minister from 2004 to 2013, under Prime Minister Jean-Claude Juncker.

General Siphiwe Nyanda is a former South African military commander and politician. He was a member of Umkhonto We Sizwe and would serve as Chief of the South African National Defence Force from 1998 to 2005, Minister of Communications from 2009 to 2010 and appointment as a board member of Denel in May 2018.

Walter John Natynczyk, is a Canadian public servant and retired Canadian Army general who has served as Deputy Minister of Veterans Affairs from 2014 to 2021. He was the President of the Canadian Space Agency from 2013 to 2014 and Chief of the Defence Staff of the Canadian Armed Forces from 2008 to 2012.

The Ciarán Tobin extradition case concerns requests for the extradition of Irish businessman Francis Ciarán Tobin from Ireland to Hungary. Tobin is the subject of a European Arrest Warrant issued by the Hungarian authorities after he was found guilty of causing serious bodily harm by negligent driving when his car went out of control killing two Hungarian children in the village of Leányfalu near Budapest in April 2000. He was tried in his absence after he failed to return from Ireland for his trial. 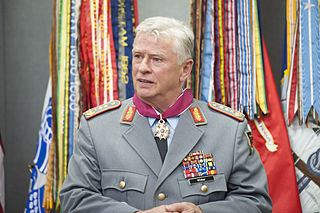 Volker Wieker is the former Chief of Staff of the Bundeswehr, the German armed forces, and a general of the German Army. Trained as an artillery officer, Wieker served in every major foreign Bundeswehr deployment since 1996, including Bosnia, Kosovo and Afghanistan.

Col. Gen. Lajos Fodor is a retired Hungarian military officer and diplomat, who served as the Chief of the General Staff of the Armed Forces of the Republic of Hungary from 1 August 1999 to 28 February 2003.

General Angus John Campbell, is a senior officer in the Australian Army, serving as the Chief of the Defence Force since 6 July 2018. He was previously posted as Commander Operation Sovereign Borders from September 2013 until he was appointed Chief of Army in May 2015.

Kisvárdai KC is a Hungarian handball club from Kisvárda. Since the season 2017/18 it plays in the Nemzeti Bajnokság I. 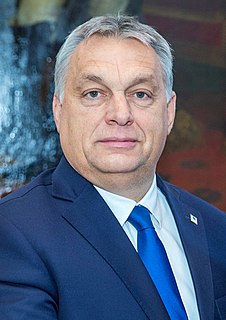 The fourth Orbán government was the Government of Hungary from 18 May 2018 to 24 May 2022, after the 2018 parliamentary elections, led by Viktor Orbán.