Tibor Dombi (Hungarian pronunciation:  [ˈtibor ˈdombi] ; born 11 November 1973) is a Hungarian former professional footballer who played as a right midfielder. [1] He spent most of his career with Debreceni VSC, where he amassed over 400 league appearances in two stints separated by spells at Eintracht Frankfurt in Bundesliga and at FC Utrecht in the Eredivisie.

Born in Püspökladány, Dombi came through the youth setup of Debreceni VSC, and joined the senior team in 1992. He made his debut for the Hungarian national team in 1994, and got 35 caps and one goal until 2001, when he retired from international football. [2] He was a participant at the 1996 Summer Olympics in Atlanta, where Hungary failed to progress from the group stage. He stayed in Debrecen until 1999, celebrating Debreceni VSC's first domestic cup success just before he left for Eintracht Frankfurt. Dombi started his career in Germany well playing in most of the matches in the first half of the season. [3] However, due to language problems and a conflict with the club's manager, Felix Magath,[ citation needed ] he left at the end of the season. [3]

He joined FC Utrecht, the team he played for two seasons before he made his return to Hungary. After he returned to Debrecen, the club's Golden Era started, during which the team won the Hungarian League three times in a row. (Before 2005, Debrecen did not manage to win the league.) In 2009, he was the member of the team that won Debrecen's fourth domestic title.

Dombi made his debut on 1 June 1994, in Eindhoven against the Netherlands.

Tamás Sándor is a Hungarian football player who currently plays for Báránd KSE and formerly for Debreceni VSC.

Leandro Marcolini Pedroso de Almeida, generally known as Leandro, is a Brazilian-born Hungarian footballer. He plays as a midfielder. 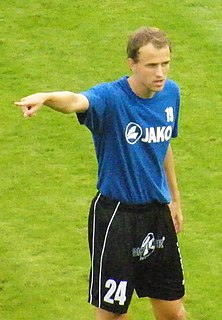 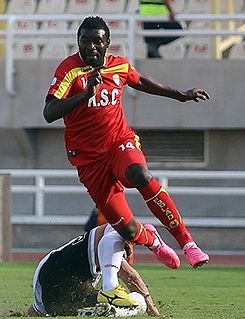 Dorge Rostand Kouemaha is a Cameroonian footballer who plays as a forward for Belgian club Sprimont Comblain.

Csaba Bernáth in Debrecen is a Hungarian footballer who currently plays for Debreceni VSC.

László Zsidai is a Hungarian footballer who currently plays for Paksi FC and the Hungary national team. He usually plays as a defensive midfielder, and can also play as a defender. 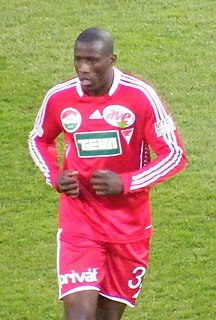 János Balogh is a Hungarian football goalkeeper who is currently playing for Csenger FC. 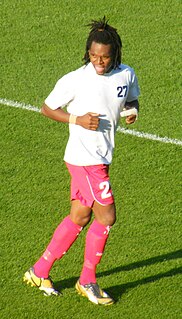 The Nemzeti Bajnokság I 2009–10, also known as NB I, was the 108th season of top-tier football in Hungary. The league was officially named Soproni Liga for sponsorship reasons. The season began on 24 July 2009 and ended on 23 May 2010. Debrecen were the defending champions, and they defended their title. 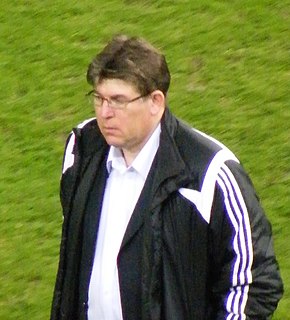 András Herczeg is a Hungarian football manager and former player, who is currently the manager of Debreceni VSC. He worked as the manager of the Debreceni VSC between 2007 and 2010. He led his team to the groups stages of the Champions League 2009–10 season and to the group stages of the Europa League 2010-11 season. His team reached their zenith by beating Sampdoria 2-0 at the Puskás Ferenc Stadium in 2010.

The 2010–11 Nemzeti Bajnokság I, also known as NB I, is the 109th season of top-tier football in Hungary. The league is officially named Monicomp Liga for sponsorship reasons. The season began on 30 July 2010 and will end on 27 May 2011. Debrecen are the defending champions having won their fifth Hungarian championship and second in a row last season.

Debreceni Vasutas Sport Club, commonly abbreviated DVSC, is a Hungarian women's handball club from Debrecen, that plays in the Nemzeti Bajnokság I.

Debreceni Vasutas Sport Club is a professional football club, based in Debrecen, Hungary, that competes in the Nemzeti Bajnokság I, the top flight of Hungarian football. They are best known internationally for reaching the group stages of the UEFA Champions League 2009–10 season. Debrecen have become the most successful club in Hungary since 2000, winning the Hungarian League seven times.

The Nagyerdei Stadion is an all-seater asymmetric football stadium in Debrecen, Hungary and home to Debreceni Vasutas Sport Club. With space for 20,340 spectators, Nagyerdei stadion has the third largest capacity of any Hungarian football stadium, preceded by Puskás Ferenc Stadion and Groupama Aréna and the second largest Nemzeti Bajnokság I stadium after Groupama Aréna. The stadium primarily hosts Debreceni Vasutas Sport Club's home matches. It was opened on 1 May 2014 and the first official match was played between Debrecen and Újpest in the 2013–14 season which ended with a 3-1 victory for the host team.