Gašpar was born in Kežmarok,then Czechoslovakia. He attended Comenius University (Slovak:Univerzita Komenského) from 1982 until he graduated in 1987.

Gašpar assumed office on 15 May 2012. Over his tenure he has led many high-level investigations,including investigations into corruption and theft within the Government of Slovakia. In February 2018,Gašpar and the Slovak Police came under international media attention after the murder of journalist Ján Kuciak. Gašpar announced that his killing was likely to "have something to do with [Kuciak’s] investigative activities". At the time of his murder,Kuciak was working on a report about the Slovak connections of the 'Ndrangheta. [3] The National Police and Government offered €1 million for information leading to the arrest of the murderers. [4] [5] [6] Gaspar resigned in April 2018

MŠK Žilina is a Slovak football club based in the town of Žilina,that is playing in the Slovak Superliga. Since the league inception in 1993,the club has won 7 titles and comes second in All-time table that makes them one of the most successful teams in the competition. The club and their supporters alike are nicknamed Šošoni and play their home games in the Štadión pod Dubňom. In the 2016–17 season,Žilina won the Slovak League.

Comenius University in Bratislava is the largest university in Slovakia,with most of its faculties located in Bratislava. It was founded in 1919,shortly after the creation of Czechoslovakia. It is named after Jan Amos Comenius,a 17th-century Czech teacher and philosopher.

Robert Fico is a Slovak politician who served as the prime minister of Slovakia from 2006 to 2010 and from 2012 to 2018. He has been the first leader of the Direction –Social Democracy (SMER-SD) party since 1999. First elected to Parliament in 1992,he was later appointed to the Council of Europe. Following his party's victory in the 2006 parliamentary election,he formed the first Fico Cabinet.

FC DAC 1904 is a Slovak football team,based in DunajskáStreda. In the 2007 to 2008 season,the team were the west group champions of the Slovak Third League. In the 2008 to 2009 season,after merging with FC Senec,the team entered the CorgoňLiga. The club is strongly supported by the Hungarian minority in Slovakia. 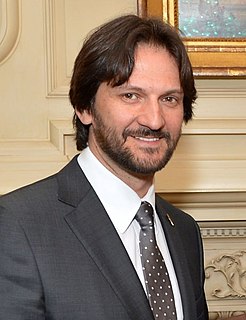 Robert Kaliňák is a Slovak politician who was the Deputy Prime Minister and the Minister of the Interior of Slovakia from 4 July 2006 to 12 March 2018. He is a member of the Direction –Social Democracy party. Kaliňák previously served as Minister of the Interior from 4 July 2006 to 8 July 2010. Kaliňák resigned on 12 March 2018 after the murder of Slovak journalist Ján Kuciak. He left as the longest serving minister in the history of modern Slovakia. 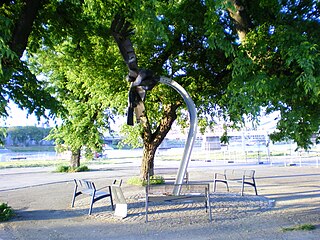 Daniel Tupý was a Slovak university student from Žilina. His violent death shocked the Slovak media and public,and aimed the public attention at the violence and growing dangers of the various Slovak extremist groups.

The assassination of Róbert Remiáš took place on April 29,1996,in Karlova Ves,Bratislava,Slovakia. Remiáš,an ex-police officer,was one of the key figures in the trial against Slovak Information Service in the case of the kidnapping of the Slovak President's son into Austria from 1995. Remiáš's car was remotely detonated in the middle of a busy crossroad at KarloveskáStreet. There were numerous high-ranking mafia organised crime figures present at the crime scene watching the explosion,as well as Slovak Information Service operatives. The crime has never been solved. The anniversary of the assassination was often used by political parties critical of Vladimír Mečiar to call out for the annulment of his amnesties which prevented some key political crimes from the mid-1990s to be investigated.

The Slovak mafia constitutes various organized crime groups in Slovakia,controlled primarily by Slovak interests. The Slovak mafia does not have significant international presence and,even in Slovakia,their activities are limited by boundaries set by the powerful Russian mafia,Ukrainian mafia and Chechen mafia and various Balkan groups controlling much of the heroin trade.

Gorilla scandal is a political corruption scandal in Slovakia. It is named after a Slovak Secret Service wiretap file from the years 2005-2006 which leaked to the internet in December 2011. The file suggests information about politicians,officials and business executives discussing kickbacks in return for procurement and privatization contracts. However the accuracy of the content has not been officially confirmed yet and due to lack of the original tapes it is rather speculation than evidence of true conversations. The file presents alleged massive corruption at the highest level and its leak to the public rocked the Slovak political scene. On October 16,2019,several Slovak mainstream medias received a link to download a file that appear to be a copy of original wiretapping operation Gorilla.

Constantine the Philosopher University in Nitra is a co-educational public university in Nitra,located in southwestern Slovakia. It is a modern educational,scientific and artistic research institution that since 1996 bears the name of one of the most important personalities in Slovak history –Byzantine missionary Saint Cyril,the "Apostle to the Slavs". 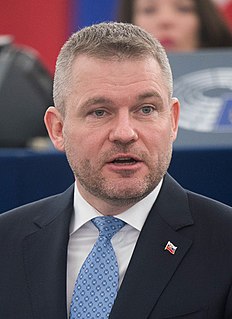 Peter Pellegrini is a Slovak politician who served as the prime minister of Slovakia from 2018 to 2020 and Minister of Health from December 2019 to March 2020. He previously served as deputy prime minister (2016–2018) and minister for Education and Science (2014),as well as spending two years as speaker of the National Council (2014–2016). Pellegrini was a member of Direction –Social Democracy until he left the party and founded Voice –Social Democracy in late June 2020.

Ján Kuciak was a Slovak investigative journalist. Kuciak worked as a reporter for the news website Aktuality.sk,focused mainly on investigating tax fraud of several businessmen with connections to top-level Slovak politicians. He and his fiancée,Martina Kušnírová,were shot dead in February 2018 in their home in VeľkáMača,Galanta District,Slovakia. 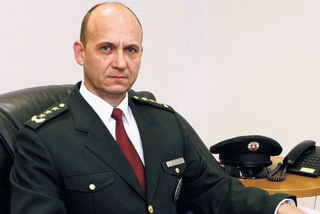 Jaroslav Spišiak is a Slovak former police force President and Vice President throughout most of the 2000s.

Marian Kočner is a Slovak businessman and convicted criminal. With business dealings mostly in the spheres of risk investment,financial development and property,his name appeared in leaked police documents known as the "mafia lists" in 2005,of a list of people suspected of involvement in organized crime and their vehicles,for use of police patrols. Since 10 December 2019 he has been included in the global Magnitsky sanctions list.

Za sklom is a Slovak police procedural television series created by a program director of TV JOJ Roland Kubina and produced by DNA Production. Series,which is inspired by real life,debuted on 28 September 2016 and tells the story of two elite cops who eventually find themselves on the opposite side of the law.

Denník N is a Slovak daily newspaper and a news website which was founded by the former members of the editorial board of SME in 2014.

Good Choice and Moderates is a political party in Slovakia. The party's goals were officially announced at a press conference on 12 September 2019.