Tibor Hollo was born to a Jewish family in Budapest, Hungary and moved to Paris, France in 1933 where he was raised. [1] In 1941, he and his parents were arrested after the German occupation of France and sent to the Drancy internment camp outside of Paris. [1] The family was then shipped to the Auschwitz concentration camp where his mother was separated from him and his father; they never saw her again. [1] He and his father were then forced to march to the Mauthausen-Gusen concentration camp in Austria where they remained until their liberation by the U.S. 11th Armored Division on May 5, 1945. [1] Hollo then returned to Paris, France and obtained a degree in architecture from Ecole Polytechnique Institute before immigrating to the United States with $18 to his name. [1] He worked at a curtain factory before landing a job as an estimator for a general contractor. [1] Noticing that most contractors turned down work on the New York waterfront because it was difficult and dirty work, he started his own firm and was able to underbid the few competitors he had. [1] After winning and successfully completing many jobs, his reputation allowed him to win larger projects around the city and then nationally. [1] By 1956, his contracting company was ranked the tenth largest in the United States. [1]

In 1956, after falling in love with Florida on a business trip, he sold his contracting company and moved to Miami. [1] Recognizing that Miami had limited space as it was defined by the ocean on the east and the Everglades on the west, he believed that the future of the city was in vertical, downtown residential living. [1] He founded Florida East Coast Realty in 1972 and completed his first major building, 888 Brickell Avenue, a seven-story office building. [1] In 1968, he bought six blocks of blighted waterfront property next to the Venetian Causeway; wanting to convert it into a mall, he faced opposition from the local government who did not want to close any streets as required to complete the project. [1] In 1973, Maurice Ferre, the newly elected mayor of Miami and the son of a Puerto Rican real estate developer, gave his support to Hollo allowing him to build the Omni International Mall in 1975 as well as the 810-unit Venetia Tower and marina. [1] Using his political capital with the mayor, he was also able to secure Miami's second ever tax-increment financing zone for the Arts & Entertainment District (then Omni); the zone would use property taxes to improve the streets, utilities, and infrastructure in the neighborhood. [1] The Venetia Tower was not successful due to the collapse of the South American economy in the late 1980s; and in 1988, after having only sold 57 of 810 units, Hollo was forced to cede ownership of the project. [1]

Learning from his experience, he only works on one project at a time and never borrows more than 40% of the project's cost. [1] Hollo went on to build many projects including the U.S. Justice Department Building, the Vizcaya Towers, The Grand Doubletree, the Biscayne Bay Marriott, the Opera Tower, the Bay Parc Plaza and the 868 ft. Panorama Tower. [1] He is currently working on the 1,049 foot One Bayfront Plaza. [4]

Hollo married his first wife, Doris Green, in 1950. They were divorced when Tibor moved to Miami. Doris passed away in 1979. He has been married to his current wife, Sheila Hollo, since 1967. [2] Hollo speaks French, Hungarian, German, Spanish, English, Arabic, Hebrew, and Russian. [2] Tibor's two eldest sons, Harvey and Laurence, are both deceased, while his eldest daughter, Deborah, remains in Michigan. Two of his sons, Wayne Hollo and Jerome Hollo, both work at Florida East Coast Realty as Executive Vice Presidents; and his grandson, Austin Hollo, as a Senior Vice President. [6] 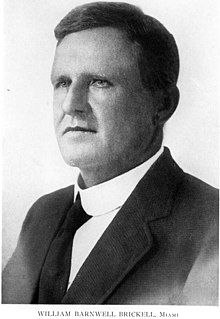 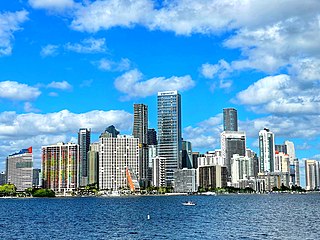 Downtown Miami is the urban city center of Miami, Florida. The city's greater downtown region consists of the Central Business District, Brickell, the Historic District, Government Center, the Arts & Entertainment District, and Park West. It is divided by the Miami River and is bordered by Midtown Miami's Edgewater and Wynwood sections to its north, Biscayne Bay to its east, the Health District and Overtown to its west, and Coconut Grove to its south.

The Opera Tower is a residential skyscraper in Miami, Florida, United States. It was developed by Tibor Hollo's Florida East Coast Realty, and was completed in late 2007. The Opera Tower received its temporary certificate of occupancy on December 26, 2007. The 55-story tower is located at 1750 North Bayshore Drive in Miami's Arts & Entertainment District, just north of Downtown Miami. The building contains 635 uniquely designed luxury condominiums. It is also home to the Japanese-inspired sushi restaurant, NoVe Kitchen and Bar. 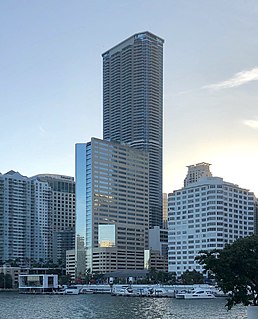 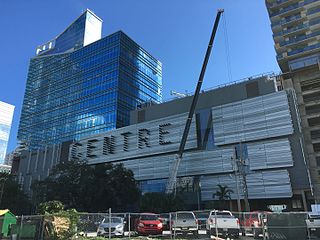 Brickell City Centre is a large mixed-use complex consisting of two residential high-rise towers, two office buildings, a high-rise hotel, and an interconnected five-story shopping mall and lifestyle center covering 9 acres (36,000 m2) located in the Brickell district of Downtown Miami, Florida. Situated at the junction of Miami Avenue and Eighth Street, it spans up to five blocks to the west of Brickell Avenue and to the south of the Miami River. Contrary to the name, the development is not in the traditional downtown Miami city centre, but in the more recently redeveloped financial district of Brickell. The retail shopping and lifestyle center is operated by Simon Malls. 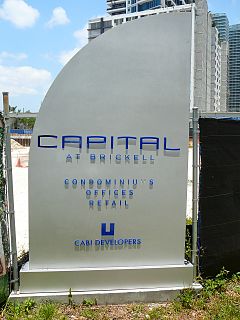 CCCC Miami Towers is the preliminary name for a mixed-use project being planned in the Brickell neighborhood of Miami, Florida, United States. The site is bounded by South Miami Avenue to the east, SW 14th Terrace to the south, SW 1st Avenue to the west, and SW 14th Street to the north. The site broke ground in 2006 and was excavated for a previous project that stalled known as Capital at Brickell. It was revived in 2014 by China City Construction Corp, an affiliate of China Communications Construction Company.

The Villa Magna Condominium Complex was an urban development that was planned to rise on a 2.5-acre (1.0-hectare) plot in Brickell, downtown Miami, Florida. It was approved in 2006 by the city council and the Federal Aviation Administration and construction was slated to begin in April 2007. The ending date was approximated to be late 2008 or early 2009; however, the housing crisis of the late 2000s halted the project. The project was revived as The Towers by Foster + Partners in 2016, after FAA approval of supertall heights. 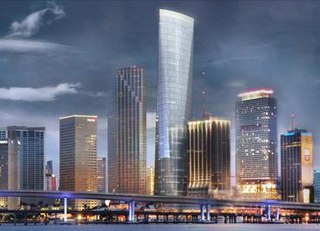 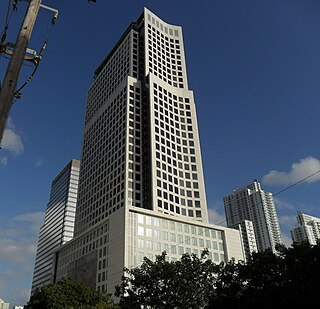 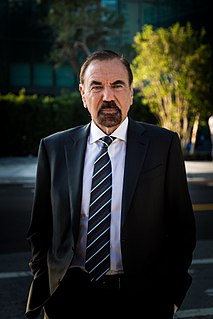 Jorge M. Pérez is an Argentine American billionaire real estate developer, art collector, and philanthropist. He is best known as the chairman and CEO of The Related Group. He is ranked 316th on the Forbes 400 list with a net worth of US$ 2.6 billion as of October, 2018, and 1,833rd on Forbes Billionaires list with US$1.7 billion as of November, 2021.

W. Allen Morris is Chairman and CEO of the Allen Morris Company and a real estate developer and Realtor in the state of Florida. 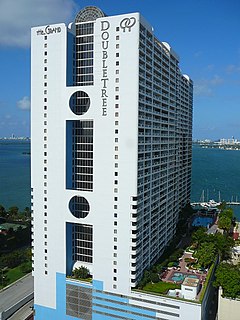 The DoubleTree by Hilton Grand Hotel Biscayne Bay, also referred as The Grand or The Grand DoubleTree, is a high-rise on the north side of Downtown Miami, Florida, United States. It lies within the Arts & Entertainment District. It was completed in 1986 and designed by the Atlanta architectural firm of Toombs, Amisano and Wells. It is a condominium and hotel. Floors 3–9 are hotel rooms. Floors 10–42 contain over 830 condominium units. The hotel portion contains 152 rooms, and was renovated in 2004. The building is very large, with almost 3.5 million square feet (325,161 m2) of floor space, though this likely includes a large parking garage across the street that is shared with the Omni complex. 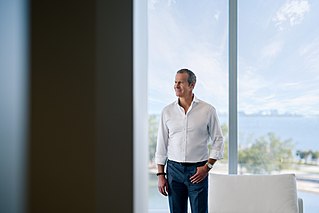 Vladislav Doronin is an international real estate developer and art collector. He is the founder of Moscow-based Capital Group, owner and chairman of Aman Resorts, and chairman and CEO of OKO Group.