Born in Nyíregyháza, in northeastern Hungary, Szamuely was the oldest son of five children of a Jewish family. After completing his university studies, he became a journalist. He started his political activities as a member of the Hungarian Social Democratic Party.

Szamuely was drafted and fought as a soldier during World War I; in 1915, he was captured by Russia. After the Russian October Revolution in 1917, he was released. By then, Szamuely had become interested in communism. In Moscow, he organised a communist group together with Béla Kun among the Hungarian prisoners of war. Many of them, including Szamuely and Kun, joined the Soviet Red Army and fought in the Russian Civil War.

In January 1918, he resided in Moscow, where he worked with Kun to organize Hungarian prisoners of war who supported the Russian Revolution. He was also a member of the Central Committee, responsible for the management of war prisoners. On March 24, he was appointed political deputy of the Communist group of Hungarian war prisoners. Between April 14 and 18, during the sessions, he participated in the meeting of the deputies. From April 3, 1918, he published a communist newspaper, Socialist Revolution, with Béla Kun. Many Hungarian war prisoners refused to join the Russian Red Guard, despite his efforts. Several Hungarian officers were executed in Russia as a result.

Szamuely later went to Germany and in December 1918, he participated in the formation of the Spartacist League, with Karl Liebknecht and Rosa Luxemburg. He returned to Budapest on January 3, 1919. He became a member of the Central Committee of the Hungarian Communist Party and joined the editing of the Red Paper. On February 20, he went into exile but continued his activities in the exiled Central Committee, such as participation in the organisation in the party's paramilitary. [1]

Szamuely was an extremist in his views and his methods. In February 1919, as the communists in Budapest became prepared to rebel against the Social Democrat-Communist coalition government, he wrote in the pages of the Vörös Újság (Red News): "Everywhere counter-revolutionaries run about and swagger; beat them down! Beat their heads where you find them! If counter-revolutionaries were to gain the upper hand for even a single hour, there will be no mercy for any proletarian. Before they stifle the revolution, suffocate them in their own blood!" [2]

On 21 March 1919 a coup by the communist members of the coalition government established the Hungarian Soviet Republic, under the leadership of Béla Kun. Szamuely became a prominent politician of the new government. He occupied a number of posts, but he then was made People's Commissar for Military Affairs. He became a figure of the so-called "Red Terror" of Hungary. Szamuely's guards became nicknamed the "Lenin Boys" or "Lenin Youth". They were an element in the heightened political tension and suppression towards counterrevolutionaries and anti-communists. The Lenin Boys' activities were sometimes aligned with another paramilitary, the Red Guard, led by József Cserny, in which, on an armoured train they travelled the country. [3]

The foundation for the suppression was given as following by Szamuely in a speech delivered in Győr on April 20, 1919: "Power has fallen into our hands. Those who wish the old regime to return, must be hung without mercy. We must bite the throat of such individuals. The victory of the Hungarian Proletariat has not cost us major sacrifices so far. But now the situation demands that blood must flow. We must not be afraid of blood. Blood is steel: it strengthens our hearts, it strengthens the fist of the Proletariat. Blood will make us powerful. Blood will lead us to the true world of the Commune. We will exterminate the entire bourgeoisie if we have to!" [4]

The revolutionary tribunals executed between 370 and 587 of those in custody, [5] and others have placed the number at 590. [6]

In late May 1919, Szamuely travelled to Moscow by aeroplane to campaign for world revolution with Vladimir Lenin. As Szamuely progressed with the revolutionary tribunals, Kun became increasingly uneasy of him, and feared that he was gaining more power than the government. The Social Democrats, who were also members of the Revolutionary Governing Council, pushed for keeping Szamuely and Cserny in check. Therefore, the People's Commissar of Military Affairs at that time, Vilmos Böhm, ordered the dissolution of the paramilitaries and the tribunals at the end of April 1919. Szamuely did not obey, but continued the tribunals' activities in Szolnok in May, then in Abony. He planned to assassinate Böhm, but by August 1919, the Hungarian Soviet Republic had ended after Hungarian-Romanian war, and Szamuely was forced into exile. [7] [8]

The Hungarian Soviet Republic lasted for six months. On 1 August 1919, Kun went into exile as Romanian troops invaded Budapest. Szamuely managed to escape the anticommunist reprisals, known as the "White Terror". He left in his car towards Austria on 2 August 1919, but after making an illegal border crossing, he was arrested by the Austrian authorities. Both Hungarian and Austrian authorities reported that Szamuely had shot himself while the Communist partisan who smuggled him across the border was searched. [9] The wife of Béla Kun wrote in her memoires that Szamuely had told her of his plan to commit suicide if he was captured and had showed her a gun hidden in his clothes. [10] That version of events is not universally accepted, however, and some believe that he had been shot by the border guards.

The Soviet barge carrier MV Tibor Szamueli was named after him. 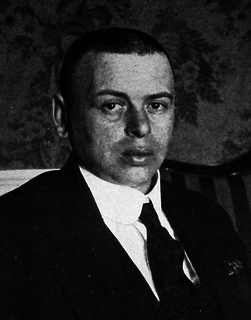 Béla Kun was a Hungarian communist activist and politician who governed the Hungarian Soviet Republic in 1919. After attending Franz Joseph University at Kolozsvár, Kun worked as a journalist before the First World War. He served in the Austro-Hungarian Army and was captured by the Imperial Russian Army in 1916, after which he was sent to a prisoner-of-war camp in the Urals. Kun embraced communist ideas during his time in Russia, and in 1918 he co-founded a Hungarian arm of the Russian Communist Party in Moscow. He befriended Vladimir Lenin and fought for the Bolsheviks in the Russian Civil War. 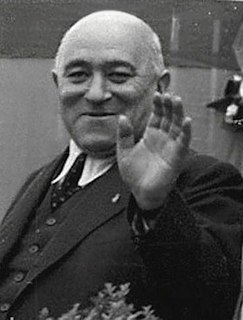 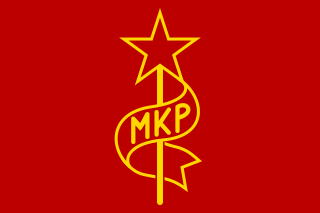 The Hungarian Communist Party, known earlier as the Party of Communists in Hungary, was a communist party in Hungary that existed during the interwar period and briefly after World War II. 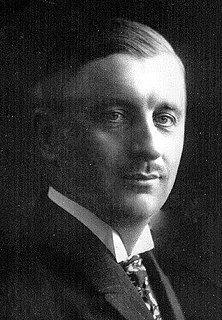 Ferenc Münnich was a Hungarian Communist politician who served as Chairman of the Council of Ministers of the People's Republic of Hungary from 1958 to 1961. 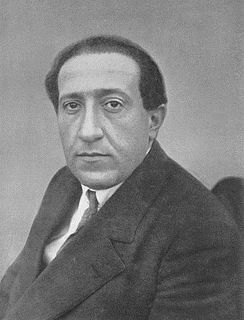 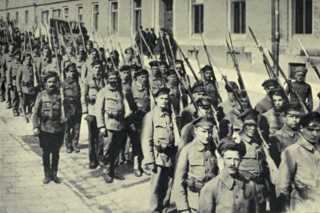 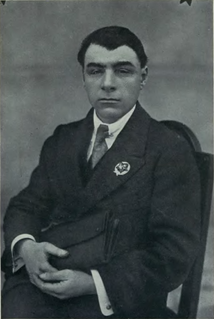 Béla Szántó was a Hungarian Communist politician active participant of the putsch and creation of the Hungarian Soviet Republic in 1919, who later became a critic of the Communist party as led by Béla Kun.

The Lenin Boys were a band of Communist enforcers formed to support the short-lived Hungarian Soviet Republic of 1919. The group consisted of about 200 young men dressed in leather jackets, acting as the personal paramilitary and bodyguard of Tibor Szamuely, Commissar for Military Affairs. Their unit commander was József Cserny. The Lenin Boys were used as an instrument to violently suppress counter-revolutionary movements against the communist government. 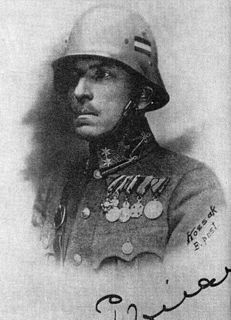 Pál Prónay de Tótpróna et Blatnicza was a Hungarian reactionary and paramilitary commander in the years following the First World War. He is considered to have been the most brutal of the Hungarian National Army officers who led the White Terror that followed Hungary's brief 1919 Communist coup d'état. 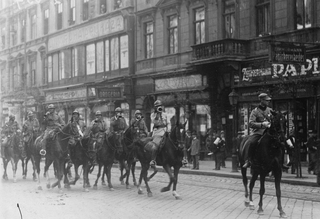 The Hungarian–Romanian War was fought between Hungary and Romania from 13 November 1918 to 3 August 1919. It started as a Romanian military campaign on the eastern parts of the self-disarmed Kingdom of Hungary on 13 November 1918, and it continued against the First Hungarian Republic and from March 1919 against the Hungarian Soviet Republic.

László Rudas was a Hungarian communist newspaper editor and politician who survived the Great Purge in the Soviet Union to become director of the Central Party School of the Communist Party of Hungary. 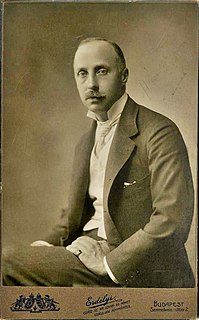 Lajos Návay de Földeák was a Hungarian jurist and politician, who served as Speaker of the House of Representatives between 1911 and 1912. 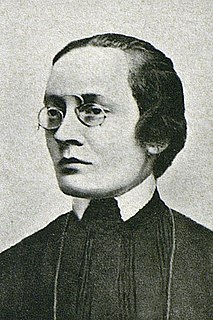 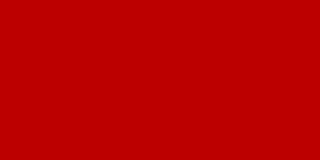 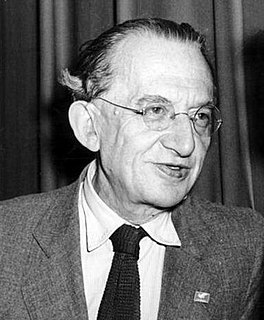 György Lukács was a Hungarian Marxist philosopher, aesthetician, literary historian, and critic of Jewish heritage. He was one of the founders of Western Marxism, an interpretive tradition that departed from the Marxist ideological orthodoxy of the Soviet Union. He developed the theory of reification, and contributed to Marxist theory with developments of Karl Marx's theory of class consciousness. He was also a philosopher of Leninism. He ideologically developed and organised Lenin's pragmatic revolutionary practices into the formal philosophy of vanguard-party revolution.

Alexander Georgiyevich Beloborodov was a Russian Bolshevik revolutionary, Soviet politician, party figure and statesman best known for his role as one of the chief regicides of Nicholas II and his family. 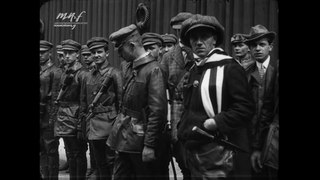 The Red Terror in Hungary was a period of repressive violence and suppression in 1919 during the four-month period of the Hungarian Soviet Republic, primarily towards anti-communist forces, and others deemed "enemies of the state". According to Robin Okey, The communist party and communist policies had considerable popular support among the proletarian masses of large industrial centers - especially in Budapest - where the working class represented a higher ratio of the inhabitants. In the Hungarian countryside, according to John Lukacs, the authority of the government was often nonexistent, serving as a launch-point for anti-communist insurgency. The new government followed the Soviet method: the party established its revolutionary terror groups to "overcome the obstacles" of the "worker's revolution". It received its name in reference to the Red Terror of Soviet Russia. It was soon followed by the White Terror against communists, industrial workers and Jews. 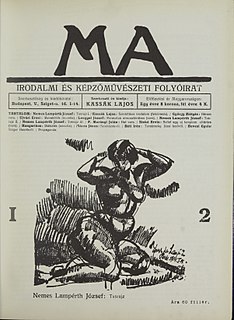 Ma is a Hungarian magazine connected with the Magyar Aktivizmus artistic group whose title not only reflects their initials but also means "today". It was founded in 1916 in Budapest by Lajos Kassák, who continued to publish it in exile in Vienna until 1925.

Jolán Szilágyi, was a Hungarian painter, graphic artist and cartoonist.