Szamuely was born in Moscow, the eldest of three children and elder son of György Szamuely and his wife, Elsa Szanto, both from Hungarian Jewish merchant families. [1] He received his education in England, first at Bertrand Russell's Beacon Hill School in Hampshire, and later at the progressive Summerhill School in Suffolk. Returning to Moscow in the 1930s with his family, he was later evacuated to Tomsk during the Second World War. He served with the Red Army in their occupation of Hungary, but would later return to the Soviet Union to study history at the University of Moscow.

In 1950 he was arrested on espionage charges and spent eighteen months at a lumber camp before being released at the request of Mátyás Rákosi. After his release, he took up academic work in Hungary, becoming vice-rector of the University of Budapest in 1957. After failing to participate in an attack on Georg Lukács, he was, however, dismissed from this post. He left Hungary in 1963 to teach at the Kwame Nkrumah Institute of Economic and Political Sciences (later the Kwame Nkrumah Ideological Institute) in Winneba, Ghana. In 1964, he settled in Britain with his family.

During his time in England, he taught at the University of Reading and contributed frequently to The Spectator , Encounter , The Daily Telegraph and The Sunday Telegraph . He was a close friend of Robert Conquest and Kingsley Amis and was a regular attendee of the lunches at Bertorelli restaurant.

He spent the latter part of his life living in Bayswater. In 1972, Szamuely died of cancer aged 47 in a hospital in London. He is buried at Kensal Green Cemetery, London. [2]

His major study of Soviet history, The Russian Tradition, was edited by Robert Conquest and published posthumously by Secker & Warburg in 1974.

He was the nephew of Tibor Szamuely, a politician during the Hungarian Soviet Republic of 1919. He married Nina Orlova (1923–1974), and was the father of George Szamuely, a journalist who contributes to Russia Today, and of Helen Szamuely, a prominent figure in the founding of the UK Independence Party. [3] 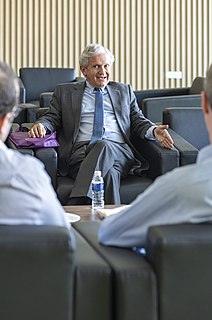 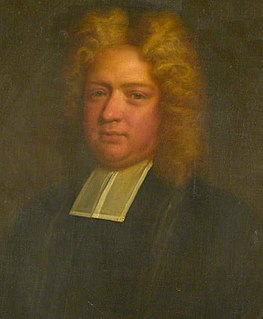 Edward Reynolds Pease was an English writer and a founding member of the Fabian Society.

The House of Burgh or Burke was an ancient Anglo-Norman and later Hiberno-Norman aristocratic dynasty who held the earldoms of Kent, Ulster, Clanricarde, and Mayo at various times, provided one Queen Consort of Scotland, and played a prominent role in the Norman invasion of Ireland.

The Hon. George Lamb was a British politician and writer.

George Szamuely is a senior research fellow at the Global Policy Institute. He was a frequent columnist for the Taki's Top Drawer pages of the New York Press. Szamuely has also written for Antiwar.com, Counterpunch, Commentary, The Observer and the Centre for Research on Globalization. He is a frequent contributor to the RT show CrossTalk.

The British Poet Laureate is an honorary position appointed by the monarch of the United Kingdom, currently on the advice of the prime minister. The role does not entail any specific duties, but there is an expectation that the holder will write verse for significant national occasions. The origins of the laureateship date back to 1616 when a pension was provided to Ben Jonson, but the first official holder of the position was John Dryden, appointed in 1668 by Charles II. On the death of Alfred, Lord Tennyson, who held the post between November 1850 and October 1892, there was a break of four years as a mark of respect; Tennyson's laureate poems "Ode on the Death of the Duke of Wellington" and "The Charge of the Light Brigade" were particularly cherished by the Victorian public. Three poets, Thomas Gray, Samuel Rogers and Walter Scott, turned down the laureateship. The holder of the position as at January 2022 is Simon Armitage who succeeded Carol Ann Duffy in May 2019. 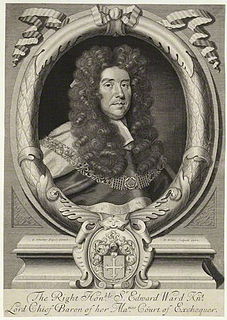 Sir Edward Ward (1638–1714) was an English lawyer and judge. He became chief baron of the exchequer, and is best known as the judge in the state trial for piracy of Captain Kidd.

Founders' Day is a national public holiday observed to commemorate the contributions of all the people, notably the "Big Six" who led the struggle for Ghana's independence. The Founder's Day was formerly called "Founder's Day" with the letter "S" appearing after an apostrophe and it was celebrated to earmark the achievements of Osagyefo Dr. Kwame Nkrumah. Kwame Nkrumah was Ghana's first president and a member of the "Big Six". He was born on 21 September, hence, the "Founder's" Day celebration on 21 September in each year in honour of his participation in the Ghanaian movement for independence from British colonial rule. Other members of the "Big Six" were Edward Akufo-Addo, Joseph Boakye Danquah, Emmanuel Obetsebi-Lamptey, William Ofori Atta, and Ebenezer Ako-Adjei. There were several thoughts and realizations of the leaders of the Present President Akufo Addo's regime that other members of the "Big Six" who were part of the struggles for Ghana's independence must be honour as part of the celebration. The name was changed from "Founder's Day" to "Founders' Day". Meaning that the word is plural to include other member of the "Big Six" as part of Ghana's "Founder's Day" celebration and in honour of them.

Charles Boileau Elliott (1803–1875) was an English travel writer. He published 3 travel diaries in his lifetime. His best known works are Letters from the North of Europe, Travels in the Three Great Empires, and Travels in the Archipelago. All 3 books provide a unique historical account of life in those areas during the mid 1800s just prior to the wars and industrial achievements that would be coming later in the 20th century.

Helen Szamuely was a historian and Eurosceptic who was a researcher for the Bruges Group and founder of the Anti-Federalist League. After the Maastricht Treaty was signed in 1992, she organised monthly meetings at the Red Lion near Parliament to discuss Europe.

Robert Forster was a British Quaker. He was a surveyor, an estate manager and an abolitionist. He took a lifelong interest in education. He was cared for by his younger sister Anne Forster who died three days after him. He had notable brothers as well as sisters Mary Forster and Sarah Forster who were leading Quakers.