Tiburon (Haitian Creole : Tibiwon) is a coastal commune in the Chardonnières Arrondissement, in the Sud department of Haiti. It has 21,170 inhabitants. [2] It is situated in a valley, at the mouth of the Tiburon River. The town of Tiburon lends the whole Southwestern peninsula of Haiti its name. See Tiburon Peninsula

The valley of the Tiburon River, and the town of Tiburon sit exactely on the Enriquillo–Plantain Garden fault. 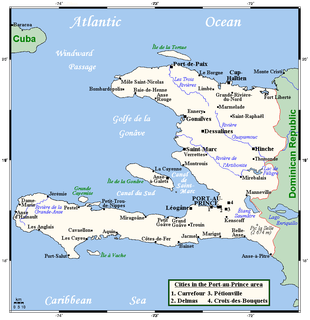 The Republic of Haiti comprises the western three-eighths of the island of Hispaniola, west of the Dominican Republic. Haiti is positioned east of the neighboring island of Cuba, between the Caribbean Sea and the North Atlantic Ocean. Haiti's geographic coordinates are at a longitude of 72° 25′ west and a latitude of 19° 00′ north. 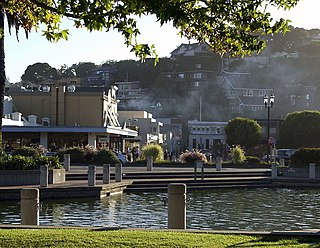 Tiburon is an incorporated town in Marin County, California. It is located on the Tiburon Peninsula, which reaches south into the San Francisco Bay. The smaller city of Belvedere occupies the southwest part of the peninsula and is contiguous with Tiburon. Tiburon is bordered by Corte Madera to the north and Mill Valley to the west, but is otherwise mostly surrounded by the Bay. Besides Belvedere and Tiburon, much of the peninsula is unincorporated, including portions of the north side and the communities of Strawberry and Paradise Cay.

Tiburon may refer to:

State Route 131, named Tiburon Boulevard along its entire length, is a state highway in the U.S. state of California in Marin County. It is a short route that connects U.S. Route 101 with the town of Tiburon.

Hurricane Ella brought flooding to the Greater Antilles and Texas in September 1958. The fifth named storm and third hurricane of the annual season, Ella developed from a tropical wave located just east of the Lesser Antilles on August 30. Initially a tropical depression, it strengthened into Tropical Storm Ella six hours later. The system crossed the Leeward Islands and entered the Caribbean Sea late on August 30. Ella headed westward and by August 31, intensified into a Category 1 hurricane. Hours later, it strengthened into a Category 2 hurricane on the Saffir–Simpson hurricane wind scale. The storm curved northwestward while south of Hispaniola and as a result, struck the Tiburon Peninsula of Haiti on September 1. Flooding in that country killed 30 people in Aux Cayes and left 3 other missing. Additionally, thousands were left homeless, about one-third of crops were washed out, and numerous cattle were killed. 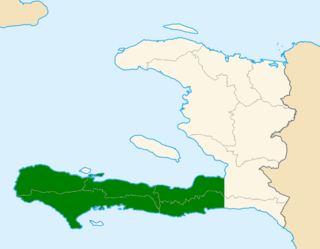 The Tiburon Peninsula, or simply "the Tiburon", is a region of Haiti encompassing most of Haiti's southern coast. It starts roughly at the southernmost point of the Haiti-Dominican Republic border and extends westward near Cuba, forming a large headland. Three of Haiti's ten departments are located entirely within the region. They are the departments of Grand'Anse, Nippes and Sud. A large part of Ouest department is also located in the region, with the capital, Port-au-Prince serving as the line of demarcation between central Haiti and the south. Half of Sud-Est is also located within the Tiburon Peninsula. The mountains on the peninsula are known as the Massif de la Hotte. 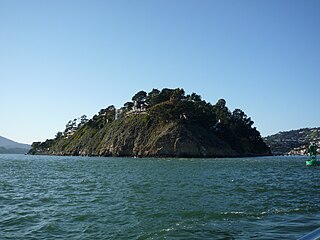 The Raccoon Strait is a waterway of the San Francisco Bay between Angel Island and the Tiburon Peninsula, mainland Marin County, California, United States. During the ice ages, when sea levels were considerably lower and San Francisco Bay was a grassy valley, the combined Sacramento-San Joaquin river flowed through what is now Raccoon Strait before flowing through the canyon at the Golden Gate. 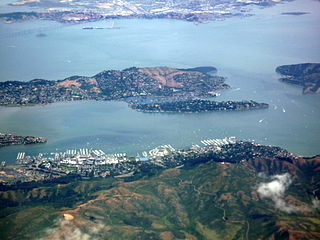 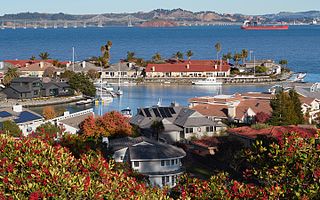 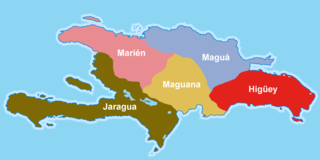 Bohechío is a town in the San Juan province of the Dominican Republic. It is located northeast of the km 25 of Azua – San Juan road at a distance of 26.5 km and 43 km from San Juan Province, 205 km from Santo Domingo and 92 km of the Province Azua, nestled between mountains at the foot of the Cordillera Central. It has a land area of 428.33 km2. 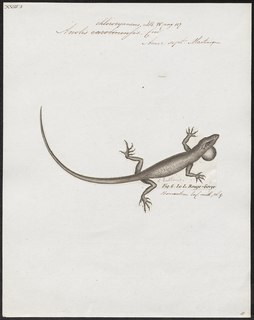 Anolis chlorocyanus, the Tiburon green anole, is a species of anole endemic to Haiti, primarily the Tiburon Peninsula. 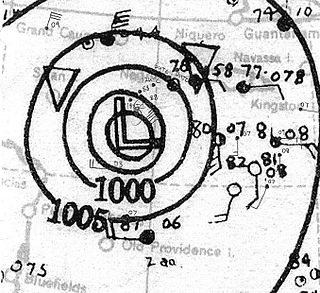 The 1935 Jérémie hurricane, commonly referred to as the 1935 Haiti hurricane, was a highly destructive and catastrophic tropical cyclone that impacted the Greater Antilles and Honduras in October 1935, killing well over 2,000 people. Developing on October 18 over the southwestern Caribbean Sea, the storm proceeded to strike eastern Jamaica and southeastern Cuba while overwhelming southwestern Haiti in a deluge of rain. The hurricane—a Category 1 at its peak—completed an unusual reversal of its path on October 23, heading southwestward toward Central America. Weakened by its interaction with Cuba, the storm soon regained strength and made its final landfall near Cabo Gracias a Dios in Honduras on October 25. The cyclone weakened upon moving inland and dissipated two days later.

Elly Hakami is a former professional tennis player from the U.S. She played from the mid-1980s until 1997. Hakami is from Tiburon, California. She was ranked world No. 32 in 1988.

Chanterelle is a town in the Tiburon commune of the Chardonnières Arrondissement, in the Sud department of Haiti. In 2009, the town had a population of 6,066. 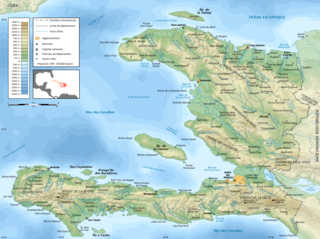 The Petite Rivière de Jacmel is a watercourse running in Haiti through the Sud-Est department and the arrondissement of Jacmel. 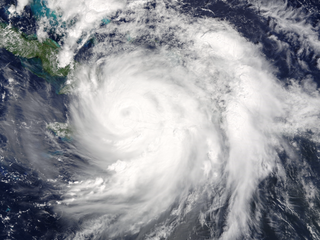 Hispaniola is an island in the Caribbean, with the second largest size throughout all of the Caribbean. Throughout the centuries, since reliable records began, hundreds of hurricanes and tropical cyclones have affected Haiti and the Dominican Republic, the two countries that share the island. The most recent tropical cyclone to affect Hispaniola was Hurricane Grace in August 2021.