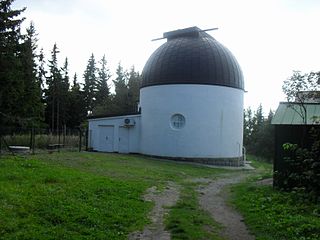 Kleť Observatory is an astronomical observatory in the Czech Republic. It is situated in South Bohemia, south of the summit of Mount Kleť, near the town of České Budějovice. Constructed in 1957, the observatory is at an altitude of 1,070 metres (3,510 ft) and has around 150 clear nights per year.

Miloš Tichý is a Czech astronomer. 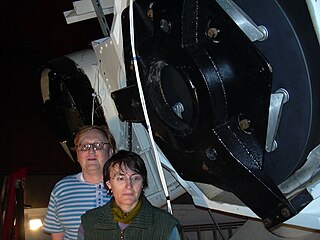 Jana Tichá is a Czech astronomer and discoverer of minor planets. She studied at the University of Economics in Prague and graduated in 1987. In 1992 she was selected for the position of a director of the Kleť Observatory.

Kovač, meaning "blacksmith" in Slavic languages, is a common surname in Croatia, Bosnia-Herzegovina, Slovenia and Serbia. In Slovakia the surname is Kováč.

Čech is a Czech surname meaning Czech. It was used to distinguish an inhabitant of Bohemia from Slovaks, Moravians and other ethnic groups. Notable people with the surname include:

Procházka is a very common Czech surname. The feminine gender is Procházková . A literal translation of the name to English is a stroll.

Hájek is a Czech surname, which means "a person from a grove". Its feminine equivalent is Hájková. The surname may refer to:

Antonin, Antonín, and Antoñín are masculine given names. Antonín, a Czech name in use in the Czech Republic, and Antonin, a French name in use in France, Switzerland, Belgium, Canada, West Greenland, Haiti, French Guiana, Madagascar, Benin, Niger, Burkina Faso, Ivory Coast, Guinea, Senegal, Mauritania, Western Sahara, Morocco, Algeria, Tunisia, Chad, Central African Republic, Cameroon, Equatorial Guinea, Gabon, Republic of the Congo, Democratic Republic of the Congo, Burundi, and Rwanda, are both considered alternate forms of Antonino. Antoñín, a Spanish name in use in Spain, parts of the United States, Mexico, Guatemala, Honduras, El Salvador, Nicaragua, Costa Rica, Western Panama, Colombia, Venezuela, Peru, Ecuador, Bolivia, Chile, Paraguay, Argentina, Uruguay, and the Falkland Islands, is a diminutive form of Antonio. As a surname it is derived from the Antonius root name. Notable people with these names include the following:

6470 Aldrin, provisional designation 1982 RO1, is a stony Flora asteroid from the inner regions of the asteroid belt, approximately 3 kilometers in diameter.

Miloš, Milos, Milosz or spelling variations thereof is a masculine given name and a surname. It may refer to:

Jiří, the Czech name for George, may refer to:

Jindra may refer to:

Vávra is a Czech-language surname. Notable people include:

Ticha may refer to:

Jindra Tichá is a Czech-born academic and writer living in New Zealand. In 2012, she was voted the 11th most influential Czech expatriate by the Czech public.

Zdena Tichá is a Czech rower. She competed in the women's coxless pair event at the 1976 Summer Olympics.