Walter Latter Cornford (25 December 1900 – 6 February 1964) was an English cricketer. He was a wicket-keeper who played in 4 Tests in New Zealand in 1930 and played county cricket for Sussex County Cricket Club. His nickname of Tich alluded to his height of barely five feet. [1]

His county career stretched from 1921 until the outbreak of the Second World War, but he made one further appearance in an emergency at the age of 46 in 1947. [1] 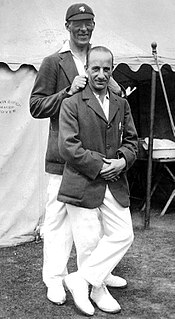 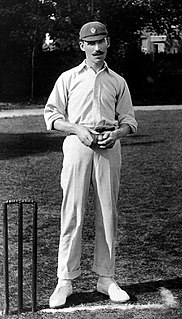 Edward George Dennett was a left arm spinner for Gloucestershire County Cricket Club between 1903 and 1926, and from his figures could be considered one of the best bowlers never to play Test cricket. Owing to the strength of the competition at the time, Dennett was never able to progress even to lower representative levels. He failed even to be nominated as a Wisden Cricketer of the Year, though he would have been a strong candidate to be chosen in 1913. The Wisden Cricketer's Almanack picked John Wisden that year, 29 years after his death, to commemorate the 50th year of its publication.

Tom Richardson was an English cricketer. A fast bowler, Richardson relied to a great extent on the break-back, a relatively long run-up and high arm which allowed him to gain sharp lift on fast pitches even from the full, straight length he always bowled. He played 358 first-class cricket matches including 14 Tests, taking a total of 2,104 wickets. In the four consecutive seasons from 1894 to 1897 he took 1,005 wickets, a figure surpassed over such a period only by the slow bowler Tich Freeman. He took 290 wickets in 1895, again a figure only exceeded by Freeman (twice). In 1963 Neville Cardus selected him as one of his "Six Giants of the Wisden Century". 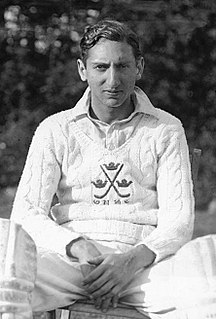 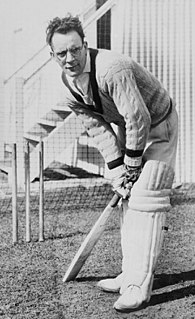 1930 was the 37th season of County Championship cricket in England and will always be remembered for the remarkable batting performances of Australia's Don Bradman. Australia won the Test series 2–1. Lancashire regained the championship to complete four titles in five seasons.

Alan Edward Watt was an English cricketer. A fast-medium bowler and aggressive lower-order batsman, Watt made 230 appearances in first-class cricket; in the most part for Kent County Cricket Club.

Andrew Richard Cornford is a former English cricketer. Cornford was a right-handed batsman who bowled right-arm medium pace. He was born at Crowborough, Sussex.

Tich may refer to:

Cornford is an English surname. It may refer to:

Harold John Hubble was an English professional cricketer who played for Kent County Cricket Club between 1929 and 1931.