Tich Gwilym (10 September 1950 – 19 June 2005), born Robert Gwilliam, was a Welsh rock guitarist who was most notable for his Hendrix inspired version of the Welsh national anthem, Hen Wlad Fy Nhadau , [1] considered one of the most famous renditions of the song. [2]

Tich was born in Llwynypia, in the Rhondda Valley on 10 September 1950. One of Tich's earliest bands was Kimla Taz, who he played with during the late 1960s. Although the band never gained any mainstream success, they were popular in South Wales and in 1969 played at the Croeso '69 Blues Festival at Abergavenny, alongside the likes of Fleetwood Mac and Jethro Tull. [3]

Tich found fame in the 1970s, when as part of Geraint Jarman a'r Cynganeddwyr, he recorded the Welsh national anthem on the electric guitar. The Jimi Hendrix inspired version, which first appeared on Jarman's 1978 album also called Hen Wlad Fy Nhadau, [4] became synonymous with Tich and has appeared on compilation albums of Welsh artists. In 2006, an eight track recording of the Welsh national anthem was 'discovered' in London. [5] At the time it was alleged that this was a lost version by Hendrix, though others claimed that it was a rendition by Tich. [4] When approached, ex-band member Geraint Jarman dismissed both claims, stating that 'It's definitely not Tich because his style was more like Hendrix's than the actual tape'. [4] It was later discovered that the version was a hoax, perpetrated by record producer Martin Davies and ex-guitarist of The Vibrators, John Ellis. [6]

In 1989, Tich formed three-piece band the Superclarks with Burke Shelley of Welsh band Budgie. Burke - later replaced by Peter Morgan - was bass player and lead vocalist. The band lasted until 1993 when Morgan moved to the USA. In the 1990s Tich also played alongside Welsh folk singer Siân James, joining her on a tour of Japan in 1998.

In 2005, Tich was staying in a house in Canton in Cardiff. A fire broke out, after an unattended candle lit by the owner accidentally set clothes alight. [7] Tich became trapped in the attic and was overcome by thick smoke and poisonous gases. An inquest into the fire in 2006 recorded a verdict of accidental death. [7] A memorial concert was held for Tich at the Coal Exchange in Cardiff, and featured Welsh acts such as Man and Racing Cars. [6]

"Hen Wlad Fy Nhadau" is the unofficial national anthem of Wales. The title, taken from the first words of the song, means "Old Land of My Fathers" in Welsh, usually rendered in English as simply "Land of My Fathers". The words were written by Evan James and the tune composed by his son, James James, both residents of Pontypridd, Glamorgan, in January 1856. The earliest written copy survives and is part of the collections of the National Library of Wales.

Wales has a strong and distinctive link with music. Singing is a significant part of Welsh national identity, and the country is traditionally referred to as "the land of song". This is a modern stereotype based on 19th century conceptions of Nonconformist choral music and 20th century male voice choirs, Eisteddfodau and arena singing, such as sporting events, but Wales has a history of music that has been used as a primary form of communication.

Evan James, was a weaver and poet from Pontypridd, originally from Caerphilly, Wales, who wrote the lyrics of Hen Wlad Fy Nhadau, the national anthem of Wales.

This article is about the particular significance of the year 1978 to Wales and its people.

Wales is one of six countries to have competed in every Commonwealth Games since 1930, the others being Australia, Canada, England, New Zealand and Scotland. The Commonwealth Games is the only major sporting event where Wales takes part as a separate entity, apart from the Six Nations Rugby Championship, Rugby World Cup and international association football competitions, as in other events, such as the Olympic Games, they compete under the banner of the United Kingdom.

This article is about the particular significance of the decade 1850–1859 to Wales and its people. 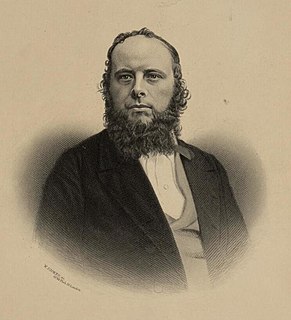 John Owen, also known by his bardic name Owain Alaw Pencerdd, was a Welsh-language poet and also a musician.

Côr Meibion Pontypridd is a male voice choir from the Pontypridd area of the Rhondda Cynon Taf, Wales. It was formed in 1949 as a traditional Welsh singing choir and is based in Pwllgwaun, a suburb of Pontypridd. 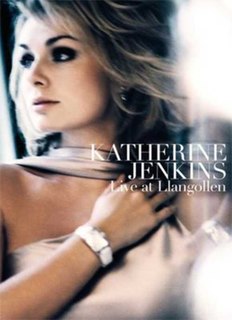 Live at Llangollen is a live concert video by Welsh mezzo-soprano Katherine Jenkins, which was released on DVD on 4 December 2006. The concert was filmed at the Llangollen International Musical Eisteddfod on 9 July 2006.

The national symbols of Wales include a diversity of official and unofficial images and other symbols.

Robert Rees was a Welsh tenor and musician. He was a successful competitor at eisteddfodau for which he adopted the pseudonym Eos Morlais, and in 1867 he won the main prize as a vocalist at the National Eisteddfod of Wales. He was recognised as one of the leading Welsh soloists of his time.

Geraint Jarman is an influential Welsh musician, poet and television producer whose career dates back to the early years of Welsh popular music. He has recorded many albums as a solo artist and with his band Geraint Jarman a'r Cynganeddwyr.

The Welsh National Memorial Park is a war memorial in Langemark near Ypres (Belgium) for soldiers of World War I, located near the Pilkem Ridge in the former Ypres Salient. It commemorates the services of men and women from Welsh origin(Wales), wherever they served during the Great War as part of the Allied Powers, as well as the non-Welsh soldiers serving in Welsh formations.

Ynysangharad War Memorial park is located in the town of Pontypridd, Wales. The area that now makes up the park was bought by the people of Pontypridd in 1919 after workers raised the money to have the park established. It was originally designed for those who lived in the surrounding area to have somewhere to relax from their work lives.

One Britain One Nation (OBON) is a community interest company founded by Kash Singh in 2013. He is a former inspector with the West Yorkshire Police, who also founded the British Indian Association. He moved to Bradford from the Punjab with his parents at the age of six. He won the West Yorkshire Police Oscar, and the Criminal Justice Award for his work in Manningham, Bradford, after the 2001 Bradford riots. He is said to be an associate of Esther McVey and Philip Davies.