Tichborne is a village and civil parish 4 miles (6.4 km) east of Winchester in Hampshire, England.

In archaeology in the south of the parish within the South Downs National Park is a bell barrow, bowl barrow and regular aggregate field system immediately east of Ganderdown Farm, [3] a Scheduled Ancient Monument indicating Bronze Age inhabitation.

In AD 909 Edward the Elder granted the manor of Tichborne to Denewulf, Bishop of Winchester. [4] However, Tichborne is not recorded in the Domesday Book of 1086.

The Roman Catholic Tichborne family has held the manor since the 12th century. Tichborne House was built shortly after 1803 [5] while a longstanding baronetcy (indicating the use of 'Sir') was held by the family. There was a notorious 19th-century legal case of the Tichborne Claimant, in which an English imposter, Arthur Orton, then living in Australia, claimed to be missing Tichborne family member Sir Roger Tichborne.

Almost all of the other buildings are clustered near each other and are listed buildings. [6] They include an Old Rectory [7] which may indicate chancel repair liability, the Chapel of St Margaret. [8] and Tichborne Park House. [9] Near Cheriton is the only Grade II* listed building, Sevington Farmhouse. [10] 1 mile (1.6 km) east of Alresford are a northern small street of cottages, Lady Croft Cottages and Seward's Bridge over the River Itchen and Watercress Line railway.

The Church of England parish church of Saint Andrew has an 11th-century Saxo-Norman chancel that combines characteristically Saxon double-splayed windows with Norman flat buttresses [11] and has reached Grade I listed status. [12] The nave and two-bay arcades are Early English Gothic. [11] The north aisle is now railed off to form the Tichborne Chapel, with monuments to members of the manorial family. [11] It is rare in being dedicated as a Roman Catholic chapel within a pre-Reformation Anglican Parish Church. [13] The west tower was added in 1703 and is built of blue and red brick. [11] It has a ring of six bells cast between 1737 and 1887. [4]

Alresford Golf Course, [14] founded 1890, covers much of the north-east, with greens highly rated on golfing websites. [15]

Nearby attractions include the National Trust garden at Hinton Ampner.

In September is the large agricultural and funfair Alresford Show at Tichborne Park.

New Alresford or simply Alresford is a market town and civil parish in the City of Winchester district of Hampshire, England. It is 7.5 miles (12 km) northeast of Winchester and 12 miles (20 km) southwest of the town of Alton. 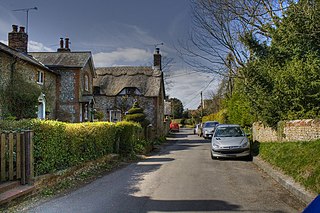 Ropley is a village and large civil parish in the East Hampshire district of Hampshire, England. It has an acreage of 4,684 acres (1,896 ha), situated 4 miles (6.4 km) east from New Alresford, and is served by a station on the Mid Hants Railway heritage line at Ropley Dean, just over 1 mile (1.6 km) from the village shops. It is 6.7 miles (10.8 km) southwest of Alton, just off the A31 road. It lies within the diocese of Winchester.

Alfold is a village and civil parish in Surrey, England on the West Sussex border. Alfold is a dispersed or polyfocal village in the Green Belt, which is buffered from all other settlements. The Greensand Way runs north of the village along the Greensand Ridge and two named localities exist to the north and south of the historic village centre which features pubs, a set of stocks and a whipping post. 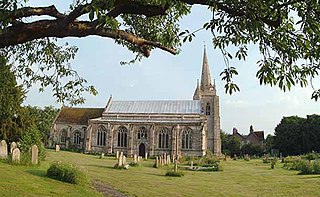 Fleet is a village, civil parish and electoral ward in the South Holland district of Lincolnshire, England. It lies on Delph Bank, 3 miles (4.8 km) south-east from Holbeach. The population of the civil parish, including Fleet Hargate, at the 2011 census was 2136.

Samuel Sanders Teulon was a 19th-century English Gothic Revival architect, noted for his use of polychrome brickwork and the complex planning of his buildings. 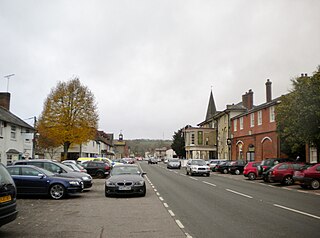 Stockbridge is a small town and civil parish in the Test Valley district of Hampshire, England. It is one of the smallest towns in the United Kingdom with a population of 592 as of the 2011 census. It sits astride the River Test and at the foot of Stockbridge Down.

William White, FSA (1825–1900) was an English architect, noted for his part in 19th century Gothic Revival architecture and church restorations. He was the son of a clergyman and great nephew of the writer and naturalist, Gilbert White of Selborne. 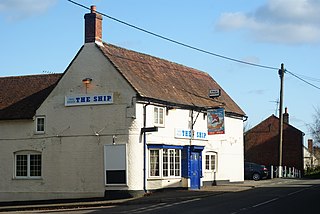 Streat is a village in the Lewes district of East Sussex, England, 3 miles (4.8 km) south-east of Burgess Hill and 5 miles (8.0 km) west of Lewes, within the South Downs National Park.

Benjamin Ferrey, FSA, FRIBA was an English architect who worked mostly in the Gothic Revival. 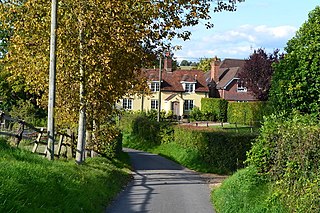 Chilcomb is a small village and civil parish in the English county of Hampshire 3 miles (4.8 km) east of Winchester and includes the South Downs Way long-distance footpath.

Westwell is a small village and civil parish about 2 miles (3 km) southwest of the market town Burford in Oxfordshire. It is the westernmost village in the county, close to the border with Gloucestershire.

Great Haseley is a village and civil parish in South Oxfordshire, England. The village is about 4.5 miles (7 km) southwest of Thame. The parish includes the hamlets of Latchford, Little Haseley and North Weston and the house, chapel and park of Rycote. The parish stretches 6 miles (10 km) along a northeast — southwest axis, bounded by the River Thame in the north, Haseley Brook in the south and partly by a boundary hedge with Little Milton parish in the west. The 2011 Census recorded a parish population of 511.

Norton, Buckland and Stone is a small rural civil parish 1 mile (1.6 km) east of Teynham and 3 miles (4.8 km) west of the centre of Faversham in the borough of Swale, Kent, England. It is bypassed by the M2 to the south and traverses the historic A2, on the route of the Roman road of Watling Street.

Itchen Stoke and Ovington is an English civil parish consisting of two adjoining villages in Hampshire, England, 2 miles (3.2 km) west of Alresford town centre in the valley of the River Itchen, 5 miles (8.0 km) north-east of Winchester, and 2 miles (3.2 km) south-east of Itchen Abbas.