Tichborne is a small village in Central Frontenac Township, located about one hour north of Kingston, Ontario, Canada on Hwy 38. Originally of significance as a stop on the Kingston and Pembroke Railway.

Kingston is a city in Eastern Ontario, Canada. It is on the eastern end of Lake Ontario, at the beginning of the St. Lawrence River and at the mouth of the Cataraqui River. The city is midway between Toronto, Ontario and Montreal, Quebec. The Thousand Islands tourist region is nearby to the east. Kingston is nicknamed the "Limestone City" because of the many heritage buildings constructed using local limestone.

The Kingston and Pembroke Railway (K&P) was a Canadian railway that operated in eastern Ontario. The railway was seen as a business opportunity which would support the lumber and mining industries, as well as the agricultural economy in eastern Ontario.

Central Frontenac is a township in eastern Ontario, Canada in the County of Frontenac.

South Frontenac is a township in Frontenac County in eastern Ontario, Canada. It was amalgamated in 1998 from the former townships of Bedford, Loughborough, Portland, and Storrington.

St. Lawrence College (SLC) is a College of Applied Arts and Technology with three campuses in Eastern Ontario, namely Brockville (1970), Cornwall (1968) and Kingston.

Kingston and the Islands is a federal electoral district in Ontario, Canada, that has been represented in the House of Commons of Canada since 1968.

Kingston was a federal electoral district represented in the House of Commons of Canada from 1867 to 1925 and from 1953 to 1968. It was located in the province of Ontario. It was created by the British North America Act of 1867, and initially consisted of the city of Kingston, Ontario. In 1903, it was expanded to include the village of Portsmouth.

WERQ-FM is a commercial radio station located in Baltimore, Maryland. It features an Urban music format and is known by its listeners as 92Q. It is operated by Radio One of Lanham, Maryland, which operates 53 radio stations in 16 metropolitan areas in the United States and is the largest broadcasting company serving African American audiences in the United States. The WERQ transmitter is located in the Park Heights section of Baltimore, and its studios are located in Woodlawn.

Midland District was one of four districts of the Province of Quebec created in 1788 in the western reaches of the Montreal District and partitioned in 1791 to create the new colony of Upper Canada.

Grinnell Peninsula is a peninsula in northwestern Devon Island in Nunavut, Canada. It was discovered by the First Grinnell Expedition and named "Grinnell Land", after Henry Grinnell, the financier of Arctic explorations.

Calima is a municipality located in the Department of Valle del Cauca, Colombia. Its main urban area is the town of Darién. 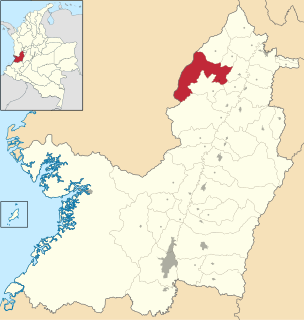 Versalles is a town and municipality located in the Department of Valle del Cauca, Colombia.

Hartington is a small village in South Frontenac Township, located about 14.5 miles north of Kingston, Ontario, Canada on Provincial Route 38. It was formerly a stop on the Kingston and Pembroke Railway. It is notable as being close to the Holleford meteor crater.

Bull Bay is an area located on the southeast coast of Jamaica, 10 miles (16 km) to the east of Kingston on the border between St Andrew and St Thomas, beside Cow Bay. According to folklore, both bays were so named because cattle once roamed the whole area and were slaughtered to provide food for buccaneers and English colonists. Industry in the area includes quarrying for gypsum.

The Buff Bay River is a river of Jamaica. 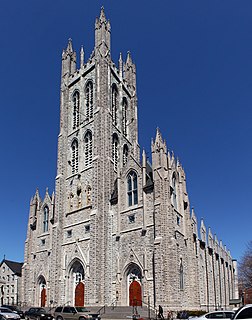 St. Mary's Cathedral in Kingston, Ontario, Canada is a Roman Catholic cathedral. It is one of four churches located within 600m along Clergy Street.

Portsmouth Olympic Harbour is a harbour located in Kingston, Ontario. For the 1976 Summer Olympics in Montreal, it hosted the sailing events.

Lanark—Frontenac—Kingston is a federal electoral district in Eastern Ontario, Canada.

Lanark—Frontenac—Kingston is a provincial electoral district in Ontario, Canada. It elects one member to the Legislative Assembly of Ontario. This riding was created in 2015.