Tichy is a town and commune in Béjaïa Province, northern Algeria.

La Estrella is a town and municipality in Antioquia Department, Colombia. La Estrella is part of The Metropolitan Area of the Aburrá Valley.

German submarine U-63 was a Type IIC U-boat of Nazi Germany's Kriegsmarine that served in the Second World War. She was built by Deutsche Werke AG, Kiel. Ordered on 21 July 1937, she was laid down on 2 January 1939 as yard number 262. She was launched on 6 December 1939 and commissioned on 18 January 1940 under the command of Oberleutnant zur See Günther Lorentz.

Malá Ida is a village and municipality in Košice-okolie District in the Kosice Region of eastern Slovakia.

Harshin is one of the woredas in the Somali Region of Ethiopia. The easternmost woreda of the Jijiga Zone, Harshin is bordered on the south by the Degehabur Zone, on the west by Kebri Beyah, and on the northeast by Somaliland. The major town in Harshin is Harshin.

Hamer is one of the woredas in the Southern Nations, Nationalities, and Peoples' Region of Ethiopia. It is named after Hamer people who live in this woreda. Part of the Debub Omo Zone, Hamer is bordered to the south by Kenya, to the southwest by Kuraz, to the west by Nyangatom, to the north by Bena Tsemay, and to the east by the Oromia Region; the Weito River separates it from the Oromia Region. Hamer includes part of Lake Chew Bahir along its southeastern border. The administrative center is Dimeka; other towns in include Turmi. Hamer was part of former Hamer Bena woreda. 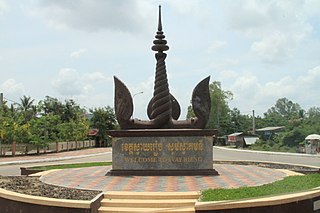 Svay Rieng Municipality is a municipality located in Svay Rieng Province, Cambodia. It surrounds the provincial capital city of Svay Rieng. According to the 1998 census of Cambodia, it had a population of 21,205.

Samir de los Caños is a municipality in the province of Zamora, Castile and León, Spain. According to the 2004 census (INE), the municipality has a population of 227 inhabitants.

Quỳnh Lưu is a rural district of Nghệ An Province, in the North Central Coast region of Vietnam. As of 2003 the district had a population of 353,650. The district covers an area of 609 km2. The district capital lies at Cầu Giát.

Thạch Thành is a district (huyện) of Thanh Hóa Province in the North Central Coast region of Vietnam.

Kobogo is a village in the Bondigui Department of Bougouriba Province in south-western Burkina Faso. The village has a population of 429.

Ciechrz is a village in the administrative district of Gmina Strzelno, within Mogilno County, Kuyavian-Pomeranian Voivodeship, in north-central Poland. It lies approximately 5 kilometres (3 mi) north of Strzelno, 15 km (9 mi) east of Mogilno, 51 km (32 mi) south-west of Toruń, and 52 km (32 mi) south of Bydgoszcz.

Belgian Airman was a 6,959-ton cargo ship which was built by Harland & Wolff Ltd, Glasgow in 1941 for the Ministry of War Transport (MoWT). She was launched as Empire Ballantyne and transferred to the Belgian Government in 1942. She was sunk by a German U-boat on 14 April 1945.

Karpin is a village in the administrative district of Gmina Drawno, within Choszczno County, West Pomeranian Voivodeship, in north-western Poland. It lies approximately 8 kilometres (5 mi) south-west of Drawno, 18 km (11 mi) east of Choszczno, and 78 km (48 mi) east of the regional capital Szczecin. 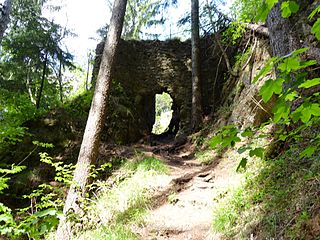 Erebus Glacier is a glacier draining the lower southern slopes of Mount Erebus, Ross Island, Antarctica. It flows west to Erebus Bay where it forms the floating Erebus Glacier Tongue. It was named in association with Mount Erebus by the British National Antarctic Expedition, 1901–04, under Robert Falcon Scott.

Trešnjevica is a village in the municipality of Arilje, Serbia. According to the 2011 census, the village has a population of 826 people.

Kalmani is a village in Belgaum district in Karnataka, India.

Atyashevo is the name of several inhabited localities in Russia.