In 1961, the initial project, which foresaw the construction of a bar along the southern edge of the pool, was never realized. [2]

The current facility was completed in 1966. To architect Alves Costa, the structure was an attempt at integration at the site, that created an artificial world within the natural landscape, as if the artificial was normal to nature. [2]

But, by 2004, the facilities were in a complete state of ruin and abandoned by the local public. [2] It was in early 2004 (5 February) that a dispatch was issued to open the process to classify the site. [2]

The facility is situated on the rocky outcrops in a linear form, paralleling the Avenida da Liberdade and ocean, framed by the landscape. [2]

The saltwater pool, has an irregular, rectangular plan, constructed over the outcrops and structured along the linear wall that delimits the beach. [2] Access to the structure is conditioned by a route framed by raw cement, along which there are orthogonal and linear views that induce the view to look at focal points of the landscape. [2] Below the walls are various support structures. [2]

Porto or Oporto, is the second-largest city in Portugal and one of the Iberian Peninsula's major urban areas. Porto city is small compared to its metropolitan area, with a population of 237,559 people. Porto's metropolitan area has an estimated 1.7 million people (2019) in an area of 2,395 km2 (925 sq mi),, making it the second-largest urban area in Portugal. It is recognized as a gamma-level global city by the Globalization and World Cities (GaWC) Study Group, the only Portuguese city besides Lisbon to be recognised as a global city.

Álvaro Joaquim de Melo Siza Vieira, GOSE, GCIH, GCIP, is a Portuguese architect, and architectural educator. He is internationally known as Álvaro Siza and in Portugal as Siza Vieira.

Leça da Palmeira is a former civil parish in the municipality of Matosinhos in the Greater Porto area, Portugal. In 2013, the parish merged into the new parish Matosinhos e Leça da Palmeira. It has 5.97 km² and had 17.215 inhabitants in the 2001 census.

António Manuel Frasco Vieira, known as Frasco, is a Portuguese former footballer who played as an attacking midfielder. 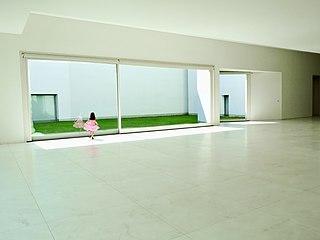 Serralves is a cultural institution located in Porto, Portugal, and one of the most important institutions worldwide, raking in the top 100 most visited museums in the world. It includes a Contemporary Art Museum, a Park and a Villa, each one an example of contemporary architecture, Modernism, and Art Deco architecture. The Museum, designed by Álvaro Siza Vieira, is now the second most visited museum in Portugal and one of the most relevant in the contemporary art circuit in Europe.

Eduardo Elísio Machado Souto de Moura, better known as Eduardo Souto de Moura, is a Portuguese architect who was the recipient of the Pritzker Architecture Prize in 2011 and the Wolf Prize in Arts in 2013. Along with Fernando Távora and Álvaro Siza, he is one of the alumni of the Porto School of Architecture, where he was appointed a Professor.

The Castle of Dona Chica is a neo-romantic castle and/or residence located in the civil parish of Palmeira, municipality of Braga, in the northern region of Portugal. Originally designed by Ernesto Korrodi, the project suffered from a lack of funds early, eventually changing hands and falling into the possession of creditors. 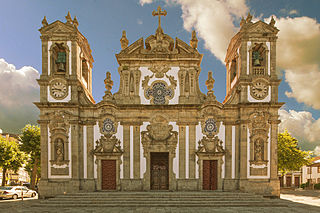 Matosinhos is a city and a municipality in the northern Porto district of Portugal, bordered in the south by the city of Porto. The population in 2011 was 175,478, and covered an area of approximately 62.42 square kilometres (24.10 sq mi). The urban centre, the city proper, had a population of 45,703 in 2001. 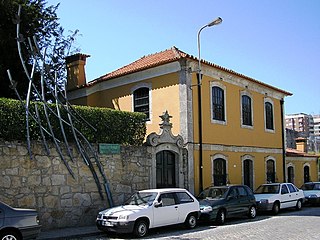 The Residence of Águas Férreas is a residence in the civil parish of Cedofeita, Santo Ildefonso, Sé, Miragaia, São Nicolau e Vitória, in the municipality of Porto, in the Portuguese district of Porto.

The Museum-Residence of Guerra Junqueiro is a former-residence and museum located in the civil parish of Cedofeita, Santo Ildefonso, Sé, Miragaia, São Nicolau e Vitória, in the Portuguese north, municipality of Porto, classified as a Imóvel de Interesse Público.

The Casa da Câmara is a former-administrative building located in the civil parish of Cedofeita, Santo Ildefonso, Sé, Miragaia, São Nicolau e Vitória, in the municipality of Porto, in northern Portugal. 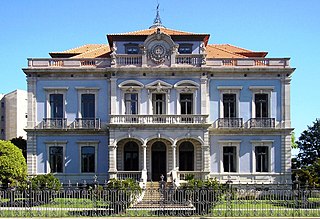 The College of the Marists is a former-college in the civil parish of Lordelo do Ouro e Massarelos, in the municipality of Porto, in the Portuguese district of the same name.

The Hotel Palace of Vidago, is a hotel located in the civil parish of Vidago, Arcossó, Selhariz e Vilarinho das Paranheiras, in the municipality of Chaves, Portuguese district of Vila Real. 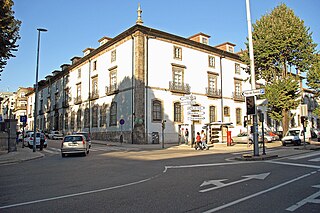 The Convent of Santo António da Cidade is a former-convent and public library in the civil parish of Bonfim, in the municipality of Porto, in the Portuguese district of the same name.

The Castro of Monte Castelo is a Calcolithic fortified settlement, situated in the civil parish of Custóias, Leça do Balio e Guifões, in the municipality of Matosinhos in the northern Portuguese district of Porto.