Tide Mills is a derelict village in East Sussex, England. It lies about two kilometres (1.2 miles) south-east of Newhaven and four kilometres (2.5 miles) north-west of Seaford and is near both Bishopstone and East Blatchington. The village was condemned as unfit for habitation in 1936 and abandoned in 1939.

Thomas Pelham, the politician and prime minister who also held the title Duke of Newcastle, owned land at Bishopstone, and obtained an Act of Parliament which allowed him to use the foreshore of this land for the site of a tide mill. [1] Construction began in 1761, [2] but Pelham died in 1768, and it was not completed until 1788. Three years later, it was advertised for sale in the Sussex Weekly Advertiser , and at the time contained five pairs of mill stones, which could produce 130 quarters (1.65 tonnes) of wheat each week. The exposed location was often a problem, and in 1792 large quantities of flour and wheat were destroyed when the site was hit by a violent storm. [1]

Thomas Barton bought the mill site, and embarked on a series of improvements to make the mill more efficient. He constructed a new three-storey mill building, to house 16 pairs of stones, with which he was able to produce 1,500 sacks (190 tonnes) of flour per week. Ownership changed as a series of partnerships were created and then dissolved. Barton was in partnership with Edmund Catt just prior to 1800, but the London Gazette in 1801 announced that the agreement was no longer in place. Catt then entered into an agreement with his cousin William Catt (1770–1853), but William dissolved this in 1807. William Catt was part of a family who had many farming and milling interests in Robertsbridge and Buxted, and was a keen businessman. He managed the mill well, and it became very profitable, despite the occasional storm damage, such as that in 1820 which damaged the mill building, and washed away some of the mill dam. [3]

According to the census data from 1851, there were 60 men working at the mill, and most of them lived in cottages which Catt had built around the site. He also built a school to educate the children, and although the conditions were rather rudimentary, a thriving community developed. The workers appreciated the facilities provided for their families, at a time when such provision was not common. After the railway line from Newhaven to Seaford was opened, a siding was constructed, which ran between the cottages, enabling large quantities of flour to be transported to Newhaven, from where much of it was shipped to London by sea. [4]

The Mill closed in 1883 and was used as bonded warehouses until it was pulled down in 1901. The village was condemned as unfit for habitation in 1936, with the last residents forcibly removed in 1939. [5] The area was in part cleared to give fields of fire and also used for street fighting training. The site was not used for target practice by Newhaven Fort Artillery, though this story is common locally. The area accommodated vast numbers of Canadian troops during the Second World War.

There are the remains of a station [6] [7] on the Newhaven to Seaford line at grid reference TQ460003 . It started life as either Bishopstone Station (the Victorian OS map of 1874 shows it as this together with a short branch line to the mills) [8] or Tide Mills Halt, but became Bishopstone Beach Halt in 1939 before its closure in 1942. This is different from today's Bishopstone railway station at grid reference TV469998 .

The Sussex Archaeological Society [9] started a long-term project in April 2006 to record the entire East Beach site: Mills, Railway Station, Nurses Home, Hospital, RNAS Station and the later holiday homes and the Marconi Radio station (1904). Apart from the dig, it will evolve into a large collection of film, video, recollections and photographs logging the decline of the area.

Old photographs and paintings, together with a poem, show that the Tide Mill complex included a windmill. [10]

Access is via either Mill Drove, an insignificant single-track road that runs south-west from the Newhaven and Seaford roads at approximately the point where one changes into the other grid reference TQ463005 (very limited parking, and access is via a pedestrian railway crossing at Bishopstone Beach Halt); or along the beach to the east of Newhaven Harbour. Network Rail plans to build a new footbridge across the railway to replace the existing crossing. [11]

The Tide Mills features in the 2007 novel A Kind of Vanishing [12] by crime-writer Lesley Thomson. Two girls are playing hide-and-seek in the summer of 1968. Eleanor is hiding from Alice, who never comes looking for her. Alice disappears and more than thirty years later she is still missing. Much of the "action" takes place around the Tide Mills. The cover photograph for the UK edition published by Myriad Editions shows a shot of the Tide Mills.

It also features in a novel of 2018. Set in 1963-4 Change at Tide Mills [13] uses a version of the Mill and village that is still standing. In practice it was demolished in 1940. A family from London revitalises the Mill's fortunes and the main storylines use local landmarks and contemporary values. The Author also offers a talk using contemporary images to flesh out the actual site and surroundings.

In 2020, LYT Productions launched a community arts and heritage project exploring the history of Tide Mills. [14] The project is being jointly funded by the National Lottery Heritage Fund, South Downs National Park Authority, Arts Council England, LYT Productions and other local organisations. The project is working to research the social history of Tide Mills to share with a wider audience, as well as creating online learning resources [15] and hosting a Heritage Celebration Week in September 2021. [16]

The Ouse is a 35 mile long river in the English counties of West and East Sussex. It rises near Lower Beeding in West Sussex, and flows eastwards and then southwards to reach the sea at Newhaven. It skirts Haywards Heath and passes through Lewes. It forms the main spine of an extensive network of smaller streams, of which the River Uck is the main tributary. As it nears the coast it passes through the Lewes and Laughton Levels, an area of flat, low-lying land that borders the river and another tributary, the Glynde Reach. It was a large tidal inlet at the time of the Domesday book in 1086, but over the following centuries, some attempts were made to reclaim some of the valley floor for agriculture, by building embankments, but the drainage was hampered by the buildup of a large shingle bar which formed across the mouth of the river by longshore drift.

Seaford is a town in East Sussex, England, east of Newhaven and west of Eastbourne.

Newhaven is a port town in East Sussex in England, with regular passenger services to Dieppe.

Rodmell is a small village and civil parish in the Lewes District of East Sussex, England. It is located three miles (4.8 km) south-west of Lewes, on the Lewes to Newhaven road and six and a half miles from the City of Brighton & Hove and is situated by the west banks of the River Ouse. The village is served by Southease railway station, opened in 1906. The Prime Meridian passes just to the west of the village.

The Sussex Archaeological Society, founded in 1846, is one of the oldest county-based archaeological societies in the UK. A registered self-funding charity whose charitable aims are to enable people to enjoy, learn about and have access to the heritage of Sussex. This is done by opening six historic sites in Sussex to visitors, providing research facilities in its library, running excavations, providing a finds identification service and offering a variety of walks, talks and conferences on the archaeology and history of Sussex. Its headquarters are at Bull House, High Street, Lewes, Sussex. The current chief executive of the society is Andrew Edwards.

Isfield is a small village and civil parish in the Wealden District of East Sussex in England, located north-east of Lewes.

Hassocks is a large village and civil parish in the Mid Sussex District of West Sussex, England. Its name is believed to derive from the tufts of grass found in the surrounding fields. 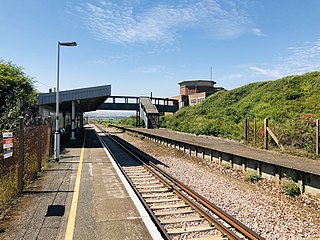 Bishopstone railway station is on the western side of the town of Seaford, East Sussex, England. It is situated close to the coast, and about 1 mile (1.6 km) from the downland rural village of Bishopstone after which it is named. Train services from the station are provided by Southern, and the station is on the Seaford Branch of the East Coastway Line, 58 miles 3 chains (93.4 km) measured from London Bridge. 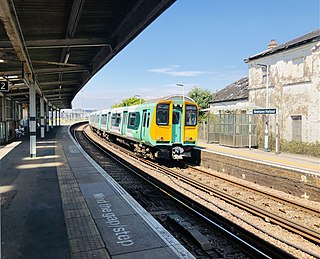 The Vanguard Way is a long-distance walk of 66.2 mi (106.5 km) from East Croydon station in outer London, travelling from the north, to Newhaven, on the south coast of England. It passes through the counties of Surrey, Kent and East Sussex, between Croydon and Newhaven, East Sussex. It connects the London suburbs to the south coast, via the North Downs, Ashdown Forest, South Downs National Park and the Cuckmere valley.

The ruins of the Chailey Heritage Marine Hospital stand to the seaward side of Tide Mills, east of Newhaven, Sussex, in England. 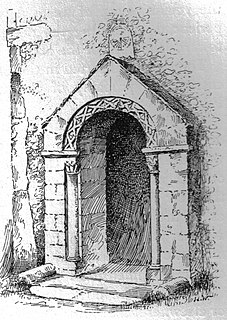 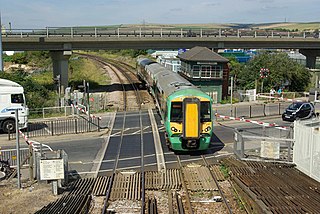 The Seaford branch line is a rural railway line in East Sussex constructed in 1864 primarily to serve the port of Newhaven and the town of Seaford. It now sees fairly regular trains across the line except for the branch to the closed Newhaven Marine station.

The River Bourne rises in the parish of Ightham, Kent and flows in a generally south easterly direction through the parishes of Borough Green, Platt, Plaxtol, West Peckham, Hadlow, and East Peckham where it joins the River Medway. In the 18th century the river was known as the Busty or Buster, the Shode or Sheet, but is not known by these names nowadays. A bourne is a type of stream, while shode means a branch of a river.

The Medway and its tributaries and sub-tributaries have been used for over 1,150 years as a source of power. There are over two hundred sites where the use of water power is known. These uses included corn milling, fulling, paper making, iron smelting, pumping water, making gunpowder, vegetable oil extraction, and electricity generation. Today, there is just one watermill working for trade. Those that remain have mostly been converted. Such conversions include a garage, dwellings, restaurants, museums and a wedding venue. Some watermills are mere derelict shells, lower walls or lesser remains. Of the majority, there is nothing to be seen. 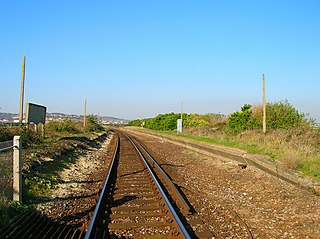 Bishopstone Beach Halt was a railway station in East Sussex, England that was opened on 1 June 1864 and closed on 1 January 1942. The station was built on the Seaford Branch Line for residents of the Bishopstone and Tide Mills villages and located on the west side of Mill Drove. The company that operated the trains on opening was the London Brighton & South Coast Railway, later merged into the Southern Railway.

The Town Mill is a Grade II listed 18th Century watermill located in the centre of Guildford on the River Wey.

Many watermills lined the banks of the River Wey, England, from the 17th century due to the river's ability to provide a reliable, year-round flow of water. These mills chiefly ground wheat, often referred to as corn, for flour and oats for animal feed though many were used in the production of other goods such as paper, cloth, leather, wire and gunpowder. The river was home to more mills per mile than anywhere else in Great Britain. The mill situated at Coxes Lock near Addlestone, Surrey, is the largest. There are many mills on the river's principal tributaries, such as the Tillingbourne, the Ock and some mills on the Whitmore Vale stream, Cranleigh Waters and Hodge Brook. The last commercial mill on the Tillingbourne, Botting's Mill at Albury, closed in 1991. Headley Water Mill, on the Wey South branch is still in business. Town Mill, Guildford still has a water turbine driven generator producing electricity for the town.