Tidriku (also known as Tiidriki and Tiidrigi) is an uninhabited village in Haljala Parish, Lääne-Viru County, in northern Estonia. 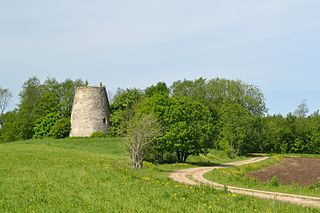 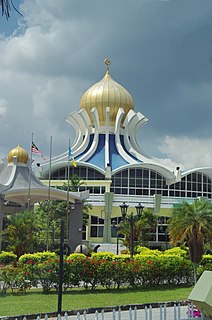 Suchograd is a village and municipality in Malacky District in the Bratislava Region of western Slovakia close to the town of Malacky, north-west of Slovakia's capital Bratislava.

Lipníky is a village and municipality in Prešov District in the Prešov Region of eastern Slovakia.

Kandal Stueng District is a district (srok) of Kandal Province, Cambodia. The district is subdivided into 23 communes (khum) and 154 villages (phum).

Mount Defiance is an 853 ft (260 m) high hill on the New York side of Lake Champlain, in the northeastern United States. It is notable in that the hill militarily dominates both Fort Ticonderoga and Mount Independence, but it was deemed inaccessible so never fortified. Mount Defiance was previously known as Sugar Loaf.

Dąbrowa is a village in the administrative district of Gmina Sokołów Podlaski, within Sokołów County, Masovian Voivodeship, in east-central Poland. It lies approximately 10 kilometres (6 mi) west of Sokołów Podlaski and 79 km (49 mi) east of Warsaw. 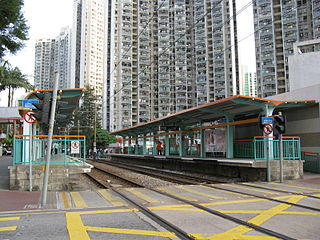 Kin Sang is an at-grade MTR Light Rail stop located at Leung Wan Street in Tuen Mun District, near Kin Sang Shopping Centre in Kin Sang Estate. It began service on 23 September 1988 and belongs to Zone 3. It serves the Kin Sang Estate and nearby residential buildings.

Rudziniec is a village in Gliwice County, Silesian Voivodeship, in southern Poland. It is the seat of the gmina called Gmina Rudziniec. It lies approximately 21 kilometres (13 mi) north-west of Gliwice and 44 km (27 mi) west of the regional capital Katowice.

Gordejki Małe is a village in the administrative district of Gmina Olecko, within Olecko County, Warmian-Masurian Voivodeship, in northern Poland.

Rencheng is one of two districts and the seat of the city of Jining in Shandong province, China. In November 2013 Shizhong District was merged into Rencheng.

Lärchwand is a mountain of Bavaria, Germany. It was an exclave of Luxembourg before 1869.

Imperial is an administrative neighborhood (barrio) of Madrid belonging to the district of Arganzuela. It is 0.967500 km² in size.

Gelibolu War Museum is a museum in Gelibolu, Turkey.