Tidye Pickett [1] (November 3, 1914 – November 17, 1986) [2] was an American track and field athlete. She represented the United States in the 80-meter hurdles at the 1936 Summer Olympics in Berlin, becoming the first African-American woman to compete in the Olympic Games. In 2016, the 1936 Olympic journey of the eighteen Black American athletes, including interviews with Pickett's family, was documented in the film Olympic Pride, American Prejudice . [3]

Tidye Pickett was born in Chicago, Illinois, on November 3, 1914. [2] Her mother was Sarah Pickett, a factory clerk, and Louis Pickett, a foundry foreman. [4] She grew up in Englewood, a Chicago neighborhood. [5]

She took up running as a schoolgirl; after competing in some local meets she caught the attention of long jumper John Brooks, who began to coach her. [5] At the 1932 United States Olympic Trials Pickett competed in the 100-meter dash, winning her heat and placing third in her semi-final; she qualified for the final, where she placed sixth. [6] : 77  [7] : 183–184  Pickett was named to the American Olympic team as part of the eight-woman 4 × 100 meter relay pool; she and Louise Stokes, who was also part of the relay pool, were the first African-American women to be selected for the Olympic Games, [8] but both of them were left out of the final four-woman relay lineup that ran at the Olympics. [9] [10] Pickett and Stokes suffered racial discrimination during their Olympic trip; [8] whether racism also played a role in their omission from the Olympic relay is disputed and unclear. [9] [10]

Pickett continued her running career; in 1934 she ran the opening leg on a Chicago Park District team that set an unofficial world record of 48.6 in the 4 × 110 yard relay. [11] : 294  At the 1936 United States Olympic Trials she competed in the 80-meter hurdles, placing second and qualifying for the Olympics in Berlin. [6] : 86  At the Olympics, Pickett survived the heats but went out in the semi-finals, falling at the second hurdle and injuring herself; [7] : 227  [6] : 86  she was the first African-American woman, as well as the first Illinois State University athlete, to compete in the Olympic Games. [6] : 86  [12]

Pickett later became a schoolteacher, serving as principal at an elementary school in East Chicago Heights until her retirement in 1980; when she retired, the school was renamed after her. [8] She died in Chicago Heights, Illinois, on November 17, 1986. [2] 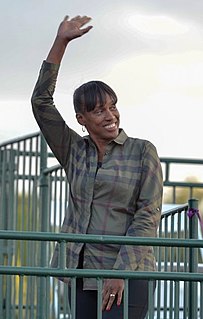 Jacqueline Joyner-Kersee is a retired American track and field athlete, ranked among the all-time greatest athletes in the heptathlon as well as long jump. She won three gold, one silver, and two bronze Olympic medals in those two events at four different Olympic Games. Sports Illustrated for Women magazine voted Joyner-Kersee the Greatest Female Athlete of All-Time. She is on the Board of Directors for USA Track & Field (U.S.A.T.F.), the national governing body of the sport.

Tonja Yvette Buford-Bailey is an American former athlete who competed mainly in the 400 meter hurdles. She competed as Tonja Buford until marrying Victor Bailey on October 28, 1995. In 1982, when she was 12 years old, she met former track runner Wilma Rudolph. She attended Meadowdale High School in Dayton and the University of Illinois.

Jamaica sent a delegation to compete at the 2008 Summer Olympics, held in Beijing, China from August 8 to August 24, 2008. This was, by far, Jamaica's best showing at the Summer Olympics; it was the nation's largest delegation yet, and its athletes nearly doubled its total gold medal count in addition to breaking the nation's record for number of medals earned in a single games. Jamaica's appearance at Beijing was its fifteenth consecutive appearance and appearance as an independent nation, although it had previously participated in four other games as a British colony and as part of the West Indies Federation. In the 29 events that included Jamaican athletes, there were 26 cases in which a Jamaican athlete or relay progressed to a final round. Usain Bolt won three of Jamaica's six gold medals at Beijing, breaking an Olympic and world record in all three of the events in which he participated. Shelly-Ann Fraser led an unprecedented Jamaican sweep of the medals in the Women's 100 m. Female sprinter Veronica Campbell-Brown carried Jamaica's flag at the ceremonies.

Esther Stroy is a former American track and field athlete, who competed in the sprinting events. She is best known for competing at the 1968 Olympics in the 400-meter dash as a 15-year-old, the youngest competitor at those games. 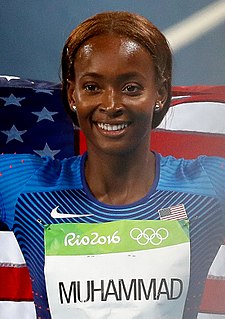 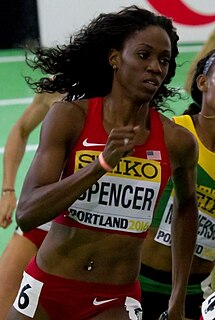 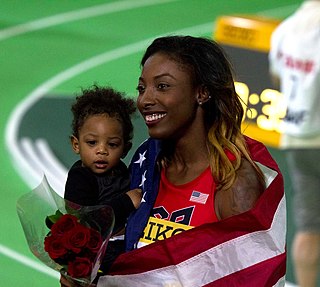 Floyd George Smart was an American track and field athlete. Smart was United States champion in the 440 yd hurdles in 1917 and 1919 and in the long jump in 1919.

Harold William Manning was an American long-distance runner. He held the American record in the men's 3000-meter steeplechase from 1934 to 1952 and briefly held the world best in 1936. He represented the United States in the steeplechase at the 1936 Summer Olympics, placing fifth.

John William Brooks was an American long jumper. He competed in the 1936 Summer Olympics in Berlin, placing seventh in the long jump. 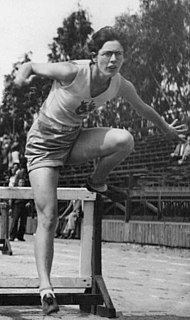 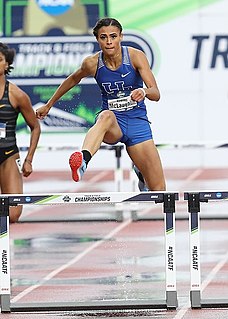 Sydney Michelle McLaughlin is an American hurdler, sprinter, and Olympic gold medalist who competed one year for the University of Kentucky before turning professional in 2018. She is the current world record holder in the women's 400 meters hurdles with a time of 51.46 seconds, set on August 4, 2021, at the Tokyo Olympics in the final run. She was the first woman to break 52 seconds in the event when she set the world record of 51.90 at the 2020 USA Olympic trials.

Barbara Ann Mueller is a retired American track and field athlete. She represented the United States at the 1956 Olympics, running the 80 meters hurdles. Her 11.6 did not get her out of the heats. A versatile athlete, she won the pentathlon at the US National Championships in 1955 and 1956, both times defeating Stella Walsh. While finishing second to Cuban Bertha Diaz, she was National Champion in the hurdles in 1955 as the first American in the race. She won the 1954 National Indoor Championship in the 50 yard hurdles. She also ran hurdles in the 1955 and 1959 Pan American Games.

Anna Cockrell is an American track and field athlete competing in sprinting and hurdling. She is a two-time medalist at the 2019 Pan American Games in Lima, Peru and she represented the United States at the 2020 Summer Olympics in Tokyo, Japan.