Tie Break may refer to:

Die Ärzte is a German punk band from Berlin. The band has released 13 studio albums. The group consists of guitarist Farin Urlaub, drummer Bela B and bass player Rodrigo González. All three write and perform their songs.

Austria has participated in the Eurovision Song Contest 52 times since its debut in 1957. The country has won twice, in 1966 and 2014, and currently holds the record for the longest gap between wins, with 48 years between victories. The contest is broadcast in Austria by ORF. Vienna was the host city on both of the occasions that the contest was held in Austria, in 1967 and 2015.

The 1997 NBA Finals was the concluding series of the 1997 NBA playoffs that determined the champion of the 1996–97 NBA season. The Western Conference champion Utah Jazz took on the Eastern Conference champion Chicago Bulls for the title, with the Bulls holding home court advantage. The series were played under a best-of-seven format, with the first 2 games in Chicago, the next 3 games in Salt Lake City, and the last 2 games in Chicago.

The winner of the Eurovision Song Contest is selected by a positional voting system. The most recent system was implemented in the 2016 contest, and sees each participating country award two sets of 12, 10, 8–1 points to their 10 favourite songs: one set from their professional jury and the other from tele-voting.

"Weil der Mensch zählt" was the Austrian representative in the Eurovision Song Contest 2003, performed by Alf Poier in his native Styrian dialect of German.

"Du bist" was the Austrian entry at the Eurovision Song Contest 2004, performed in German by Tie Break. It was the only song in the Austrian semi-finals of this year to be sung in German. 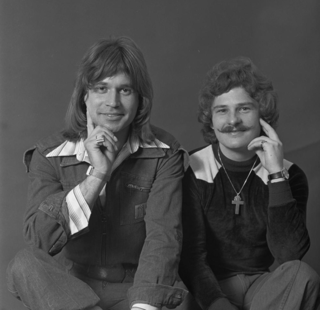 Waterloo & Robinson is an Austrian band, consisting of Johann Kreuzmayr ("Waterloo") and Josef Krassnitzer ("Robinson").
The duo are most famous for representing Austria in the Eurovision Song Contest 1976, performing the song My Little World, where they recorded a 5th-place finish with 80 points. This song was also the first time that Austria had performed entirely in English at the Contest.

The 1906 International Lawn Tennis Challenge was the sixth edition of what is now known as the Davis Cup. As defending champions, the British Isles team played host to the competition. For the first time, the ties were not all played at the same location. The "World Group" ties were played at the Newport Athletic Club in Newport, Monmouthshire, England from 7–9 June, and the final was played at Worple Road in Wimbledon, London, England on 15–18 June. Britain retained the Cup for their fourth championship.

The World Senior Chess Championship is an annual chess tournament established in 1991 by FIDE, the World Chess Federation.

The 1997–98 NBA season was the Bulls' 32nd season in the National Basketball Association. The Bulls entered the season as the two-time defending NBA champions, where they defeated the Utah Jazz in the 1997 NBA Finals in six games, winning their fifth NBA championship. During the offseason, the Bulls acquired Scott Burrell from the Golden State Warriors. Without All-Star forward Scottie Pippen for the first half of the season due to a foot injury sustained from the 1997 NBA Finals, the Bulls played around .500 with a 9–7 record in November. However, Pippen would eventually return as the Bulls posted a 13-game winning streak between March and April, as they finished first place in the Central Division with a 62–20 record. In the playoffs, the Bulls defeated the New Jersey Nets 3–0 in the first round, the Charlotte Hornets 4–1 in the semifinals, and then the Indiana Pacers 4–3 in the Conference Finals en route to advance to the NBA Finals. In the Finals, they met the Utah Jazz in a rematch from last year's NBA Finals and just like last year, they would go on to defeat the Jazz in six games to win the championship. The championship was their sixth in eight years and completed the franchise's second "3-peat".

The 1926 Ice Hockey European Championship was the 11th edition of the ice hockey tournament for European countries associated to the International Ice Hockey Federation. 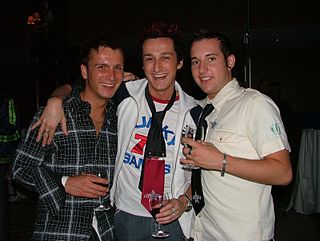 Tie Break is an Austrian boyband.

Tie Break is a successful and "significant" Polish jazz rock group, formed in Częstochowa in 1977. The group was formed by guitarist Janusz Iwański and the bassist Krzysztof Majchrzak, and was soon joined by flute player Grzegorz Chmieleck. The current lineup includes Janusz Iwański, Marcin Pospieszalski, Antoni Gralak and Mateusz Pospieszalski. The group has performed at notable venues such as the Jazz Jamboree.

Janusz Iwański, best known as Yanina, is a Polish jazz and rock guitarist, composer, songwriter and vocalist. He has performed with the groups Tie Break, Soyka Yanina, and Maanam. Since 2007 he has been playing with the rock group, The Goodboys.

"Black Smoke" is a song performed by German singer Ann Sophie. The song represented Germany in the Eurovision Song Contest 2015, receiving zero points. Despite "Heart of Stone" by Andreas Kümmert being the original winner of the selection show Unser Song für Österreich, Kümmert decided to withdraw himself just when he was announced as the winner and therefore Ann Sophie and "Black Smoke" were chosen to represent the country. The song was co-written by British singer Ella Eyre. Black Smoke became the third German entry to get zero points at Eurovision, and the first one since Ulla Wiesner with "Paradies, wo bist du?" in 1965, 50 years ago.

The 2019–20 Austrian Football Bundesliga , also known as Tipico Bundesliga for sponsorship reasons, is the 108th season of top-tier football in Austria. Red Bull Salzburg are the six-times defending champions.