Tie Ying (1916 – February 6, 2009) was a People's Republic of China politician and People's Liberation Army major general. He was born in Nanle County, Henan Province. He was Communist Party of China Committee Secretary of Zhejiang Province (1977) as well as governor of Zhejiang.

The Chinese People's Liberation Army (PLA) is the armed forces of the People's Republic of China (PRC) and its founding and ruling political party, the Communist Party of China (CPC). The PLA consists of five professional service branches: the Ground Force, Navy, Air Force, Rocket Force, and the Strategic Support Force. Units around the country are assigned to one of five Theater commands by geographical location. The PLA is the world's largest military force and constitutes the second largest defence budget in the world. It is one of the fastest modernising military powers in the world and has been termed as a potential military superpower, with significant regional defense and rising global power projection capabilities. China is also the third largest arms exporter in the world.

Nanle County is a county in the north of Henan province, China, bordering the provinces of Hebei and Shandong to the north and east, respectively. It is the northernmost county-level division of Puyang City.

Zhejiang Greentown Football Club is a professional Chinese football club that currently participates in the China League One division under licence from the Chinese Football Association (CFA). The team is based in Hangzhou, Zhejiang and their home stadium is the Hangzhou Huanglong Stadium that has a seating capacity of 52,672. The club's main investor is the Zhejiang-based Greentown China Holdings Limited company, which is owned by real estate tycoon Song Weiping. Greentown became the first sports club from Hangzhou with 1 million followers on Weibo. 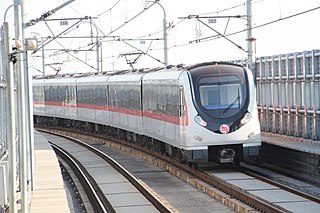 Hangzhou Metro is a metro system that serves the Chinese city of Hangzhou and surrounding suburbs. The system opened on November 24, 2012, with major expansion plans still ongoing, including a connection to neighboring Shaoxing which is building its own metro. It is the 17th city in China to operate a rapid transit system.

Hangzhou Binjiang Hospital, is an affiliated hospital of Zhejiang University for the public.

The Jinhua–Wenzhou railway, also known as the Jinwen line is a railway in Zhejiang Province, China, connecting Jinhua and Wenzhou. It is, in mainland China the first railway with the investment from a joint venture, between Chinese government-owned corporations and privately held companies. The construction of this 252 km long rail line began on December 18, 1992, and it was opened on June 11, 1998. Upon the completion of its construction, all of the share owned by private shareholders has been transferred to state-own corporations. The railway is now under the supervision of CR Shanghai. 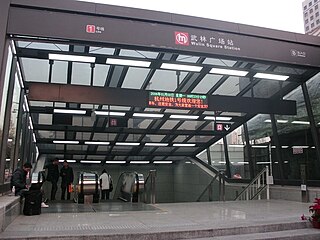 Wulin Square is a station on Line 1 of the Hangzhou Metro in China. It was opened in November 2012, together with the rest of the stations on Line 1. It is located at Wulin Square, in the Xiacheng District of Hangzhou. The station complex is one of the largest in Hangzhou with a platforms that are wider than regular Hangzhou Metro stations and have provision for a paired cross-platform interchange with the proposed Line 3. In addition, the station is connected to a large underground mall.

Line 2 of the Hangzhou Metro is a north-south rapid transit line, connecting the downtown with the districts of Xiaoshan and Yuhang in Hangzhou.

Loong Air is a Chinese airline with its headquarters in the Loong Air Office Building on the property of Hangzhou Xiaoshan International Airport in Xiaoshan District, Hangzhou, Zhejiang. Its main hub is in Hangzhou. Approved by the Civil Aviation Administration of China, it started domestic services in 2013. On 25 September 2013, the airline signed a memorandum of understanding with Airbus for the purchase of 20 Airbus A320 twin-engined aircraft.

Haman Hu, also known as Hua Shao, is a Chinese television host. He is known for being the host of The Voice of China.

Zhao Yide is a Chinese politician. He is the current Deputy Communist Party Secretary of Hebei. Earlier in his career, he served as the party chief of Hangzhou, and the Secretary-General of the Zhejiang Party Committee.

Zhang Qilong was a People's Republic of China politician. He was born in Liuyang, Hunan Province. He joined the Communist Party of China in 1926 and participated in the Autumn Harvest Uprising of 1927. He was a member of the Chinese Workers' and Peasants' Red Army during the Chinese Civil War, the Eighth Route Army and the People's Liberation Army. In 1933, his party membership was revoked and he divorced his then wife, Li Zhen, to avoid implicating her in his disgrace. He was allowed back into the party in 1936. After the creation of the People's Republic of China, he was the first party chief for Heilongjiang Province.

Shen Daren was a Chinese politician from Jiangsu province. He was best known for his terms as the Communist Party Secretary of Ningxia between 1986 and 1989 and party secretary of his home province between 1989 and 1993.

Li Fengping (1912–2008) was a politician of the People's Republic of China. He was born in Tongliang District, Chongqing, which was then part of Sichuan Province. He attended the Central Party School of the Communist Party of China in Yan'an, Shaanxi Province. During the Second Sino-Japanese War, he served in the New Fourth Army. He was governor of Zhejiang from 1979 to 1983 and later Chairman of the Zhejiang People's Congress. He was a delegate to the 5th National People's Congress.

Hangzhou No. 2 High School is a coeducational public secondary school in Hangzhou, Zhejiang, China. It has more than 2,800 students, aged 16 to 18 years. It was founded in 1899 by American Christian missionary W. S. Sweet. The school has gained prestigious reputation in many aspects, often referred to as one of the "three top high schools" in Hangzhou.

The Airport Express line of the Hangzhou Metro, also known as the Central Express line, is a future express line serving Hangzhou, Zhejiang. The line has a length of 57 km (35 mi) and a total of 15 stations. It will connect Hangzhou West railway station, Alibaba headquarters, Hangzhou East railway station and Hangzhou Xiaoshan International Airport, and the termini will be Liuxiang Road station and Jingjiang station. The line is expected to be operational by late 2021. The line will use six car high capacity wide body Type A trains and will cross the Qiantang River on a rebuilt Road–Railway Bridge with the Zhejiang Expressway S2. 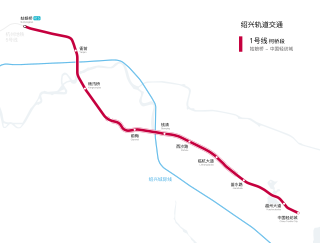 Shaoxing Metro also known as Shaoxing Rail Transit the same name as the operation company is the metro system in Shaoxing, Zhejiang province, China. Line 1 has been under construction since 2016, and is scheduled to open in 2020. In addition Line 1 will through operate into the Hangshao Intercity Railway and connect with Hangzhou Metro Line 5. The network is planned to comprise six lines with a total length of about 208 kilometres (129 mi) by 2030.