Tiede may refer to:

Carthage is a city and the county seat of Panola County, Texas, United States. This city is situated in East Texas, 150 miles southeast of Dallas and near the Louisiana state line. The population was 6,779 at the 2010 census.

Pirate havens are ports or harbors that are a safe place for pirates to repair their vessels, resupply, recruit, spend their plunder, avoid capture, and/or lie in wait for merchant ships to pass by. The areas have governments that are unable or unwilling to enforce maritime laws. This creates favorable conditions for piracy.

Judgment in Berlin is a 1984 book by federal judge Herbert Jay Stern about a hijacking trial in the United States Court for Berlin in 1979, over which he presided.

Events from the year 1975 in Ireland.

Founded in 1899, Sonoco Products Company is a United States-based international provider of diversified consumer packaging, industrial products, protective packaging, and packaging supply chain services and the world's largest producer of composite cans, tubes, and cores. With annualized net sales of approximately $4.9 billion, Sonoco has 19,900 employees in more than 335 operations in 33 countries, serving more than 85 nations. The company is headquartered in Hartsville, South Carolina, and is South Carolina's largest corporation in terms of sales.

In October 1975, Dutch businessman Tiede Herrema was kidnapped by the Provisional IRA in Castletroy, near Limerick. This triggered a large police investigation and a two week siege, after which Herrema was released unharmed.

Herbert Jay Stern is a New Jersey criminal defense lawyer. Earlier in his career, Stern served as a United States District Judge of the United States District Court for the District of New Jersey and the United States Court for Berlin. He presided over a hijacking trial that was the only case ever tried in an American court in the occupied American Sector of West Berlin. He wrote a book about that case, Judgment in Berlin, which became a movie of the same name in which his role was played by Martin Sheen. He was part of the team that successfully handled several major corruption and organized crime trials in New Jersey. These are memorialized in his recent book, Diary of a DA: The True Story of the Prosecutor Who Took On the Mob, Fought Corruption, and Won. (2012)

LOT Polish Airlines Flight 165 hijacking was the hijacking of a LOT Polish Airlines that occurred on 30 August 1978. The hijackers from East Germany (GDR) were seeking political asylum in West Germany (FRG). The plane landed safely, and the primary hijacker was tried and convicted by a West German jury in the specially convened United States Court for Berlin and sentenced to time served, the nine months he had already served during pretrial detention.

VOXEL-MAN is the name of a set of a computer programs for creation and visualization of three-dimensional digital models of the human body derived from cross-sectional images of Computer Tomography, Magnetic Resonance Tomography or photography. It was developed at the University Medical Center Hamburg-Eppendorf. Applications include diagnostic imaging, digital anatomical atlases and surgery simulators. The 3D interactive atlases of anatomy and radiology for brain/skull and inner organs are available for free download. The name Voxel-Man is derived from the term Voxel, the elementary cuboid component of a digital representation of a three-dimensional object. Occasionally the name Voxel-Man is also used as a general term for a digital representation of the human body. 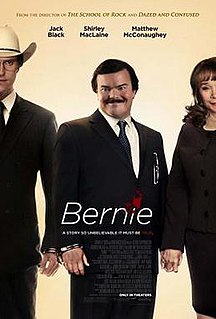 Bernie is a 2011 American Dark comedy film directed by Richard Linklater, written by Linklater and Skip Hollandsworth. The film stars Jack Black, Shirley MacLaine and Matthew McConaughey. It is based on a 1998 Texas Monthly magazine article by Hollandsworth, "Midnight in the Garden of East Texas," that chronicles the 1996 murder of 80-year-old millionairess Marjorie Nugent in Carthage, Texas by her 39-year-old companion, Bernhardt "Bernie" Tiede. Tiede proved so highly regarded in Carthage that, in spite of Tiede's confession to the police, the district attorney was eventually forced to request a rare prosecutorial change of venue in order to get an impartial jury.

Bernhardt "Bernie" Tiede II is an American mortician and convicted murderer. Tiede confessed to the shooting of a wealthy 81-year-old widow, Marjorie "Marge" Nugent, in Carthage, Texas on November 19, 1996. The murder is the subject of the 2011 critically acclaimed film Bernie, directed by Richard Linklater and starring Jack Black as Tiede.

The Barry B. Telford Unit (TO) a.k.a. Telford Unit is a Texas state prison located in unincorporated Bowie County, Texas. The facility, along Texas State Highway 98, is 2 miles (3.2 km) south of Interstate 30. It has a "New Boston, Texas" mailing address, and is in proximity to Texarkana. The Telford Unit is operated by Texas Department of Criminal Justice Correctional Institutions Division, administered within Region II. 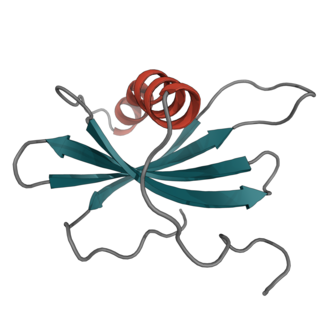 Affimer molecules are small proteins that bind to target molecules with similar specificity and affinity to that of antibodies. These engineered non-antibody binding proteins are designed to mimic the molecular recognition characteristics of monoclonal antibodies in different applications. In addition, these affinity reagents have been optimized to increase their stability, make them tolerant to a range of temperatures and pH, reduce their size, and to increase their expression in E.coli and mammalian cells.

Herbert Tiede was a German actor. He appeared in more than one hundred films from 1943 to 1975.

Päivätär is the goddess of the Sun in Finnish mythology. She owns the silver of the Sun, spins silver yarns, and weaves clothes out of them. In Kalevala, young maidens ask Päivätär to give them some of her silver jewellery and clothes. She is described as a great beauty.

The Minister of Science and Culture is one of the Finnish Government's ministerial positions.