Tiefenbach is a former municipality in the district of Mittweida, in Saxony, Germany. On July 1, 2008 Tiefenbach was incorporated into Striegistal.

The Battle of Wisternitz or Dolní Věstonice was fought on August 5, 1619 between a Moravian force under Friedrich von Tiefenbach (Teuffenbach) and an Austrian army under de:Heinrich von Dampierre. The battle was a Moravian victory. The battle is part of the Thirty Years' War. 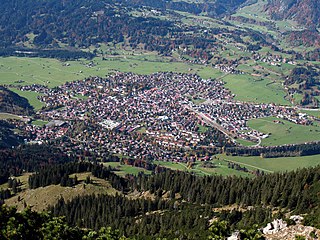 Oberstdorf is a municipality and skiing and hiking town in Germany, located in the Allgäu region of the Bavarian Alps. It is the southernmost settlement in Germany and one of its highest towns. 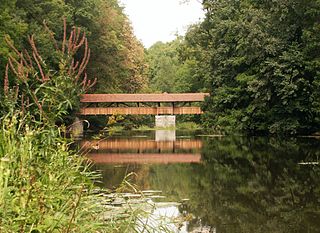 The Jagst is a right tributary of the Neckar in northern Baden-Württemberg. It is 190 km long. Its source is in the hills east of Ellwangen, close to the Bavarian border. It winds through the towns Ellwangen, Crailsheim, Kirchberg an der Jagst, Langenburg, Krautheim, Möckmühl and Neudenau. Near Bad Wimpfen the Jagst flows into the Neckar, a few km downstream from the mouth of the river Kocher, that flows more or less parallel to the Jagst.

Dov Yosef Tiefenbach is a Canadian actor and musician.

Federsee is a lake located just north of Bad Buchau in the region of Upper Swabia in Southern Germany. It is surrounded by moorland, partially overgrown with reeds. With a size of 33 km2, the area is one of the largest, groundwater fed, connected moorlands in Southern Germany. At its deepest point, Lake Federsee has a depth of 2 metres. Federsee translates to 'feather lake' and its shape resembles that of a feather. However, the origin of its name is locally debated, with one camp defending the shape theory, and another championing the idea that the amount of feathers found on the lake's surface gave rise to its name. The most probable explanation for the origin of the name is, however, the Celtic word "pheder" which means marsh. Therefore, the name refers to the origin of the lake itself and the surrounding landscape. The lake is encircled by the town of Bad Buchau, and the villages of Moosburg, Alleshausen, Seekirch, Tiefenbach, and Oggelshausen.

Tiefenbach is a town in the district of Biberach in Baden-Württemberg in Germany.

Tiefenbach is a municipality in the district of Landshut in Bavaria in Germany. The Isar River flows through the municipality.

Tiefenbach is a municipality in the district of Passau in Bavaria in Germany.

Tiefenbach is a municipality in the district of Cham in Bavaria in Germany.

Peter Tiefenbach may refer to:

Briga is a small settlement northwest of Banja Loka in the Municipality of Kostel in southern Slovenia. The area is part of the traditional region of Lower Carniola and is now included in the Southeast Slovenia Statistical Region.

Tiefenbach halting point, sometimes described as Tiefenbach station, or Tiefenbach railway station, is a metre gauge railway passenger facility, on the eastern side of the Furka Pass, in the Canton of Uri, Switzerland.

Rudolf von Tiefenbach was a German military commander who served the Holy Roman Empire during the Thirty Years' War. 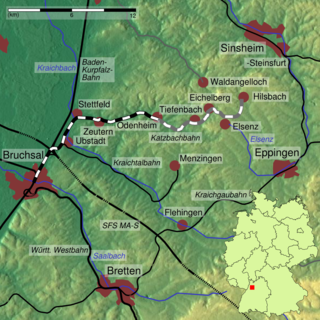 The Katzbach Railway is a branch line in southwestern Germany from Bruchsal to Odenheim that opened in 1896, and was extended in 1900 to Hilsbach. In 1960 services between Tiefenbach and Hilsbach were withdrawn, in 1975 the section between Odenheim Ost and Tiefenbach followed and, in 1986, the 600-metre-long section from Odenheim station to Odenheim Ost was closed. Since 1994 the line has been operated by the Albtal-Verkehrs-Gesellschaft (AVG), who electrified it in 1998 and integrated it into the network of the Karlsruhe Stadtbahn.