Tiefensee is a surname. Notable people with the surname include:

Roger Tiefensee is a Swedish Centre Party politician, member of the Riksdag since 2002. After the Swedish general election, 2006, he was named the Centre Party's parliamentary group leader.

Siegfried Tiefensee was a German musician and conductor.

Wolfgang Tiefensee is a German SPD politician. He was the Federal Minister for Transport, Building and Urban Development in the grand coalition cabinet led by Angela Merkel between 2005 and 2009. Since 2014, he has been the State Minister of Economy, Science and the Digital Society in the government of Thuringia's Minister-President Bodo Ramelow

Schröder (Schroeder) is a German surname.

Kętrzyn (listen), is a town in northeastern Poland with 28,351 inhabitants (2004). Situated in the Warmian-Masurian Voivodeship, Kętrzyn was previously in Olsztyn Voivodeship (1975–1998). It is the capital of Kętrzyn County. The city was named after Wojciech Kętrzyński in 1946.

The German word Müller means "miller". It is the most common family surname in Germany, Switzerland, and the French départements of Bas-Rhin and Moselle and is the fifth most common surname in Austria. Other forms are "Miller" and "Möller". Of the various family coats of arms that exist, many incorporate milling iconography, such as windmills or watermill wheels.

Adolf Reichwein was a German educator, economist, and cultural policymaker for the SPD. He was also a resistance fighter in Nazi Germany.

Schmid is a German surname that is a cognate of "Smith", an occupational surname for a blacksmith. The spelling is more common in Switzerland than Schmidt or Schmitt. Notable people with the surname include:

Siemianów is a village in the administrative district of Gmina Borów, within Strzelin County, Lower Silesian Voivodeship, in south-western Poland. Prior to 1945 it was in Germany.

Głębocko is a village in the administrative district of Gmina Grodków, within Brzeg County, Opole Voivodeship, in south-western Poland. It lies approximately 9 kilometres (6 mi) east of Grodków, 20 km (12 mi) south of Brzeg, and 32 km (20 mi) west of the regional capital Opole.

Głębock is a village in the administrative district of Gmina Lelkowo, within Braniewo County, Warmian-Masurian Voivodeship, in northern Poland, close to the border with the Kaliningrad Oblast of Russia. It lies approximately 29 kilometres (18 mi) east of Braniewo and 68 km (42 mi) north of the regional capital Olsztyn.

Sepp is a surname. When borne by Estonian-descended people, it is usually derived from a word meaning "smith". 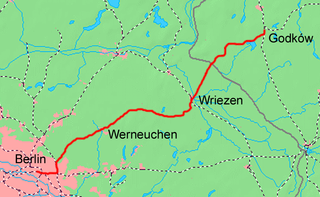 The Wriezen Railway is a line in the northeast of the German states of Berlin and Brandenburg. It runs from Berlin to Werneuchen and formerly extended via Wriezen to Jädickendorf. Its terminus in Berlin from 1903 to 1949 was the Wriezener Bahnhof. The predominantly single-track line has operated only between Berlin-Lichtenberg station and Werneuchen since December 2006. 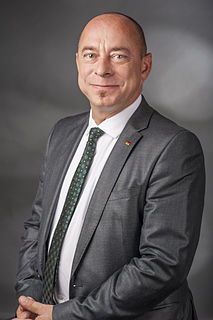 Thomas Wolfgang Feist is a German politician (CDU) as well as musicologist and cultural scientist. He served as an advisor for cultural activities, intercultural cooperation and music at the Evangelical Church in Saxony and was also chairman of the Federal Association for cultural activities in the Evangelical Youth Movement, Bundesverband Kulturarbeit in der evangelischen Jugend (BKA).

Volk is a surname. Notable people with the surname include: