Tieleman Roosterman (1598 – 1673), was a Dutch cloth merchant and friend of Willem van Heythuysen who is best remembered today for his portrait painted by Frans Hals.

Willem van Heythuysen, was a Dutch cloth merchant and hofje founder in Haarlem and Weert. He is best known today for his portraits by Frans Hals, though he is remembered locally for his Hofje van Willem Heythuijsen bordering Haarlemmerhout park, which has been in operation for centuries. 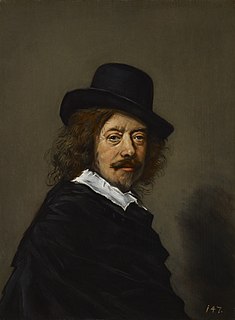 Frans Hals the Elder was a Dutch Golden Age painter, normally of portraits, who lived and worked in Haarlem. He is notable for his loose painterly brushwork, and he helped introduce this lively style of painting into Dutch art. Hals played an important role in the evolution of 17th-century group portraiture.

According to Pieter Biesboer he is possibly also the subject of the painting known as The Laughing Cavalier . [1] The portrait he is most known for was dated in 1634, and probably commissioned on the occasion of his wedding to Catharina Brugmans in 1631. [2] The Roostermans were rich textile merchants who lived in a large house on the Smedestraat and who associated with wealthy cloth merchants of Haarlem and Amsterdam. They baptised 10 children between 1633 and 1652. [2] The former occupants of their house was the family of Joseph Coymans, and like Coymans before them, they made use of the services of their neighbor, the notary Henrick van Gellinckhuysen. [2] Tieleman Roosterman was a good friend of Willem van Heythuysen and he was executor of his will and the first regent of the Hofje van Willem Heythuijsen. He had the hofje built from the proceeds of Van Heythuysen's estate. He sold his property Middelhout to Hendrick van Vladeracken, another wealthy Haarlem cloth merchant.

Pieter Biesboer, is a Dutch art historian and prolific writer on 17th-century Dutch art. His specialty is art from Haarlem. 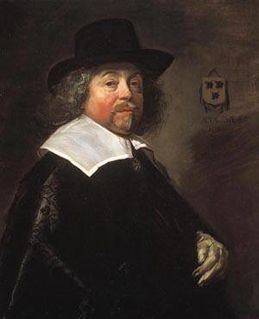 Joseph Coymans, was a Dutch businessman in Haarlem, known best today for his portrait painted by Frans Hals, and its pendant, Portrait of Dorothea Berck. The former resides at the Wadsworth Atheneum in Hartford, the latter at the Baltimore Museum of Art. A portrait of the couple's son Willem is held by the National Gallery of Art in Washington, D.C.

Hendrick was the father of Geldolph and Susanna van Vladeracken. Susanna succeeded Tieleman Roosterman as regent of the Hofje van Heythuysen, and Geldolph married the Roostermans' daughter Maria on 18 November 1674. The wedding papers of Geldolph were signed by his sister and Dorothea Berck, the widow of Joseph Coymans, who was signing as the grandmother of Geldoph's first wife Anna Druyvesteyn, who had died young in 1672. [3]

He was buried in the St. Bavochurch near his friend Willem van Heythuysen and his wife followed him in 1677. Their house in the Smedestraat continued to be occupied by their son Hendrick until his death. [2] 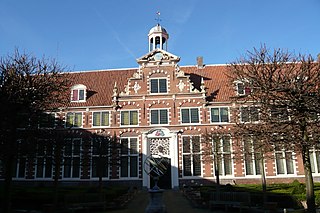 The Hofje van Willem Heythuijsen is a hofje in Haarlem, Netherlands. It was founded in 1650 by the testament of Willem van Heythuysen on the site of his summer residence outside the city walls of Haarlem on land that was considered Heemstede property until it was annexed in 1927. It is one of the few hofjes of Haarlem to be built outside the city walls. It has a 'T' shape and has a small open courtyard and a garden still intact.

The Laughing Cavalier (1624) is a portrait by the Dutch Golden Age painter Frans Hals in the Wallace Collection in London, which has been described as "one of the most brilliant of all Baroque portraits". The title is an invention of the Victorian public and press, dating from its exhibition in the opening display at the Bethnal Green Museum in 1872–75, just after its arrival in England, after which it was regularly reproduced as a print, and became among of the best known old master paintings in Britain. The unknown subject is in fact not laughing, but can be said to have an enigmatic smile, much amplified by his upturned moustache.

The Hofje van Codde en Beresteyn is a hofje in Haarlem, Netherlands. The current building is from 1968 and is located on the J. Cuyperstraat, which is named for the architect who designed the Cathedral of Saint Bavo next door, Joseph Cuypers. This hofje is the wealthiest hofje foundation in Haarlem with the most modern facilities for its inhabitants. Poor (devote) Catholic women of Haarlem 60 years and older are still welcome to live there for free.

Pieter Claesz Soutman was a Dutch Golden Age painter and printmaker from Haarlem. 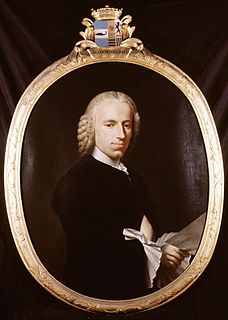 Paulus van Beresteyn, was a Dutch lawyer in Haarlem, known best today for his portrait painted by Frans Hals in 1619.

Pieter Jacobsz Olycan, was a Dutch brewer, magistrate, and later mayor of Haarlem, best known today for his portraits by Frans Hals, as well as for the portraits of his wife Maritge Claesdr. Voogt.

Isabella Coymans, was the Dutch wife of Stephanus Geraerdts best known for her portrait painted by Frans Hals.

Portrait of Dorothea Berck is a 1644 painting by Frans Hals that is in the collection of the Baltimore Museum of Art. It depicts Dorothea Berck at age 51, the wife of the prosperous Haarlem merchant Joseph Coymans, whose portrait Hals also painted. Both paintings were executed on the occasion of their daughter Isabella's wedding, whose marriage pendants Hals also painted.

Gijsbert Claesz van Campen, was a Dutch cloth merchant of Haarlem who is most famous today for his family portrait painted by Frans Hals. The sitters in this painting have been identified by Pieter Biesboer as the family of Gijsbert Claesz. van Campen and is today split into three parts; the left half is in the collection of the Toledo Museum of Art, with an extra baby lower left added by Salomon de Bray in 1628, the center half is in the collection of the Royal Museums of Fine Arts of Belgium, Brussels, and a third fragment on the far right from a European private collection make up the three known surviving pieces of the original portrait. These three segments were reunited at the Toledo Museum of Art for an exhibition October 18, 2018 – January 6, 2019. The exhibition is scheduled to travel to the RMFAB in Brussels from February 2 to April 28, 2019 and the Collection Frits Lugt in Paris, June 8 to Aug. 25, 2019. 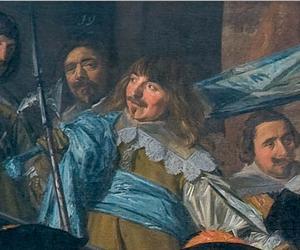 Jacob Druyvesteyn was a Dutch lawyer and mayor of Haarlem.

The following are pendant portraits by Frans Hals painted on the occasion of a marriage or marriage anniversary. This list is a subset of the list of paintings by Frans Hals, showing the marriage portraits side by side.