Last updated February 06, 2020
Not to be confused with Tieguanyin, another type of oolong tea from Fujian province..

Tieluohan or Tie Luo Han (simplified Chinese : 铁 罗 汉 ; traditional Chinese : 鐵 羅 漢 ; pinyin :tiěluóhàn; pronounced [tʰjè.lwǒ.xân] ) is one of the Four Great Oolongs and a light Wuyi tea. Tieluohan is the cultivar responsible for one of the four best known Yán chá, "rock teas" grown on cliffs in the Wuyi Mountains in northern Fujian Province, China. Legend tells that this tea was created by a powerful warrior monk with golden-bronze skin, hence the name Tieluohan, which means "Iron Arhat" or "Iron Warrior Monk".

The color of the leaf is an intense green and the resulting tea is of a lighter color. The taste of the tea should be full-bodied and supple, with gentle floral notes and the traditional long-lasting finish. 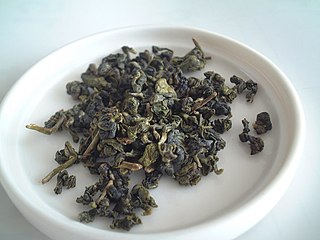 Oolong is a traditional semi-oxidized Chinese tea produced through a process including withering the plant under strong sun and oxidation before curling and twisting. Most oolong teas, especially those of fine quality, involve unique tea plant cultivars that are exclusively used for particular varieties. The degree of oxidation, which varies according to the chosen duration of time before firing, can range from 8–85%, depending on the variety and production style. Oolong is especially popular in south China and among Chinese expatriates in Southeast Asia, as is the Fujian preparation process known as the Gongfu tea ceremony. 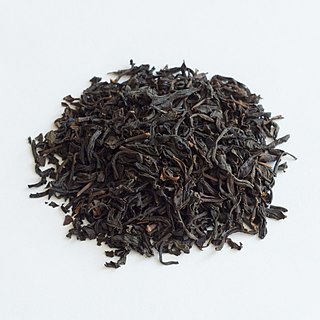 Lapsang souchong, sometimes referred to as smoked tea (熏茶), is a black tea that is originally from the mountainous Wuyi region in the province of Fujian in China. It is distinct from other types of tea, as the leaves are traditionally smoke-dried over pinewood fires, imparting a distinctive flavor of smoky pine. 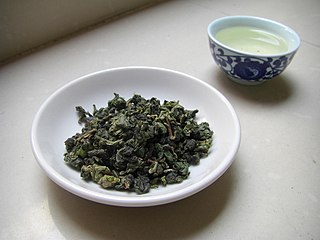 Tieguanyin is a variety of Chinese oolong tea that originated in the 19th century in Anxi in Fujian province. Tieguanyin produced in different areas of Anxi have different gastronomic characteristics.

The Wuyi Mountains or Wuyishan are a mountain range located in the prefecture of Nanping, in northern Fujian province near the border with Jiangxi province, China. The highest peak in the area is Mount Huanggang at 2,158 metres (7,080 ft) on the border of Fujian and Jiangxi, making it the highest point of both provinces; the lowest altitudes are around 200 metres (660 ft). Many oolong and black teas are produced in the Wuyi Mountains, including da hong pao and lapsang souchong.

Rougui tea is a variety of the tea plant, commonly grown in the Wuyi Mountains and processed into oolong tea. The name literally means "cassia". The tea can be difficult to prepare, but its distinctive sweet aroma can be brought out up to 7 steepings. It was first developed during the Qing dynasty.

Shui Hsien tea, meaning narcissus or water sprite, is an oolong tea from the Wuyi Mountains in Fujian Province, China with a heavy honey fragrance. Cheaper varieties are grown elsewhere in the province and have a burnt taste and are very popular with Chinese restaurants. The infused color is very dark brown showing that the tea is a very dark Oolong. This tea is also grown in Taiwan.

Da Hong Pao is a Wuyi rock tea grown in the Wuyi Mountains. It is a heavily oxidized, dark oolong tea. The highest quality versions frequently sell as the world's most expensive tea. In China, it is often reserved for honored guests.

Huang Meigui is a very new Wuyi oolong tea, developed c. 2002. It has a highly aromatic fragrance and a lighter floral taste than most other Wuyi oolongs.

Jin Fo tea is a Wuyi Oolong tea, developed at the Wuyi Shan Tea Researching Center located in Fujian Province, China. It is a medium Wuyi Oolong showing both creaminess and a floral aftertaste. The tea leaves have a uniform emerald green colour.

Shui Jin Gui is a Wuyi oolong tea from Mount Wuyi, Fujian, China. Its name literally means 'golden water turtle'. The tea produces a bright green color when steeped and is much greener than most other Wuyi oolong teas. It is one of the Si Da Ming Cong, the four famous teas of Wuyi.

Si Da Ming Cong is a collective term referring to four famous Wuyi oolong tea bush varieties and the tea beverages made from them, namely:

Wuyi tea, formerly known by the trade name Bohea in English, is a category of black and oolong teas grown in the Wuyi Mountains of northern Fujian, China. The Wuyi region produces a number of well-known teas, including Lapsang souchong and Da Hong Pao. It has historically been one of the major centers of tea production in Fujian province and globally. Both black tea and oolong tea were likely invented in the Wuyi region, which continues to produce both styles today.

Qilan is a very mild Wuyi oolong tea. It has an obvious sweet and nutty aroma.

Huang Guanyin tea is a Wuyi oolong with a creamy taste. It can be either tightly rolled like Anxi Oolongs or in strips like conventional Wuyi Oolong. 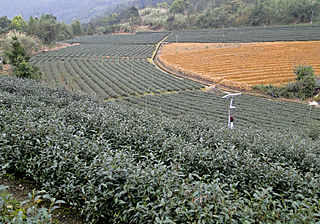 Taiwanese tea culture includes tea arts, traditional tea ceremonies, and the social aspects of tea consumption. While the most common teas consumed in Taiwan are oolongs, especially Taiwanese oolongs such as Alishan and Lishan, black, red and green teas are also popular. Many of the classical arts can be seen in the tea culture, such as calligraphy, flower arts, and incense arts. Most people in Taiwan drink tea, and tea serves not only as a drink, but also as a part of the culture. The tea culture of Taiwan can be traced back to its roots in Chinese tea culture. Many people visit one of the numerous traditional tea houses or "tea-arts" shops, located all over Taiwan. 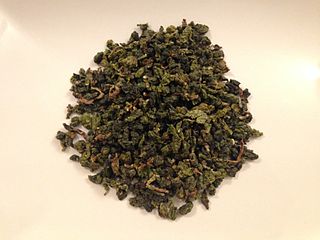 Huangjin Gui is a premium variety of Chinese oolong tea traditionally from Anxi in Fujian province. Named after the yellow golden color of its budding leaves and its unique flowery aroma, it is said to be reminiscent of Osmanthus. 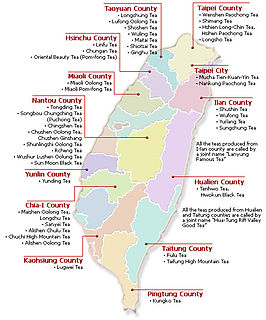 Taiwan is famous for its tea which are of four main types: oolong tea, black tea, green tea and white tea. The earliest record of tea trees found in Taiwan can be traced back to 1717 in Shui Sha Lian (水沙連), present-day Yuchi and Puli, Nantou County. Some of the teas retain the island country's former name, Formosa.

Dong Ding, also spelled Tung-ting, is an oolong tea from Taiwan. A translation of Dong Ding is "Frozen Summit" or "Icy Peak", and is the name of the mountain in Taiwan where the tea is cultivated. Those plants were brought to Taiwan from the Wuyi Mountains in China's Fujian Province about 150 years ago.