Tiempos compulsivos happens in a therapeutic space that houses outpatients with severe compulsions, some associated with pathologies in the psychiatric environment. The experienced Dr. Ricardo Buso (Fernán Mirás) will be in charge of a group of people with ailments of various kinds, Inés Alonso (Carla Peterson) compulsive to accumulation, obsessive of order and with eating disorders, Teresa Guglietti (Gloria Carrá) she has multiple personalities, always bidding to prevail over one another, Esteban Soldeyra (Rodrigo de la Serna) a mythomaniac psychopath but with an overwhelming lucidity, Gerardo Romero (Guillermo Arengo) workaholic and constant connectivity and Sofía Muntabski (Pilar Gamboa) she has her body plagued with wounds and scars that she inflicts herself to dull deeper pains. In daily group meetings, Ricardo will try to alleviate the discomfort that afflicts his patients, along with his faithful colleague and friend, Ezequiel Lambert (Juan Minujín) and a new doctor who joins this multidisciplinary work the psychologist Julieta Despeyroux (Paola Krum) This team of professionals will make them face their fears, their anguishes and desires, being the axis of their own dramas and, sometimes, the reflection or multiplication of the trauma of the other. In some moments, the therapists will observe them through the mirrored glass of the Chamber of Gesell, without this meaning that on one side there are the healthy and on the other the sick, doctors also suffer and will have to fight against their "own ghosts” similar to those that alter the well-being of their patients.

Para vestir santos is an Argentine comedy-drama television miniseries directed by Daniel Barone, which premiered on El Trece on 21 April 2010 and consists of thirty-six episodes. It stars Celeste Cid as Malena, Griselda Siciliani as Virginia and Gabriela Toscano as Susana, three sisters struggling after their mother's death.

Sres. Papis is an Argentine telenovela produced and broadcast by the Telefe network. It premiered on January 6, 2014 and ended on November 27 of the same year. It aired Monday through Friday, except Wednesdays, at 11:30 p.m. The series was written by Cecilia Guerty and Pablo Junovich, and directed by Gustavo Luppi, Omar Aiello and Pablo Vásquez. It starred Luciano Castro, Joaquín Furriel, Luciano Cáceres and Peto Menahem. 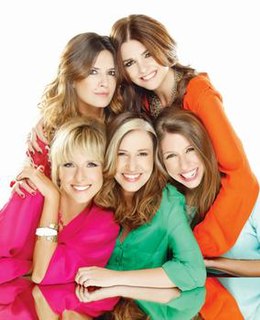 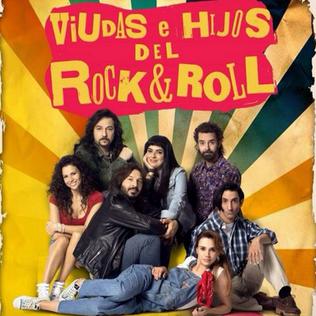 Viudas e hijos del Rock and Roll is a 2014 Argentine telenovela, starred by Damián De Santo and Paola Barrientos. It includes several references to the Argentine Rock of the 1990s.

Doce casas, Historia de mujeres devotas is a 2014 Argentine miniseries written and directed by Santiago Loza. A new fiction series produced by TV Pública and co-produced with Vasko Films, with the performance of great Argentine actresses of all generations. Its first broadcast was on March 31, 2014 which is broadcast from Monday to Thursday at 10:30 p.m. (UTC-3) on TV Pública.

Los ricos no piden permiso is a 2016 Argentine telenovela produced by Pol-ka and broadcast by Canal 13, which premiered on January 11, 2016 and ended on December 26, 2016. Starring Agustina Cherri, Gonzalo Heredia, Luciano Cáceres, Luciano Castro, Araceli González and Juan Darthés. Y Con starring Sabrina Garciarena and Alberto Ajaka. With the antagonistic participations of Julieta Cardinali, Eva De Dominici, Viviana Saccone. With the participation of the first actors Raúl Taibo and Leonor Benedetto. With the performances of Leonor Manso, Nicolás Riera, Alberto Martín, Malena Solda, Guillermo Arengo and Miriam Odorico. With the participation of the first actress Norma Aleandro. With the special participation of the actors Adrián Navarro, Bárbara Lombardo, Esteban Pérez, Mariano Torre and Gigí Ruá. It was transmitted from Monday to Thursday at 11 p.m., then at 10 p.m. and then transmitted from Monday to Friday at 9:30 p.m., on the screen of Canal 13. Finally, it was broadcast at the same time but from Monday to Thursday. 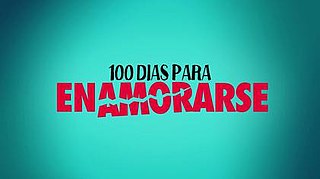 Cien días para enamorarse is a 2018 Argentine telenovela produced by Underground Producciones and broadcast by Telefe from May 7 to December 12, 2018.

Cowboy is a 2011 film directed by Juan Minujín, written by Facundo Agrelo and Juan Minujín and starring Juan Minujín, Guillermo Arengo and Daniel Fanego. The film premiered at the 2011 Zurich Film Festival and was released on September 29, 2011.