Tiento (Spanish pronunciation:  [ˈtjento] , Portuguese : Tento [ˈtẽtu] ) is a musical genre originating in Spain in the mid-15th century. It is formally analogous to the fantasia (fantasy), found in England, Germany, and the Low Countries, and also the ricercare, first found in Italy. By the end of the 16th century the tiento was exclusively a keyboard form, especially of organ music. It continued to be the predominant form in the Spanish organ tradition through the time of Cabanilles, and developed many variants. Additionally, many 20th-century composers have written works entitled "tiento".

The word derives from the Spanish verb tentar (meaning either to touch, to tempt or to attempt), and was originally applied to music for various instruments. In the early eighteenth century, some composers also used the term obra, originally a more general term meaning "work", to refer to this genre. [1]

The tiento is formally extraordinarily diverse, more a set of guidelines than a rigid structural model such as fugue or rondo. Nearly all tientos are imitative to some degree, though not as complex or developed as the fugue. This has led to their being associated with the other embryonic imitative forms cited above. Similarly, it is difficult to assign a single texture to the form, since it underwent a considerable amount of evolution from its inception to its decline in the late 18th century. The earliest tientos (such as those of Cabezón) were stylistically quite close to the ricercare in their extended use of the strict, motet-style counterpoint. Later (especially in the works of Cabanilles), tientos would frequently alternate between the older style of strict counterpoint, and virtuosic, affective figuration typical of the toccata and some fantasias. The evolution of the form was in part conditioned by the evolution of the Spanish organ, and it eventually came to include several variants or sub-forms, several of which are listed below:

Jean (Jehan) Titelouze was a French Catholic priest, composer, poet and organist of the early Baroque period. He was a canon and organist at Rouen Cathedral. His style was firmly rooted in the Renaissance vocal tradition, and as such was far removed from the distinctly French style of organ music that developed during the mid-17th century. However, his hymns and Magnificat settings are the earliest known published French organ collections, and he is regarded as the first composer of the French organ school. 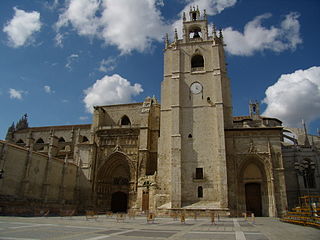 Antonio de Cabezón was a Spanish Renaissance composer and organist. Blind from childhood, he quickly rose to prominence as a performer and was eventually employed by the royal family. He was among the most important composers of his time and the first major Iberian keyboard composer.

A ricercar is a type of late Renaissance and mostly early Baroque instrumental composition. The term ricercar derives from the Italian verb ricercare which means to search out; to seek ; many ricercars serve a preludial function to "search out" the key or mode of a following piece. A ricercar may explore the permutations of a given motif, and in that regard may follow the piece used as illustration. The term is also used to designate an etude or study that explores a technical device in playing an instrument, or singing.

A fantasia is a musical composition with roots in improvisation. The fantasia, like the impromptu, seldom follows the textbook rules of any strict musical form.

The canzona is an Italian musical form derived from the Franco-Flemish and Parisian chansons, and during Giovanni Gabrieli's lifetime was frequently spelled canzona, though both earlier and later the singular was spelled either canzon or canzone with the plural canzoni. The use of canzone as the plural is sometimes found in Italian, but is not common. English uses the form canzona, with canzonas as the plural.

Charles Racquet (1597–1664) was a French organist and composer, best known for his monumental organ Fantaisie.

The year 1695 in music involved some significant events.

Manuel Rodrigues Coelho was a Portuguese organist and composer. He is the first important Iberian keyboard composer since Cabezón.

Juan Bautista José Cabanilles was a Spanish organist and composer at Valencia Cathedral. He is considered by many to have been the greatest Spanish Baroque composer, and has been called the Spanish Bach.

Girolamo (Hieronimo) Cavazzoni was an Italian organist and composer, son of Marco Antonio Cavazzoni. Little is known about his life except that he worked at Venice and Mantua, and published two collections of organ music. These collections only contain music written before about 1549, but are of high quality, and established the traditional form of imitative ricercars and canzonas.

Pablo Bruna was a Spanish composer and organist notable for his blindness, which resulted in his being known as "El ciego de Daroca". It is not known how Bruna received his musical training, but in 1631 he was appointed organist of the collegiate church of St. María in his hometown of Daroca, later rising to choirmaster in 1674. He remained there until his death in 1679.

Musica ricercata is a set of eleven pieces for piano by György Ligeti. The work was composed from 1951 to 1953, shortly after the composer began lecturing at the Budapest Academy of Music. The work premiered on 18 November 1969 in Sundsvall, Sweden. Although the ricercata is an established contrapuntal style, Ligeti's title should probably be interpreted literally as "researched music" or "sought music". This work captures the essence of Ligeti's search to construct his own compositional style ex nihilo, and as such presages many of the more radical directions Ligeti would take in the future.

Johann Krieger was a German composer and organist, younger brother of Johann Philipp Krieger. Born in Nuremberg, he worked at Bayreuth, Zeitz, and Greiz before settling in Zittau. He was one of the most important keyboard composers of his day, highly esteemed by, among others, George Frideric Handel. A prolific composer of church and secular music, he published several dozen of his works, and others survive in manuscript. However, hundreds more were lost when Zittau was destroyed by fire in 1757, during the Seven Years' War.

Montserrat Torrent i Serra is a Spanish organist.

Francis Chapelet the son of painter Roger Chapelet, is a French classical organist.