Tiergarten Schönbrunn (literally, "Schönbrunn Animal Garden"), or "Vienna Zoo", is a zoo located on the grounds of the famous Schönbrunn Palace in Vienna, Austria. Founded as an imperial menagerie in 1752, it is the oldest continuously operating zoo in the world.

Today, Tiergarten Schönbrunn is considered and regards itself as a scientifically administered zoo which sees its main purpose as a centre for species conservation and general nature conservation as well as in the fulfillment of the education mandate given to it by the legislation. The still preserved buildings of the baroque era, which have been complemented in the last years by elements of modern zoo architecture, still convey a good impression of the 18th century menagerie-buildings after the Versailles model.

The zoo was constructed in 1752 next to Schloss Schönbrunn by Adrian van Stekhoven at the order of the then Holy Roman Emperor, Francis I, husband of Maria Theresia, to serve as an imperial menagerie and is the oldest continuously operating zoo in the world. [2] It was centered around a pavilion meant for imperial breakfasts. Therefore, thirteen animal enclosures in the form of cut cake pieces were established around this central pavilion.

The central pavilions and the menagerie building were built by Jean Nicolas Jadot de Ville-Issey. A small zoo had already existed on the premises since 1540, but the complex was opened to the public only in 1779. Initially, there were no entrance fees.

Holy Roman Emperor Joseph II organized expeditions to Africa and the Americas to procure specimens for the zoo. The arrival of the first giraffe in 1828 influenced Viennese fashion and city life. Clothes', accessories', and other items' designs were influenced, and Adolf Bäuerle performed his play titled Giraffes in Vienna (German : Giraffen in Wien).

At the onset of World War I, the zoo was home to 712 species and 3,500 specimens. Due to diminishing food supplies during the war, the number of specimens rapidly sank to 900. After the dissolution of the Austro-Hungarian Empire after the war, the zoo became the responsibility of the Austrian Republic.

Bombing raids on February 19 and February 21, 1945, during World War II, had an even greater impact on the zoo. Many buildings were destroyed and specimens killed, reducing the stock of specimens to 400. The new zoo director, Dr. Julius Brachetka, eventually managed to restore the zoo.

The zoo experienced a financial crisis in the 1980s, but closure of the zoo was prevented by privatization in 1992. Dr. Helmut Pechlaner was assigned as manager of the zoo. After his retirement on 1 January 2007, his deputy, Dr. Dagmar Schratter, took over his post.

Pechlaner was able to renovate and extend many of the enclosures thanks to a number of sponsors and significantly increased entrance fees. During his time as manager, the zoo was extended by a number of new buildings, including the rainforest house, the desert house, and the "Tyrolean farmhouse". A number of rare and exotic specimens, such as giant pandas and koalas, were attracted to the zoo and contributed to its upswing in popularity.

Other zoo attractions include a rainforest house, in which the spectator is led through a simulation of the Amazon rainforest, an aquarium, which enables spectators to walk through underneath a simulation of the Amazon in flood, and, more recently, an exhibit of animals in unnatural habitats. [7] The new polarium for animals of the Arctic region was opened in early 2004.

From its privatization in 1992, it has been led by Helmut Pechlaner, also president of WWF Austria, who managed to modernize most parts of the zoo and sustain its financial situation. In 1998, Pechlaner requested Swedish elephant consultant Dan Koehl to retrain the elephants and form a new elephant team, when the zoo was forced to change the team of elephant keepers, during a period when the zoo was faced with an aggressive campaign concerning its keeping of elephants. [9]

Pechlaner was followed by Dagmar Schratter. In autumn 2019, Stephan Hering-Hagenbeck, former director of the Hagenbeck Zoo in Hamburg, was presented as her successor. He took up his duties as director of the Zoo in January 2020. [10]

Private and corporate sponsorship for the various animals is one of the methods employed by the zoo today, along with bookable night excursions and special children's programs. Zoological research takes place at the zoo.

Apart from 1998 when the zoo was faced with an aggressive campaign concerning its keeping of elephants, a number of tragic accidents have plagued the zoo. In 2002, three jaguars attacked a caretaker during feeding, killing her in front of zoo visitors. The director tried to help and sustained heavy arm injuries. In February 2005, a young elephant, Abu, lethally crushed his caretaker. In the following press storm, director Pechlaner offered to resign over the issue. [11]

The zoo is a filming location for the ORF series, Tom Turbo , which is based on a series of children's books by Thomas Brezina. Tom Turbo has its garage at the zoo since 2006, and is, together with its creator, sponsor of a tiger at the zoo. Former zoo director Pechlaner makes cameo appearances in a number of episodes. [12]

On its 250th anniversary, the zoo was the topic of one of the most famous silver collectors' coins: the 5 euro 250 Years of Vienna Zoo commemorative coin minted on 8 May 2002.

The reverse shows the Emperor's Pavilion surrounded by a variety of animals from the zoo. The dates 1752-2002 refer to the anniversary and also the year of the coin’s minting. 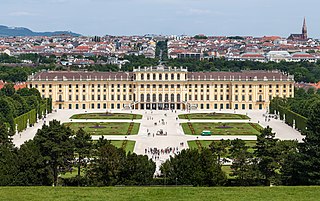 Schönbrunn Palace was the main summer residence of the Habsburg rulers, located in Hietzing, Vienna. The name Schönbrunn has its roots in an artesian well from which water was consumed by the court.

The year 1752 in science and technology involved some significant events.

The Berlin Zoological Garden is the oldest and best-known zoo in Germany. Opened in 1844, it covers 35 hectares and is located in Berlin's Tiergarten. With about 1,380 different species and over 20,200 animals, the zoo presents one of the most comprehensive collections of species in the world. 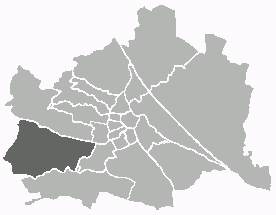 Hietzing is the 13th municipal District of Vienna. It is located west of the central districts, west of Meidling. Hietzing is a heavily populated urban area with many residential buildings, but also contains large areas of the Vienna Woods, along with Schönbrunn Palace. 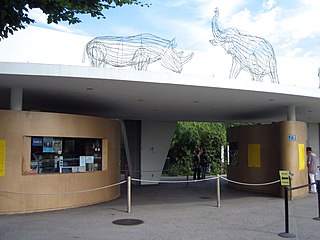 The Zoo Zürich is a zoo located in Zürich, Switzerland and is considered as one of the best zoos in Europe. Opened in 1929, it accumulated a collection of 2,200 specimens of 300 species by its seventy-fifth year. It is located on Zürichbergstrasse, on the lower reaches of the Zürichberg in the Fluntern quarter. 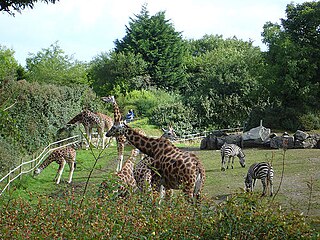 Belfast Zoological Gardens is a zoo in Belfast, Northern Ireland. It is located in a relatively secluded location on the northeastern slope of Cavehill, overlooking Belfast's Antrim Road, resulting in a uniquely tranquil environment for the animals that the zoo is frequently praised for.

The Austrian Zoo Organization is the union of the Austrian, scientifically lead zoos, which keep to the international guidelines of the EAZA.

The ménagerie du Jardin des plantes is a zoo in Paris, France, belonging to the botanical garden Jardin des Plantes. It is the second oldest zoological garden in the world. Today it does not have very large animals like elephants, but a lot of rare smaller and medium-sized mammals and a variety of birds and reptiles.

Otto Antonius was director of the Tiergarten Schönbrunn in Vienna, zoologist, palaeontologist and co-founder of the modern zoological biology.

The Wüstenhaus Schönbrunn is a desert botanical exhibit in Vienna, Austria. It is located in the Sonnenuhrhaus, which was built in 1904 as the newest of the four botanical houses in Schönbrunn Palace Park. The desert exhibit opened in 2004 as a counterpart to the “Rainforest House” that opened in 2002 in the nearby Zoo Vienna.

Franz Boos was an Austrian gardener-botanist in the Age of Enlightenment, a voyager and collector of natural history specimens for Emperor Joseph II of Austria, who reigned from 1765 to 1790.

The Verband der Zoologischen Gärten, until 2014 Verband Deutscher Zoodirektoren, is the leading association of scientifically managed zoological gardens in German-speaking countries. A zoo is considered to be scientifically managed if it is run by a director with an academic education, usually a biologist or a veterinarian, and if he or she follows and implements scientific standards of zoology, conservation, and zoo pedagogy. 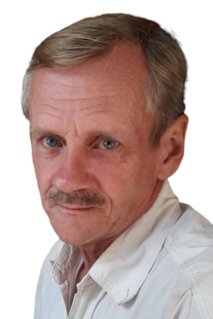