Tierisch Kölsch - Tales From the Domstadt Zoo, is a German television/documentary series. It was broadcast by the ZDF for nine seasons, from 2006-2010. Tierisch Kölsch presents the behind-the-scene stories of the Domstadt zoo, including both animal and employee stories.

Gerald Malcolm Durrell, was a British naturalist, zookeeper, conservationist, author, and television presenter. He founded the Durrell Wildlife Conservation Trust and the Jersey Zoo on the Channel Island of Jersey in 1959. His memoirs of his family's years living in Greece were adapted into two television series and one television film. He wrote approximately forty books, mainly about his life as an animal collector and enthusiast, the most famous being My Family and Other Animals (1956). He was the youngest brother of novelist Lawrence Durrell.

Kölsch may refer to:

Kölsch is a style of beer originating in Cologne, Germany. It has an original gravity between 11 and 14 degrees Plato. In appearance, it is bright and clear with a straw-yellow hue.

Colognian or Kölsch is a small set of very closely related dialects, or variants, of the Ripuarian group of dialects of the Central German group of languages. These dialects are spoken in the area covered by the Archdiocese and former Electorate of Cologne reaching from Neuss in the north to just south of Bonn, west to Düren and east to Olpe in northwest Germany.

Willy Millowitsch was a German stage and TV actor and the director of the Volkstheater Millowitsch in Cologne.

A zoo is a place where all animals are exhibited.

Bindi Sue Irwin is an Australian television personality, conservationist and zoo operator. When she was 9, Irwin hosted Bindi the Jungle Girl, a children's wildlife documentary TV series. She has also been involved in acting, singing, dancing, game show hosting, and has created two instructional fitness DVDs. She is also known for winning season 21 of Dancing with the Stars (US). She currently stars alongside her mother Terri and brother Robert in Crikey! It’s the Irwins.

Alphabet Zoo is a series of ten-minute programmes for young children, produced by Granada Television and was broadcast on ITV for two series in 1983 and 1984. It was presented by singer Ralph McTell and actress Nerys Hughes. Each episode is dedicated to a letter of the alphabet.

Dirk Bach was a German actor, comedian, and TV presenter, best known as the co-host of Ich bin ein Star – Holt mich hier raus!, the German version of I'm a Celebrity... Get Me Out of Here!.

Oliver Broumis is a German actor. He was born in Hannover, Germany on 31 July 1964, where he grew up. 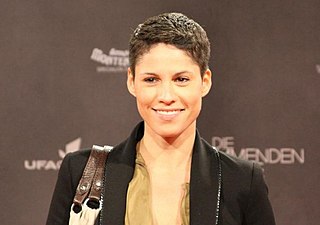 Jasmin Gerat is a German actress.

Elefant, Tiger & Co. is a German television series from the Central German Broadcasting which has been aired since 1 April 2003. It is considered to be the most successful German zoo docusoap. Its setting is Leipzig Zoological Garden.

SK Kölsch was German television series produced in Cologne, which was broadcast on Sat.1 from 1999 to 2006.

Gabriele Wilhelmine "Gaby" Köster is a German actress and comedian.