Tierps HK is a Swedish ice hockey club, based in Tierp, Uppsala County. The club, which was founded in 1957, played two seasons in Sweden's second-tier hockey league 2000–2002, but since then has been playing in the third-tier league, Division 1. [1] 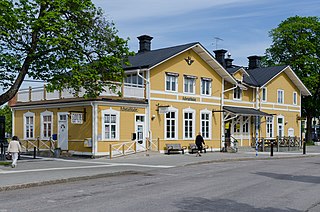 Tierp is a locality and the seat of Tierp Municipality, Uppsala County, Sweden with 5,587 inhabitants in 2010.

Nacka HK, officially Nacka Hockeyklubb, is a Swedish ice hockey club based in the Stockholm suburb of Nacka. As of the 2013–14 season, Nacka plays in group D of Division 1, the third tier of ice hockey in Sweden.

VIK Västerås HK is an ice hockey club from Västerås, Sweden. The team is currently playing in the second-tier league in Sweden, Hockeyallsvenskan. Västerås IK played 12 seasons in the top Swedish league Elitserien before the club went bankrupt and merged with the junior club, which changed name to VIK Västerås HK in 2005.

Örebro HK is a Swedish ice hockey club located in Örebro. The team is currently playing in the Swedish Hockey League, the top tier of Swedish ice hockey, since the 2013–14 season. The team's home arena is Behrn Arena, which seats 5,500 spectators.

Daniel Åhsberg is a Swedish professional ice hockey player who is currently a free agent. He previously played for Helsingborgs HC in the Swedish Hockeyettan.

Karlskrona HK is an ice hockey club located in Karlskrona, Sweden, established in 2001. They played in the second-tier league Hockeyallsvenskan between the 2012–13 and 2014–15 seasons. Their home arena is Telenor Arena Karlskrona which has a capacity of 5,050 spectators.

Nacka SK was a Swedish sports club based in the Stockholm suburb of Nacka. The club was notable in bandy but particularly in ice hockey, having played 23 seasons in the top tier of ice hockey in Sweden, though never managing to win the Swedish championship. The last ice hockey season the club played in the top tier was the 1971–72 Division 1 season. Following seasons in the second tier, and their failure to achieve promotion to Elitserien in the 1976 qualifiers, the club merged with Atlas Copco IF and Skuru IK to form NSA-76, which was then renamed Nacka HK in 1980.

The 2012–13 HockeyAllsvenskan season was the 8th season of the HockeyAllsvenskan, the second-highest level of ice hockey in Sweden. The regular season began on 12 September 2012 and ended on 2 March 2013, with the following playoffs and Kvalserien tournaments running until 5 April 2013. Leksands IF, following a season marked by financial instability and scandal, secured first place in the regular season standings, and continued to the qualification round for the 2013–14 SHL/Elitserien season, along with second-place Södertälje SK, third place VIK Västerås HK, and playoff winner Örebro HK. Meanwhile, 13th- and 14th-ranked Tingsryds AIF and Karlskrona HK were forced to defend their places in HockeyAllsvenskan for the 2013–14 season.

Örebro IK was an ice hockey team from Örebro, Sweden that was founded in 1972. The team filed for bankruptcy and was liquidated in 1999, after many years of playing elite-level hockey. Today, Örebro is represented in Sweden's upper-tier hockey leagues by Örebro HK.

The 2011–12 season of Division 1, the third tier of ice hockey in Sweden, began on 14 September 2011 and ended on 19 February 2012, with promotion and relegation tournaments continuing until 6 April. 56 teams participated in the league, divided into six geographical groups lettered A through F.

Sollefteå HK, also sometimes referred to as Sollefteå Hockey, is a Swedish ice hockey club which, as of the 2013–14 season, plays in Division 1, the third tier of ice hockey in Sweden. The team's most successful era came in the 1980s when they played in Sweden's second-tier league.

Mattias Johan Nilsson is a Swedish professional ice hockey defenceman, currently playing for Leksands IF in the Swedish Hockey League (SHL), the top-tier league in Sweden.

The 2014–15 HockeyAllsvenskan season was the tenth season of the second tier of ice hockey in Sweden under that name. The league featured 14 teams, including Stockholm-based AIK, who were relegated from the SHL following four seasons in the top league. Also joining HockeyAllsvenskan was HC Vita Hästen, which marked the return of elite-level hockey to Norrköping. A previous Vita Hästen club had played in Sweden's second-tier league until the 1995–96 season, but following that club's bankruptcy in 1996, the new Vita Hästen club rebuilt from the bottom of the league system, culminating in their promotion back to the second tier in the 2014 HockeyAllsvenskan qualifiers.

Linus Karlsson is a Swedish ice hockey centre who is currently playing with the Karlskrona HK organization of the HockeyAllsvenskan (Allsv). Karlsson was selected in the third round, 87th overall, of the 2018 NHL Entry Draft by the San Jose Sharks.