Last updated September 22, 2022
For other places with the same name, see Tierra Amarilla (disambiguation).
City and Commune in Atacama, Chile

Tierra Amarilla is a Chilean commune and city in Copiapó Province, Atacama Region. According to the 2012 census, the commune population was 12,898 and has an area of 11,191 km². [2]

As a commune, Tierra Amarilla is a third-level administrative division of Chile administered by a municipal council, headed by an alcalde who is directly elected every four years.

Within the electoral divisions of Chile, Tierra Amarilla is represented in the Chamber of Deputies by Alberto Robles (PRSD) and Giovanni Calderón (UDI) as part of the 6th electoral district, (together with Caldera, Vallenar, Freirina, Huasco and Alto del Carmen). The commune is represented in the Senate by Isabel Allende Bussi (PS) and Baldo Prokurica Prokurica (RN) as part of the 3rd senatorial constituency (Atacama Region).

The Atacama Region is one of Chile's 16 first order administrative divisions. It comprises three provinces: Chañaral, Copiapó and Huasco. It is bordered to the north by Antofagasta, to the south by Coquimbo, to east with Provinces of Catamarca, La Rioja and San Juan of Argentina, and to the west by the Pacific Ocean. The regional capital Copiapó is located at 806 km (501 mi) north of the country's capital of Santiago. The region occupies the southern portion of the Atacama Desert, the rest of the desert is mainly distributed among the other regions of Norte Grande. 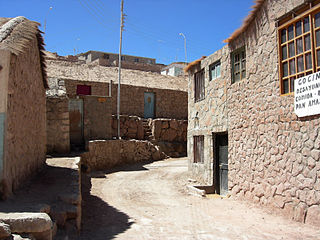 San Pedro de Atacama is a Chilean town and commune in El Loa Province, Antofagasta Region. It is located east of Antofagasta, some 106 km (60 mi) southeast of Calama and the Chuquicamata copper mine, overlooking the Licancabur volcano. It features a significant archeological museum, the R. P. Gustavo Le Paige Archaeological Museum, with a large collection of relics and artifacts from the region. Native ruins nearby attract increasing numbers of tourists interested in learning about pre-Columbian cultures.

Illapel is a Chilean city, which is the capital of the Choapa Province, Coquimbo Region. It lies along the Illapel River and marks the country's narrowest point along a parallel (94 km). It is located to the east of Los Vilos. 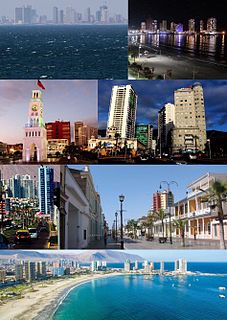 Iquique is a port city and commune in northern Chile, capital of both the Iquique Province and Tarapacá Region. It lies on the Pacific coast, west of the Pampa del Tamarugal, which is part of the Atacama Desert. It has a population of 191,468 according to the 2017 census. It is also the main commune of Greater Iquique. The city developed during the heyday of the saltpetre mining in the Atacama Desert in the 19th century. Once a Peruvian city with a large Chilean population, it was conquered by Chile in the War of the Pacific (1879–1883). Today it is one of only two free ports of Chile, the other one being Punta Arenas, in the country's far south. 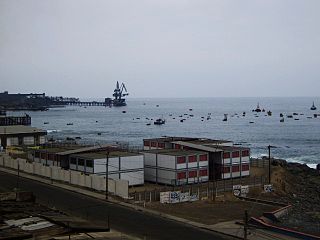 Tocopilla is a city and commune in the Antofagasta Region, in the north of Chile. It is the capital of the province that bears the same name. 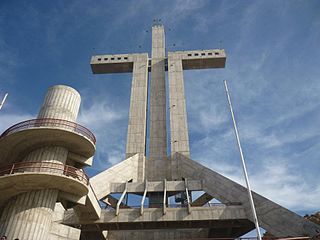 Coquimbo is a port city, commune and capital of the Elqui Province, located on the Pan-American Highway, in the Coquimbo Region of Chile. Coquimbo is situated in a valley 10 km (6 mi) south of La Serena, with which it forms Greater La Serena with more than 400,000 inhabitants. The commune spans an area around the harbor of 1,429.3 km2 (552 sq mi). The average temperature in the city lies around 14 °C (57 °F), and precipitation is low. 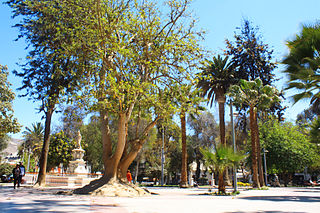 Copiapó is a city in northern Chile, located about 65 kilometers east of the coastal town of Caldera. Founded on December 8, 1744, it is the capital of Copiapó Province and Atacama Region.

Caldera is a port city and commune in the Copiapó Province of the Atacama Region in northern Chile. It has a harbor protected by breakwaters, being the port city for the productive mining district centering on Copiapó to which it is connected by the first railroad constructed in Chile.

Chañaral is a small coastal city and commune in the Atacama Region, Chile and capital of the Chañaral Province. It is largely unknown by tourists, who generally head straight for towns such as San Pedro de Atacama. The town has no high rise buildings. On the arid hills nearby is a lighthouse which casts a beam over the town during the night. Throughout the day and night, there is a lively atmosphere on the narrow streets. Despite it being coastal, it is not a typical seaside resort, partly because the ocean is contaminated by the copper mining industry. Situated a short distance to the north is the Pan de Azúcar National Park.

Huara is a Chilean town and commune in Tamarugal Province, Tarapacá Region. It is located 45 km (28 mi) or northeast of Iquique. The village is crossed by the Pan-American Highway and is the crossing point for the road that goes to Oruro in Bolivia. This road also serves as access to the Atacama Giant site and the Volcán Isluga National Park.

Andacollo is a city and commune in the Elqui Province, Coquimbo Region, Chile.

Vallenar is a city and commune in Atacama Region, Chile. It is the capital of the Huasco Province and is located in the valley of the Huasco River. Vallenar has 52,000 inhabitants. Its main activities are farming and mining. It was founded as San Ambrosio de Ballenary by Ambrose O'Higgins in 1789, after his birthplace in Ballynary in County Sligo, Ireland.

Copiapó Province is one of three provinces of the northern Chilean region of Atacama (III). Its capital is the city of Copiapó.

Huasco is a Chilean city and commune, in the Huasco Province, Atacama Region. 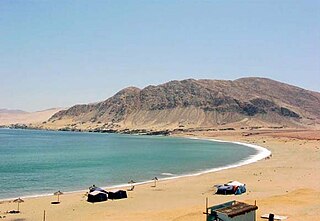 Taltal is a Chilean commune and city in Antofagasta Province, Antofagasta Region. According to the 2012 census, the commune has a population of 11,132 and has an area of 20,405.1 km2 (7,878 sq mi). The commune is home to Paranal Observatory and includes the northern portion of Pan de Azúcar National Park.

Diego de Almagro is a Chilean city and commune in Chañaral Province, Atacama Region. The commune has an area of 18,663.8 km2 (7,206 sq mi). The area is named after Diego de Almagro.

Alto del Carmen is a Chilean commune and village in Huasco Province, Atacama Region. The commune spans an area of 5,938.7 km2 (2,293 sq mi).