Tierra Nueva can refer to these locations

San Luis Potosí is a state in North Central Mexico that is divided into 58 municipalities.

Alianza Federal de Mercedes, which in English translates to Federal Land Grant Alliance, was a group led by Reies Tijerina based in New Mexico in the 1960s that fought for the land rights of Chicano New Mexicans.

During Spain's New World Empire, its mainland coastal possessions surrounding the Caribbean Sea and the Gulf of Mexico were referred to collectively as the Spanish Main. The southern portion of these coastal possessions were known as the Province of Tierra Firme, or the "Mainland province". 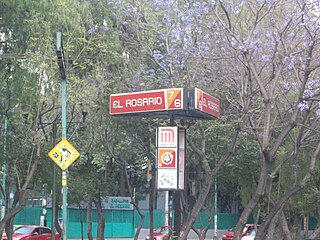 Metro El Rosario is a surface station on the Mexico City Metro. It is located in Azcapotzalco borough, in the northern reaches of Mexico City. It serves as the terminal for both Lines 6 and 7.

Agustín Yáñez Delgadillo was a notable Mexican writer and politician who served as Governor of Jalisco and Secretary of Public Education during Gustavo Díaz Ordaz's presidency. He is the author of numerous books and the recipient, in 1952 as member of the Academia Mexicana de la Lengua, in 1973, of the Premio Nacional de las Letras. Al filo del agua is universally acknowledge as his masterpiece, according to the Encyclopedia of Latin American and Caribbean literature, 1900-2003 By Daniel Balderston, Mike Gonzalez, page 616.

Nueva Italia is a city in the state of Michoacán, is located in Tierra Caliente Michoacana. 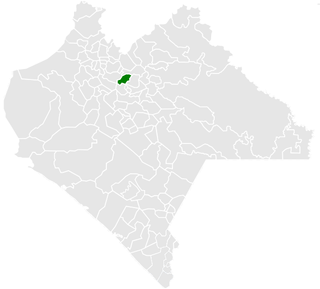 El Bosque, Chiapas is a town and one of the 122 Municipalities of Chiapas, in southern Mexico. It covers an area of 241 km2.

Frontera Comalapa is a town and one of the 119 municipalities of Chiapas, in southern Mexico. It covers an area of 717.90 km².

Jiquipilas is a town and one of the 119 Municipalities of Chiapas, in southern Mexico.

Tierra Nueva is a town and municipality in the state of San Luis Potosí in central Mexico. It has close to 5,000 inhabitants and is at 1,780 meters above sea level.

Tierras Altas District is a district (distrito) of Chiriquí Province in Panama. It was created by Law 13 of September 13, 2013, after splitting off from Bugaba District.

Nueva California is a corregimiento in Tierras Altas District, Chiriquí Province, Panama. It was established by Law 55 of September 13, 2013.

Las Juanas is a Mexican telenovela created Bernardo Romero Pereiro, based on the 1997 Colombian telenovela of the same name written by the same creator. The series originally aired from September 6, 2004 to March 4, 2005.